Ecstatic and rejuvenated after a visit to D. G. Wills Books in La Jolla, California. 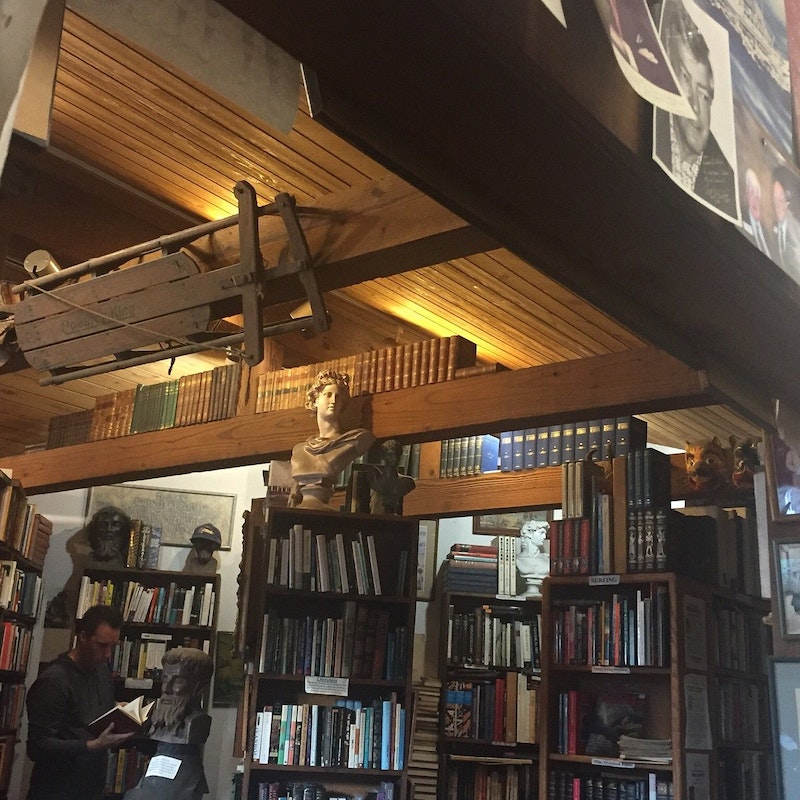 When you’re planning on a long trip that’ll take you through a variety of towns and places, you’ll inevitably get many recommendations on where to go and what to see. It’s impossible to see it all, especially when you’re on a strict schedule. But when we made our way across the country into La Jolla, California, I knew we’d have enough time to visit a bookstore recommended by a friend.

D. G. Wills Books on Girard Ave. was walking distance from our hotel. My friend sent me the link on the bookstore, and I realized this is no ordinary place. It’s been in existence since August 1979 (my birth month and year, so I consider this a nice touch) and has hosted famous literary figures, actors, scientists, and politicians.

On the website, I saw photographs of that scoundrel, Gore Vidal, that strange macho rebel, Norman Mailer, as well as Jim Belushi, Oliver Stone, and Sean Penn, and many Nobel Laureates. I haven’t spent much time seeking bookstores in the last few years, perhaps because I haven’t traveled too much. The instant we began to move away from the Pacific Ocean, the heat rose. We didn’t mind; after all, we were coming from Buffalo, NY where winters last a lot longer. High-end shops lined the streets we were passing. There were even shops for dogs only! You can take Sparky into the shop where he can get pampered and buy glitzy, designer costumes that are presumably reflections of his owners.

Years ago, when we traveled to Georgia, and visited Flannery O’Connor’s hometown of Milledgeville, every fourth or fifth building on some streets was a church. In La Jolla, every fourth or fifth building was a plastic surgery center, where the doctors will give you that natural look that you’ve been seeking. There’s nothing natural about it. The streets are adorned by older women, or should I say blitzed cougars whose gaze is in perpetual surprise (perhaps at the fact that their pampered dogs are pooping on the street?).

It was a fascinating sight, but something changed as we got closer to the bookstore. It was as if we entered a parallel universe, a world of reality, imperfection and enchantment. The bookstore was so welcoming that I felt I was entering someone's home and ought to ask if I should take my shoes off. Two men greeted us (and I found out later that one of them is owner Dennis Wills) and gave us some preliminary rules: no children past a particular line, and only one person at a time from one’s party. It’s understandable: the books are valuable and there are many nooks and crannies that can make the bookstore seem like a labyrinth (immediately, Borges’ labyrinths came to my mind). My husband and our son stayed behind, and my son picked Laurent de Brunhoff’s 1975 Babar and the Wully-Wully.

I didn’t have anything in particular in mind but did ask the owner to direct me into the American lit section. We struck up a conversation, and he asked me from where we travelled. As soon as I mentioned Buffalo, NY, his eyes lit up. Not because of the snow but rather the University at Buffalo and its famous English and Comparative Literature Departments. As it turns out, my PhD is from SUNY at Buffalo’s “comp lit dept,” and it was great to hear the excitement in someone else’s voice about the school.

I meandered through the bookstore. I wasn’t interested in getting new books but either something rare or used. Somehow, I always gravitate toward Willa Cather and Flannery O’Connor, and I found a collection of O’Connor’s letters (Good Things Out of Nazareth), which surprisingly I didn’t own. The shelves were double-stacked and you could get lost for hours. I liked the fact that I didn’t have anything specific in my mind, and then two books appeared, both by the great David Mamet, which I also purchased.

I was struck that such a bookstore still exists in this chaotic and technologically-driven world, and was happy that it does. Dennis, the owner, reminded me of my undergrad English professor, who remains in my memory as a kind person and also be an extremely intelligent intellectual (let’s face it, intellectuals are mostly self-centered pricks). I was a freshly arrived immigrant with only two years in America, a proud carrier of the Green Card, and could barely afford the bus fare to the college. Mel, my professor, gave me books, new and used. Such kindness given to a young Bosnian woman trying to make a sense of her life in America remains a sacred memory to me.

I brought myself back into the present and into the bookstore again. So much culture and passion contained in one place, in one America! There was Flannery: about as remote and different from La Jolla’s culture, and yet her books sit on the shelves, her wild and weird stories waiting to be read, Hazel Motes screaming off the page that he’s starting a Church without Christ. What a perfect representation of reality, or real madness and yearning for God and love and some semblance of order. How wonderfully embodied, going against current disturbance of the spirit.

In a letter to Sally Fitzgerald, Flannery O’Connor wrote, “Push back against the age as hard as it pushes against you.” Flannery was speaking about the necessity of religion, specifically Christianity, and the difficult task and a vocation of being a Christian. Yet, I still can’t help but think this bookstore is in some way pushing against the age in its own way. It’s not just a piece of Americana. It’s one small but important piece of America.

Here I was, in this La Jolla bookstore, shaken back into the past of my literary journeys. In the end, it really is the stories that keep us connected. No amount of politics or philosophy or any theory can supplant the beauty and grit of novels and stories about the people trying to figure out if they’re mad or if the entire world instead is mad. It may be a mad world out there but beauty remains unchanged.