How to Market Crummy Clothes to Frat Bros 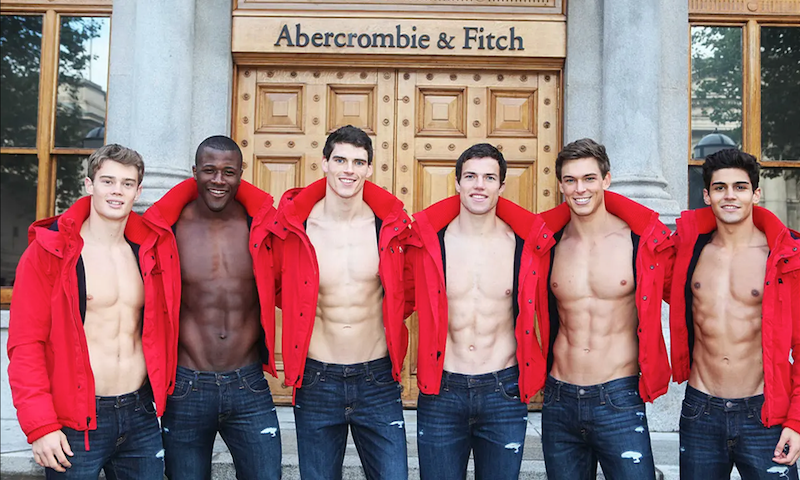 When Abercrombie & Fitch, a clothing company selling uninspiring shmatta (from a design point of view) rose up in the late-1990s and early-aughts to a position of cultural dominance, few understood that the firm was selling a gay fantasy to straight, gullible college kids. CEO Mike Jeffries, the firm's weirdo visionary, was gay, but he stayed closeted. Coming out would’ve hurt his sales.

Comedian George Carlin once said, "The reason I talk to myself is because I’m the only one whose answers I accept." That sort of lone-wolf attitude can produce great comedy, but it's not sustainable when applied to a publicly-traded, $5 billion company like Abercrombie & Fitch was before its downfall. Other voices need to be in the room when warning signs start popping up, and A&F had plenty of them.

When Jeffries sat down with Salon in 2006 for one of his rare interviews, his company was flying high. The Columbia Business School MBA had taken a failing brand associated with "fuddy duddy" clothes and transformed it into a firm generating annual sales of $2 billion. The recipe: merging sex with preppy to attract Midwestern college kids who fantasized about living in Malibu. Jeffries was a marketing genius who knew how to exploit the aspirations of the heartland youth.

But a firm's CEO needs more than marketing savvy to sustain success at the highest level. The Salon interviewer asked Jeffries how important sex and sexual attraction were to the firm's success, and he replied, "It's almost everything. That's why we hire good-looking people in our stores. Because good-looking people attract other good-looking people, and we want to market to cool, good-looking people. We don't market to anyone other than that." Jeffries thought he was good-looking and sexually attractive when he said that, but when he subsequently heard people saying he wasn't attractive enough to work for his own company, he got plastic surgeons to butcher his face, and then pretended he didn't look ridiculous.

Jeffries was targeting "cool kids." Wearing a shirt with "Abercrombie & Fitch" written on it might've made those uncertain about their coolness feel cool, but cool people don't need a brand name written on their shirt. Jeffries said he wasn't interested in connecting with the uncool set, but he was. The uncool were the ones who needed his shirts the most.

In the same interview, Jeffries admitted to being "exclusionary," which eventually took him down. Being exclusionary in business can work, but it's smarter to imply it and let the public figure it out. Jeffries' main problem was that he couldn't, or wouldn't, read the writing on the wall. In 2004, A&F paid almost $50 million (including the plaintiffs' legal fees) to settle a class-action suit brought by minority employees who said they were either denied employment or forced to work in back rooms. Another warning sign the bleach-blond CEO missed was the furor over Abercrombie & Fitch selling t-shirts with messages like, "Pizza Dojo—You Love Long Time—Eat In or Wok Out," and "Wong Brothers Laundry Service—Two Wongs Can Make It White." The shirts, which had caricatured depictions of Asian faces on them, lasted only a few days on store shelves before they were recalled and burned. A company spokesperson told the San Francisco Chronicle, "We personally thought Asians would love this T-shirt. The shirts were designed to appeal to young Asian shoppers with a sense of humor." As it turned out, that wasn't much of a market.

The new Netflix documentary, White Hot: The Rise & Fall of Abercrombie & Fitch, tells part of the story of A&F's meteoric rise, followed by a precipitous fall. A single anecdote that former employee Kjerstin Gruys recounted in the film sums up the essence of her former employer in one sentence. An executive told her they could write Abercrombie & Fitch on a hat with dogshit and sell it for $40. The brand was that hot at the time, but hot brands aren't built to last.

A Wall Street Journal writer shared another telling anecdote, talking about how she was regularly required to rank employees on an ascending scale, from "cool" to "rocks," and then send photos of them to company headquarters. She said HQ then told her to take employees not rated at least "cool" off the schedule, regardless of their sales numbers.

Never an A&F customer, I wasn't familiar with the firm's culture until watching this documentary. But a quick perusal of their old marketing material told that a gay aesthetic prevailed. Benoit Denizet-Lewis, who wrote the Salon interview piece, appears in this film. He nailed Abercrombie & Fitch's business model by pointing out that it was clear that there were many gay men involved the firm's sexualized marketing approach, but that it went right over the heads of their target audience, which was unsophisticated frat boys.

A&F relied heavily on high-profile photographer Bruce Weber to create its visual aesthetic. Weber's the author of Bear Pond, a collection of black and white photos of fit white males frolicking nude in bucolic settings. Abercrombie & Fitch marketing campaigns were essentially an extension of Bear Pond, with some token unclothed females thrown in so as not to give the secret away. Weber would later settle for an undisclosed sum after a number of male models sued him for sexual assault. In his defense, the lensman claimed he was merely conducting standard "breathing exercises," although the connection between the human respiratory function and the male genitalia remains a mystery.

Mike Jeffries got forced out in 2014 as A&F stock was in freefall. Apparently, he believed in this juvenile Angelina Jolie quote: "Anything that feels good couldn't possibly be bad." The focus of White Hot is the firm's racially discriminatory practices, which is a legitimate topic, but ultimately the documentary is boring because it glosses over a fascinating issue central to Abercrombie & Fitch's identity.

I spoke to Oliver Bateman, a former manager at A&F who wrote about his unsettling experience at the firm, as a recent college graduate, for Salon in a piece called "I sold my body (and nearly my soul) to Abercrombie." Of the firm's culture, he said, "It was essentially a white-gay-male-run operation that only liked male collegiate jocks who looked a very specific way. Women were an afterthought, even in the nude photos in their quarterly. The sexual orientation of the company came from the top, and it was that of aging white gay men who wanted to gaze at naked young jocks."