Mountain Dew's Dewmocracy campaign tests the limits of how many options soda drinkers are willing to have. 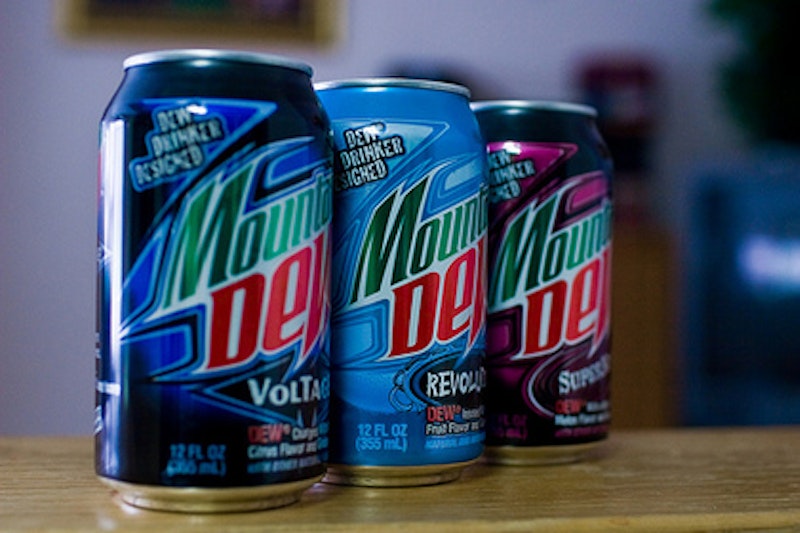 There was a girl in my English class—a loud, flirtatious girl who volunteered to be my high school’s fur-suited mascot, possibly out of her love of doing somersaults—who had recently come to America from Romania. “When I first got to America,” she said, “my family went to Cub Foods.” Something about the way she said it made me listen from across the room. Maybe because I had never heard anyone call it “Cub Foods.” To us, it was just Cub. Cub, in some way, meant food. “I could not believe how huge Cub Foods was!”

I pictured what a grocery store in Romania might look like: small, cramped, a tall counter full of pieces of meat wrapped up in white paper. The idea depressed me. What’s the fun of going to buy breakfast when you can’t pass by the row of economy-size Malt-O-Meal bags, consider saving a dollar, and then decide not to?

I had forgotten about the whole idea until I heard about Mountain Dew’s new “Dewmocracy” campaign from my boyfriend, Josh, who probably gets about half of his calories just from pop. (In Minnesota, we call it “pop,” mostly because we aren’t very good at saying “soda” and not sounding Norwegian.) Josh often talks about how there was just “something about Mountain Dew that makes it the best,” and he and his roommates were all in the thick of the Dewmocracy craze, buying the three new flavors: Supernova (strawberry and melon), Voltage (raspberry and citrus), and Revolution (the ambiguous wildberry).

Josh has a catalogue-like memory for different kinds of products. He has long kept track of all obscure flavors of soda, running to Taco Bell to get Mountain Dew Baja Blast (available only at Taco Bell) and reminiscing about the days of Pepsi Blue. He could handle it if Mountain Dew added three new flavors.

But the premise of the Dewmocracy suggests that most consumers can’t. For a certain, sure-to-cause-future-nostalgia amount of time, all three flavors will be in trial mode. Dew enthusiasts will have time to work them into their new daily routines, to chase vodka with them, to substitute them for real food. But after that trial period, the flavor that gets the most votes on their website is the one that will stick around. *

Some of Josh’s friends think they should keep all the flavors, but I wonder how many flavors a company can sustain economically. Assuming that Mountain Dew’s spending habits are the best indicator, they can probably only spend enough to throw one more flavor in the mix and see a return, at least in the long term. Already, there are Mountain Dew Code Red, Mountain Dew Live Wire, Mountain Dew Baja Blast, and diet versions. (And also Amp energy drink, which basically is Mountain Dew, but with more caffeine, and a taller, uglier can. I think it is for drinkers, as it is a competitor of Red Bull and Rock Star energy drink.)

Even if the company could afford to make everything from Mountain Dew Cinnamon Roll to Mountain Dew Lavender (and generate enough vending machines to sell it all), the marketers have a symbolic issue to worry about. It is the simple principle of consistency. You see a logo one place; you see it somewhere else. After awhile, you get a concept of a brand, a totality that is somehow infinitely reproducible no matter if you are in a high school hallway in Kentucky or a doctor’s office in Seattle. There’s got to be a point where Mountain Dew splits into so many variations that what exactly Mountain Dew is becomes unclear. Another example of this is the introduction of the new Mango Mojito cooler from Bacardi Silver. (That product confused me, because I was under the impression that a mojito was a lime and mint drink, and that introducing a mango into the mix would make it something other than a mojito.)

The essentials of Mountain Dew, to me, are that Mountain Dew is yellow, citrusy, and has more caffeine than the regular soda. So I can understand adding other fruit flavors, and the color changes that they cause. But Mountain Dew will always be less, let’s say, flavor-soluble than a cola, because it has to maintain its status as citrusy, whereas a cola can adapt to more from-the-bakery flavors, like Vanilla Coke Zero or Diet Chocolate Cherry Dr. Pepper. Admittedly, Pepsi Blue seems like a contradiction of all of this.

What makes the Dewmocracy important is that it openly acknowledges that Mountain Dew has reached its saturation point. Consider almost any product that you buy—most have some subdivision, and that subdivision is further subdivided. Take Nabisco’s Oreo cookie: when Oreos were introduced, there were lemon meringue and cream flavors. Cream was more popular, and lemon was cut out. Today, there are Double Stuf, Golden, Mini, White Fudge Covered, Halloween Orange, Pure Mint Chocolate, Spring Purple Crème, Banana Split, and limited edition Strawberry Milkshake. That list doesn’t count variations like organic, low-fat, or slight deviations like the Oreo Cakester.

Consider that the average American grocery store must accommodate not only several brands but also a generic no-ad brand. It’s no wonder that someone from a different country would think Cub Foods was the strangest thing they’ve ever seen. Every time we go to buy food, we encounter several choices of the same thing. What obvious point is there to stocking five different versions of the same product?

Mountain Dew can be forgiven for creating the obnoxious and tacky word “Dewmocracy.” At least once our food aisles reach the point where they can’t fit any more variations, we might get a say in what stays and what goes. Strawberry? Wildberry? Revolution!


*This may seem like a ploy to get kids to go to their website, and it might be. But the website is oddly free from outside advertising, being so much an ad for itself that the Dewmocracy would simply be taking people who already drink Dew, having them go online and look at pictures of Dew, and make them want to drink some more. It probably costs a lot to run.