Beating Bezos by nine days, at least this billionaire is trying to bring spaceflight to everyone. 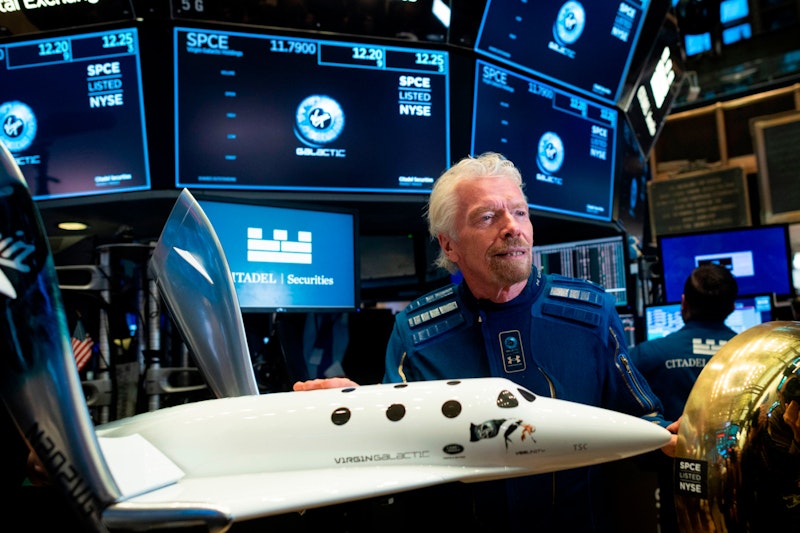 BEZOS BEATEN BY BRANSON! Good, maybe he has better reasons for wasting money on a trip to space. Let’s see:

“‘After more than 16 years of research, engineering, and testing, Virgin Galactic stands at the vanguard of a new commercial space industry, which is set to open space to humankind and change the world for good,’ Branson said in a statement. ‘I’m honored to help validate the journey our future astronauts will undertake and ensure we deliver the unique customer experience people expect from Virgin.’ The flight will be Virgin Galactic's fourth test spaceflight and its first mission with a crew of four on board.” So he’s put some time in. Good for him.

Still—don’t brag. Branson and his crew are headed skyward on July 11, just nine days before Jeff Bezos’ personal trip with his brother and half a dozen other unlucky billionaires. I wrote about Bezos’ braindead notions about going to space—It’s been my dream since I was five-years-old!—a month ago, and his dream remains as stupid and selfish as ever. I’m not asking the guy to build charities (though that would be nice), or even properly present films in their correct aspect ratios (though that would be nice), and I’m not even asking him to buy up a company like AMC or Cinemark and turn multiplexes into permanent playhouses for revivals, new movies, big movies, trash, blockbusters, whatever (though that, too, would be nice).

But shouldn’t the world’s richest man be a little more interesting? Shouldn’t he be well-read at least? I’m not asking for a college degree—far from it. I find Bezos’ startup success inspiring and essentially American: a guy with nothing going for him building a business empire out of his garage. What I can’t relate to is his obsession with gaining more and more power—and the way he talks about outer space, one imagines he considers our Earth already conquered, leaving the Final Frontier the only next step. But, like Elon Musk, he’s dim. I don’t mean he’s dumb, but he doesn’t have any ideas—and if he does, they’re bad, and he’s not telling us.

Branson, on the other hand, wants to be the first person to bring commercial spaceflights to the public. For now these trips are prohibitively expensive, but compared to Bezos’ personal flight, Branson comes off looking like Willy Loman, offering the world one new thrill as the rest of it appears to be sinking into the sea. Spaceflights must be beautiful, but if you can do it, you should set the stage for the rest of the world to do it, too. It’s hard to dismiss the possibility that Branson sped up his own launch to beat Bezos, who, reading between the lines of his most recent press statement, he regards as a selfish fraud:

"I’ve always been a dreamer. My mum taught me to never give up and to reach for the stars. This July, our dream will become a reality. And we're really excited to share that moment with you all. And when we return, I will announce something very exciting to give more people a chance to become astronauts, because space does belong to us all.”

Yes, indeed it does, Sir Richard!

This is a dig, and a glorious one, even if we’re dealing with another “evil billionaire.” But Branson hardly comes up when people invoke Bezos, Zuckerberg, or Musk these days. Perhaps it’s an American/British thing: Branson has never left the press for very long, but he doesn’t hang around. He doesn’t have scandals. He also doesn’t make a fool of himself or be obnoxious or oblivious about how to mask his lifestyle. He’s a public billionaire, but his persona is not “evil”—he’s a “benign billionaire,” a man that Leonardo DiCaprio probably publicly denounces but privately enjoys many things with. Many things.