The Klutz’s Way to Get High

Call it the decarb solution. 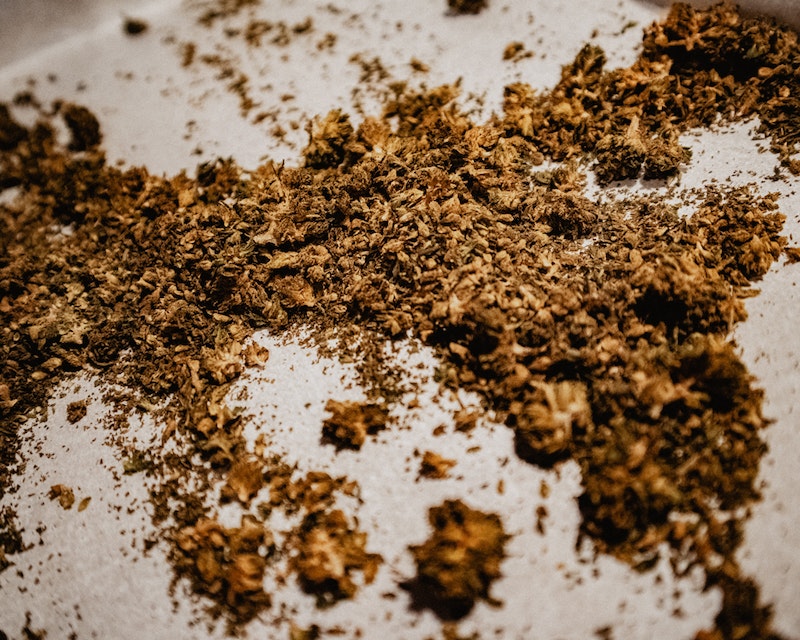 You don’t have to smoke anymore. You don’t have to cook. You don’t have to buy edibles. Put the marijuana in the oven and let it turn brown. Then you’re set. Get it out and have some when you feel like it. Eat a piece of bread with it, or a couple of carrots, or half a muffin. Eat enough of whatever so that your digestion starts up. It won’t take much. An hour or so later and you’re high, and you stay like that for hours more. I’m six feet tall and about 200 pounds, and a quarter of a teaspoon lasts me through the day and into the evening. It’s a comfortable high that sidles in and then folds you deep, and your organs and respiratory system pay zero price.

That’s decarb, the miracle solution. The name comes from decarboxylation, the chemical process triggered by the heat. THC can’t work until the cannabis is so hot that it burns; the trick is to do the burning someplace located far away from your lungs, such as an oven. Typically people use decarb to cook—pot brownies, pot soufflés, pot meringues, and so forth. But if you aren’t fancy, if you’re a klutz and easily frustrated, you can forget the ambitious stuff because none of it turns out to be necessary.

First, let the pot sit in a bowl for a day or so as it dries out. Then grind it up, the finer the better; the idea is for the heat to penetrate. Your hands will do, but it’s worth getting a coffee grinder. I have an ancient and dinky Salton that does the job, so price isn’t an issue here. The problem is handling the cannabis after you’ve turned it to dust. Go slow and be aware your palms may turn green because of wastage; the amount doesn’t really come to much.

Once the cannabis has been ground, put it in a mason jar or one of those little bowls they use for crème brulée. If you care about discretion, use the lid. The mason jar has a screw-on lid like normal, the crème brulée bowl has a rubber disk that’s laid atop it. Either way they’ll keep in the smell when the pot starts baking.

Now take a baking tray, place a folded oven towel on it, and then put the mason jar or crème brulée bowl on the towel. I usually set the oven at 320 degrees and wait 40 minutes, then put tray, towel, and jar (or bowl) on the most central of the oven’s racks. Closing the oven up, I wait another 40 minutes as the pot bakes. This procedure isn’t quite the same as the directions I got off the Internet, given that those call for 220 degrees and 60 minutes and make no mention of preheating. But I found that approach didn’t work, either because I’m too impatient or because my oven hardly ever gets used and needs something of a push.

At any rate you can look in and monitor progress. The cannabis turns dark green and then a satiny brown. I haven’t found a difference in effect between light brown decarb and dark brown. But don’t let it turn black, because by that point some or a lot of THC will have been scorched away. Baking an extra-long time doesn’t seem to have this effect, but baking at too high a temperature does. At least I found that an hour and a half at 320 did no harm but that 30 minutes at 430 did.

A confession: I’m not sure there’s any big reason to use the crème brulée lid and bowl. A website warned about contamination from using mason jars, but probably that had to do with making preserves. Personally I prefer the bowl and rubber disk because a mason jar’s lid can fuse in the heat, meaning you need a can opener. This problem may or may not seem worth avoiding to you.

I do know this. If you can turn on the oven and put things on top of each other, you can make decarb and that stuff will get you high. Life is just that simple after all.