Bozo Bezos and Brother in Space

What’s going on with this guy? Outer space? Why? There’s nothing there! 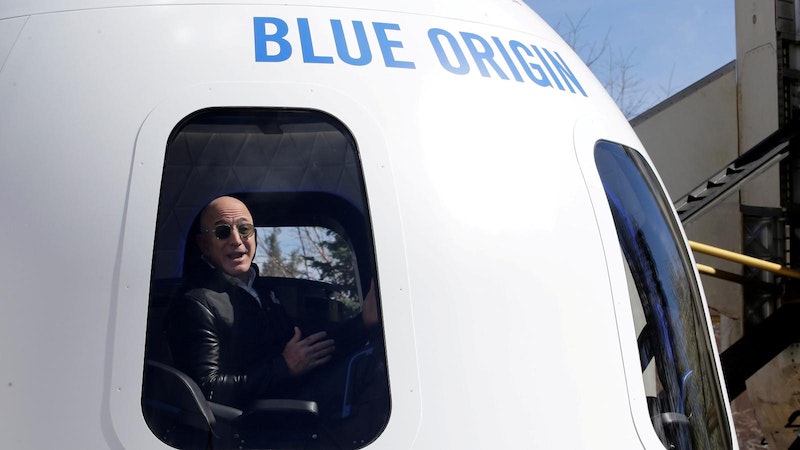 Jeff Bezos says, “I KNOW WHERE I’M GOING!” As he steps into the cockpit of his rocket ship and takes off for Mars, or somewhere even more boring: outer space. Dead, dead, dead, dead as a doornail, with nothing to offer us. Why are they going up out there? What does Elon Musk want to do on Mars? Colonize it? I suppose so—but why? Are we really going to relocate the human race? What about dogs? What about horses? Giraffes? I’m concerned about them. (Cats can stay). What worries me is that everyone that wants to go into outer space right now is a speculative Silicon Valley oligarch with delusions of grandeur stretching past the natural human life cycle.

I don’t want to live forever. Do you? It blows my mind that so many people took the principles of sci-fi movies like Gattaca and Blade Runner at face value. We don’t need to go into space. Send a drone: they get the job done, and if they fuck up and “die,” no one gets hurt. “No one,” my friend Rooster Quibbits would say, That robot had a consciousness, and it was weeping when it went. Maybe the WALL-E droids sent to rove Mars have had their sexual awakenings, but in the vast emptiness of space, what to do with all of this new information?

“Jeff Bezos will be flying to space on the first crewed flight of the New Shepard, the rocket ship made by his space company, Blue Origin… ‘Ever since I was five years old, I've dreamed of traveling to space,’ Bezos, 57, said in a Monday morning Instagram post. ‘On July 20th, I will take that journey with my brother. The greatest adventure, with my best friend.’” Congratulations, or in the event of a crash, sorry that happened. Why are you, as a 57-year-old man, spending such an ungodly amount of money on a childhood dream? Nowhere to go but up after becoming the richest person on the planet (with Musk close behind).

The man can do whatever he wants with his money, and it astonishes me how dumb it is. Space flight? Why? What are you going to see? The planet? How far are you going out? Apparently the trip is only going to last 11 minutes, which, considering civilian tickets are in the low millions, is pretty lousy. What are you going to see in 11 minutes? Nevertheless, he wants to be first: Richard Branson is shooting up later this year, and while Musk talks a big game about outer space, he has no public plans for now. Bezos and his brother are our tech canaries, with negative charisma, devoid of grace.

“Bezos has called Blue Origin ‘the most important work I'm doing,’ though he has not previously been open about whether he personally would like to travel to space. ‘I'm interested in space because I'm passionate about it… I’ve been studying it and thinking about it since I was a five year old boy—but that is not why I'm pursuing this work. I'm pursuing this work because I believe if we don't, we will eventually end up with a civilization of stasis, which I find very demoralizing.’”

What’s demoralizing about our planet? What does he know that we don’t? Probably plenty, but I doubt his space dreams have anything to do with an imminent disaster or alien invasion (Bezos founded Blue Origin in 2000). He really means this, and that’s pathetic, as the richest person in the world.

I’m not saying donate to charity. I’m not saying build a community center. I just mean do something cool instead, and maybe with some benefit for the people of Earth who you lord over (benevolently). Bezos isn’t Scrooge McDuck, and he’s not reptilian Mark Zuckerberg, and he’s not as open or willing to fail or embarrass in public as Musk. But what’s going on with this guy? I’m not talking about the sexts. What makes you reach that level of wealth in such a short period of time without some more inspired notions about what to do with that power? He could become a god among men and still live like a king—doesn’t he have any ideas? Isn’t he contributing to the “stasis” of our civilization by “pouring millions” into a dream he had when he was five?

Buying certain newspapers might be a smart PR move, but it’s not cool, or evil. Bezos has only leaned on The Washington Post regarding his personal life and Amazon, but he’s not William Randolph Hearst, swinging and rigging elections. Bezos, like his peers, has just nothing going on upstairs. Accumulation of assets isn’t innovation. At least Steve Jobs made stuff. Musk tries but keeps reinventing the wheel (and the car, and the subway, and the tunnel). Branson never cared about being king, but Bezos wants it. But what then? What the fuck is going on inside this guy’s head?