Eat As Much As You Want To

It’s your body, so I say pig out—even if you’re a pig. 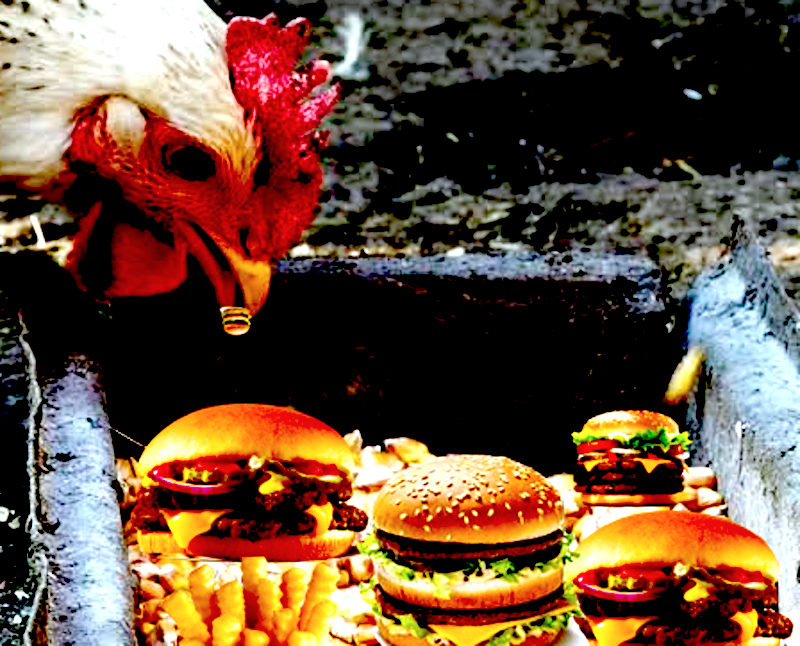 For millennia, female birds have had to put up with unrealistic expectations from the lesser and frankly dumber sex of our species. All they know is plump hide and lie. But that’s beside the point; nearly every living female on Earth deals with unrealistic male expectations on a daily basis, including but not limited to: being on time, not yelling, not being “overly emotional,” and most of all, making sure they don’t feel insecure. All roosters are afraid of measuring up to the best cock in town, whoever came before them. We all know the game of dance and territory: it’s not only cats that scratch when they’re horny.

Freud said (I’m assuming) that food and sex are closely linked, in the drives somewhere. Pretty amazing that an Austrian dude who died in the 1920s predicted hard drives. Almost makes you think he was a CIA plant. I mean, it’s plausible. Anyway, food and fucking are still smashed together, and usually people don’t like it. Look at A Dirty Shame, the 2004 movie that John Waters appears to have ended his career on. In that film, starring Johnny Knoxville alongside a crew of JW regulars like Mink Stole, a bunch of disgusting degenerates flesh out their kinkiest desires with butts and cum and donuts and cream. It sounds horrendous because it is, but I laughed. My husband didn’t.

He’s been rather cranky lately because I’ve put him on the keto diet. It’s better for his bones, and his hackle is starting to become less chapped. The only problem is that his feathers smell like cat food now. At night I make him sleep in the shed out back where Bennington used to live before he became a crack-cocaine prostitute wandering the streets of Buffalo. Good riddance, I hated that son of a bitch. Anyway, when my husband’s out back fasting, I’m inside the barn enjoying my vegan donuts and artisanal sandwiches made with artisanal vegan mayonnaise—my favorite condiment. You caught me lying if I ever told you I’ve never had the real thing. They’re not lying, the white people. It’s guuuud.

I’ll even cop to eating a McChicken once. What? And a Burger King Original Chicken Sandwich, the long boy. What’s wrong with that? Just because I’m a hen I’m not allowed to eat the flesh of my own? You can hardly call whatever “meat” they use related to me anyway. Besides, there’s so much other shit in there that whatever natural reflexes I’d normally have around dead comrade meat are apparently stymied by modern science. I think this is good. If it came to it, I’d eat a McDonald’s hamburger with ketchup and fries. I like the idea of going in, perusing the menu, ordering, sitting down with my date (a cow), and calmly eating our meal. This sounds like some weird sex thing but it’s actually about intimidating the human customers and making them face what they’re doing to the world around them.

But they’re related, too: food and fucking involve the guts. We know this through colloquialisms. When I smell McDonald’s fries wafting down parking lots and empty fields, I get the tightening in my stomach, the rumble in my intestines. It’s time to punish my body. Whoever invented that smell is in a deeper circle of hell than the guy that turned Zyklon-A into Zyklon-B. One should be able to smell poisonous gas, no? And should we not be able to spot with our noses foul and false food from a mile away? I think yes. The only reason this hasn’t happened yet is that the slaughterhouses have taken over the world. Jeff Bezos is not far from the factory line where our comrades and countrymen are turned into mash every day. He may sell you books, but he, like you, profits from our continued suffering and death.

But that’s okay with me for now. I have my chips. I have my cookies. I have my husband in the shed. And, most importantly, I have my McChicken. And I’d be lying if I didn’t say it was delicious.