Whose bright idea was it to put cats and rabbits on a rotisserie in the middle of Marshfield Hills? 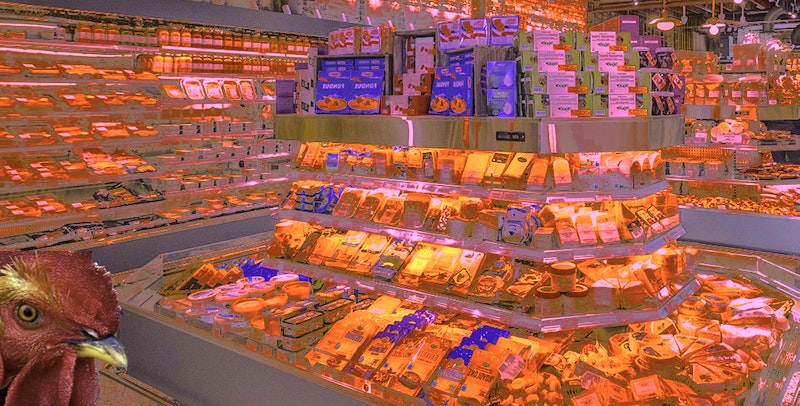 Recently a new grocery store opened up in town—and by “town,” I mean the woods. Marshfield Hills are cold and wet all year round, yet the local duck contingent was eager to become franchisees. The place is called “Trails”—a horrible name, too many dissonant associations (chemtrails, acid trails, blood trails, skid marks), and clearly a rip-off of the “Streets” stores popping up in the South (or the “DelMarVa area,” as the duck contingent calls it. I don’t like them. They’re always talking about how cool Baltimore is. Don’t drag queens subsist on dog shit down there? That’s not an East Coast city to me. New Orleans is more East Coast than Baltimore).

“We want a piece of the action.” Donald wasn’t coy with me, and he didn’t get cute. I felt like Tom Cruise getting lectured by Sydney Pollack at the end of Eyes Wide Shut. “You don’t understand: you have money. You’ve made something for yourself. Sure, cry in your beer, you haven’t been ‘relevant’ in several decades, but FINE! WHATEVER! You can put breadcrumbs by the pond. I can’t, and my family needs those crumbs. We need your breadcrumbs so that we can not only survive, but thrive.”

I asked him why he assumed I was one of the “good Samaritans” who left excess carbohydrates by small bodies of water. “All of you people are the same.” I asked him what he meant by that. “Because I’m a ‘chicken’?” He laughed. “Because you’re rich.” I insisted that Always a Stone had never been released, all copies were pulped shortly before the Brett Kavanaugh scandal, but he wouldn’t listen. Anyway, I lost, and the grocery store opened in Marshfield Hills last weekend. Hooray for Donald the Duck. He really hates when people call him that, so I’m going to from here on out. Donald the Duck greeted everyone at “Trails” with a wag of the bill.

This store sucks. Granted, I’ve only been there once, but Good Lord, would it kill them to have some quality vegan options? I mean, the amount of meat on sale here is a joke. The name is ostensibly a reference to “trail mix,” some kind of over-salted and over-sugared snack invented by human beings—gross, but not immoral. There’re certainly animal byproducts in there, which is haram, but nothing to do directly with murder. Not so with Trails: not only do they offer sliced ham, there’s a rotisserie in the back with spinning cats, dogs, rabbits, and foxes. Believe me, if someone from your world ever stepped into here, things would quickly devolve into Gulliver’s Travels, or a typical Peter Greenaway movie.

I don’t want to incriminate anyone, even someone I don’t like, but Trails sells human beings. Roasted, spinning on the rotisserie. It felt very strange to see a skinned human being spinning next to his “best friend” the dog (mortal enemy of the rooster and hen), more like walking into a sex club than going to the grocery store. It didn’t help that Donald decorated the place himself, and he gave the meat section a full BDSM vibe, very Hellraiser. “My tastes are… unconventional.” I think he was quoting Fifty Shades of Grey. At least he knows how to read. That’s more than I can say for the rest of the animal community around here.

Who, by the way, are not pleased with Donald for some of the meat he’s selling. There are bunnies and foxes and even dogs (evil) out here, you know, and they get mad. They’re a voting bloc, and shouldn’t be discounted. Having said that, I find them a bit hysterical and also that they should recognize their place in the food pyramid and acknowledge us as their masters, if not physically then certainly intellectually. Sorry, I don’t care how much they may “feel,” I’m smarter than a house cat. That much I know.

“You MURDERER!” One of those tuxedo bitches screamed that at me as I was leaving Trails with a bag of corn feed and sawdust, and I was in a mood, so I took off my leather jacket and whipped her in the face with it. I nearly went for a spur claw but saw it was unnecessary when Mrs. Tuxedo’s fur started turning very red, very quickly. I left before the crowd could catch up with me. Monica already said she’s never going there. “I don’t want to be around anyone that supports equal rights.” I love my wife so much it’s unreal.

Donald the Duck called the barn that night. “I heard what happened. Don’t worry, we’ve convinced her not to press charges, but all the same, you need to lay low and keep away from the store for at least…” So he doesn’t want my business. Guess I’m “cancelled” again. I hung up and sent a message to my new gofer Toby to throw a brick through his window and the grocery store. Donald can go fuck himself. Toby’s alright, but I miss having Bennington to boss around and abuse. Maybe someday he’ll come back. Then we can all be happy together again. I’m sure he’d get a kick out of that rotisserie spinning.