The “Two Baltimores” Are Back With a Vengeance 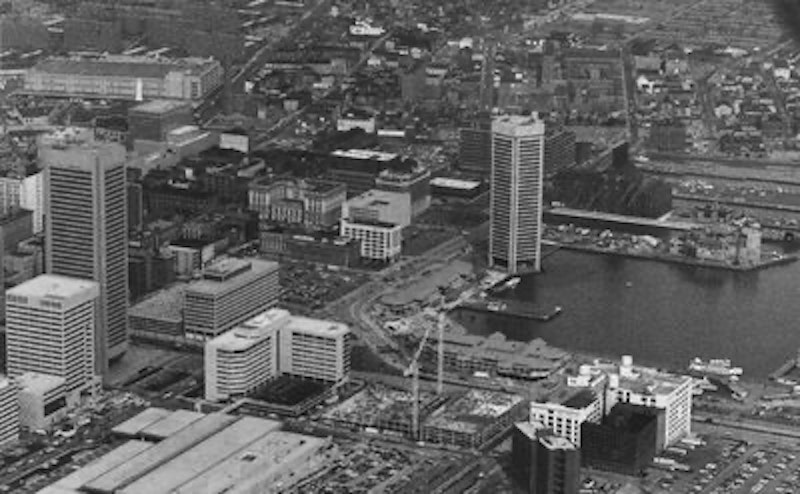 William H. “Billy” Murphy Jr., attorney for the aggrieved family of Freddie Gray, ran for mayor of Baltimore in 1983 on the campaign theme of two Baltimores—one for blacks and the poor and the other for whites and the rich. Murphy’s primary target was the city’s inadequate public school system, but the sweeping undercurrent was unmistakably City Hall’s cozy relationship with the business community and the neglect of Baltimore’s smudged neighborhoods.

Murphy got under the notoriously thin skin of the incumbent mayor, the persnickety William Donald Schaefer, who seethed and attempted to deflect Murphy’s poison-tipped barbs by pointing to the newly established Harborplace as his signal achievement and a signpost to the city’s future. Precisely Murphy’s point, though it seemed lost on Schaefer, even though Murphy lost the election—badly—that a few blocks away from the glitzy Inner Harbor the city was crumbling and its children were being shortchanged in their classrooms.

More than three years later, on the first day in 1987 that Schaefer began his two terms as governor, he phoned his successor as mayor, the up-from-the-locker-room Clarence “Du” Burns, Baltimore’s first black mayor, and gave him a characteristic Schaeferian stern Dutch-uncle lecture about the poor condition of the city’s schools and the neglect of its blighted neighborhoods—after Schaefer’s own four terms as mayor—as if the entire mess was Burns’ fault.

Murphy is now the public face of the Freddie Gray movement. Murphy is center-stage again, with a rare second chance to highlight Baltimore’s economic dichotomy by commanding not only the legal debate about municipal justice (compensation) for Gray’s death while in the custody of police but also the ubiquitous television cameras to reprise, as an attorney, his long forgotten, but suddenly relevant, campaign pitch. The two Baltimores are back with a vengeance; they really never left.

An empty stomach is a poor teacher. There are about 110,000 children in Baltimore’s public schools, which are 90 percent black. An estimated 85,000 of those kids receive government-provided meals, for many if not the only meal of the day then certainly the most substantial.

Many of those very same children were born out of wedlock to mothers who were drug addicts. They grew up fatherless in inner-city houses flaked with lead paint and usually in neighborhoods packed among the city’s 15,000 vacant and boarded-up houses and an equal number of vacant, trash-heaped lots.

The truancy rate is astoundingly high. And when the kids either drop out or graduate from school, the most accessible and almost the only economic activity within their reach is drug dealing. This is Freddie Gray’s home turf of Sandtown-Winchester, the epicenter of destruction, looting and conflagration and a para-military encampment on the west side of Baltimore. The unemployment rate within Sandtown-Winchester’s boundaries is 50 percent. Drive along Fulton Ave. and the ramshackle row-house steps are jammed with men staring, talking, many sipping from pint bottles wrapped in brown paper bags.

A couple of generations ago, beginning with World War II and into the 60s and 70s, there were good-paying industrial jobs in and around Baltimore where blacks and whites worked shoulder to shoulder and black home ownership was high—Bethlehem Steel, Glen L. Martin, General Motors, Bendix, Westinghouse, Western Electric and a handful of breweries and other plants. They have vanished, swallowed by globalization, mergers, technological advances and moves to right-to-work states.

Baltimore was a strong union town, where workers received guaranteed wages, job protection, benefits and a sense of working together by day and drinking Natty Boh by night. But the destruction of unions by the investor class has been a major contributor to the social hollowing out of Baltimore. It has helped to destroy lives and livelihoods. As the quality of life began to decline, the drug culture crept in and spread to where it now permeates every level in certain areas of the black community.

Schaefer thought he’d found a solution. He would rebuild Baltimore’s downtown by replacing the city’s industrial base with tourism as the new economic base. The state supplied the money and the building blocks for the resuscitation of the Inner Harbor—the World Trade Center, the Convention Center and the Baltimore Metro system. Together with Harborplace, they were designed to lure people downtown and homogenize the greater metropolitan area. Out-of-state tourists were a bonus. The harbor area got its needle-nosed fish tank and its yogurt stands and the rest of Baltimore got the Litter Patrol truck.

Schaefer was sometimes in error but never in doubt. The ironic twist here is that Schaefer was known as a neighborhood guy. So the shift to the water and away from the neighborhoods, to be kind, was likely more by momentum and the movement of capital than by design. Money follows money.

Muffin Man John Paterakis, for example, acquired the land for Harbor East through default on a personal loan. At the time, Paterakis, owner of H&S Bakery, protested that “I’m a baker, not a developer.” But with Schaefer’s prodding, Paterakis decontaminated the Allied Chemical site and built Harbor East. That hugely successful enterprise has pushed east to Fells Point, where Paterakis’ developer-successors as well as Kevin Plank, Under Armour owner, have staked their claims and are expanding the waterfront.

Desperate to rebuild the harbor area landscape as well as the city’s morale, Schaefer ceded valuable property to non-productive projects such as the Community College of Baltimore, which he later tried to evict and reclaim the site, and the monumentally unsuccessful Christopher Columbus Marine Research Center. He created what came to be exposed as the “Shadow Government,” a novel off-the-books slush fund to support the projects mainly of developer friends.

There were several inherent problems, however, that Schaefer either didn’t foresee or acknowledge most likely because they didn’t synchronize with his “do-it-now” philosophy. First, in a hurry, he virtually gave away the city’s interest and rights to Harborplace to the Rouse Company in addition to paying $18 million for infrastructure to sweeten the deal. Rouse wrote the lease to benefit Rouse and the city has never made a dime on the Harborplace give-away. Second, Inner Harbor businesses pay minimum wages at best. Most jobs call for sales clerks, waiters and dishwashers. And third, because of all the attention to the Inner Harbor and downtown, the rest of the city was allowed to fall into decline.

Today, developers are spending billions to build colonies of condos along the water, supported by millions in tax breaks from city government. There’s nothing wrong with that. It’s an iron law of development that once government installs roads and sewer lines the malls and condos will follow. But it’s a safe bet that not a commensurate nickel is being spent to resuscitate Sandtown-Winchester or any of the city’s other disaster areas.

Murphy didn’t just stumble into the issue of two Baltimores in 1983. They were there all the while as Schaefer pointed to the harbor and the back story was ignored. Now that State’s Attorney Marilyn Mosby has filed criminal charges against the six officers who allegedly contributed to Freddie Gray’s death, Baltimore is once again in the news for another reason after a week of notoriety for disturbances and protests of Gray’s death. The city may become a model for how to deal with police misconduct, if that turns out to be the case. And Murphy’s other Baltimore may finally get some attention.