We Do It For The Kids

The Orioles will never lose the love of drunk college kids. 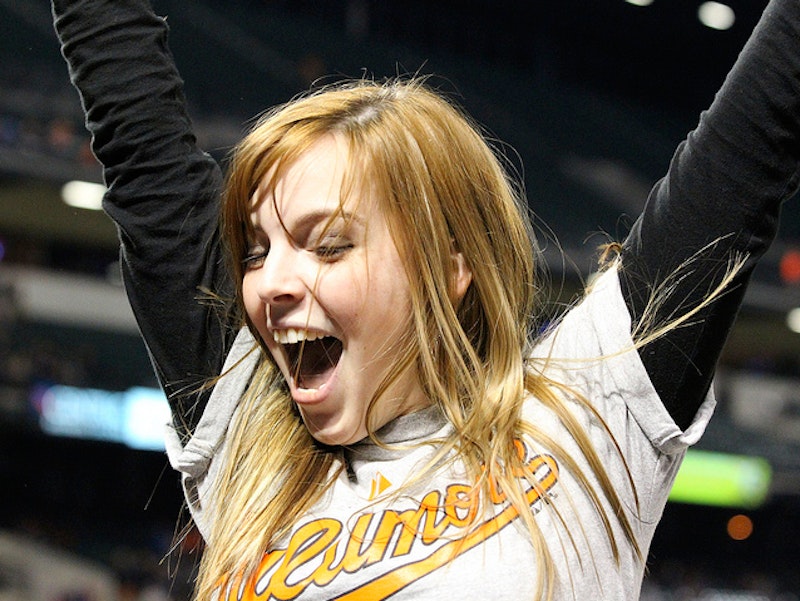 I attended last Friday night's O's/Nats game at Camden Yards after winning four tickets in an Opening Day raffle. Three friends, and fellow disgruntled Orioles fans, came along with me to the ballpark. Our general feelings for our beloved Birds range from apathy to disgust. Most of the guys that came with me hadn't been to a game in two or three years. We figured the O's had a pretty decent chance of upending our supposed rivals from DC. We were in for a long evening.

Things got off to a bad start for the Orioles as starter Jake Arrieta took a ground ball off his lower leg in the first inning. Arrieta struggled with his command and stood at 53 pitches after just two innings. On the heels of Wednesday's 15-inning loss to the Yankees and Thursday's 13-2 debacle, the overtaxed and ineffective bullpen was nothing more than batting practice for the offensively challenged Nats. As lifelong O's fans we'd seen it all before. While yielding 17 runs and six homers to the freakin' Nats may have been a new franchise low, it certainly wasn't shocking.

What was shocking was the number of young Orioles fans in attendance at the Yard. Friday home games are Student nights with $6 upper reserved tickets for anyone with a legitimate ID. I assumed that the Student Night promotion generally attracted a crowd that wanted a few hours of cheap entertainment after getting pickled at Pickles and before heading to Fells Point to get shit-faced. While that was clearly the agenda for many of the young adults in attendance, most of them seemed to be genuinely interested in the game.

The Orioles struggles are well documented. They haven't finished above .500 since 1997. The average college junior was just seven years old in 1997. Despite this fact there were thousands of orange and black clad students filling Camden Yards on Friday night. Perhaps the most surprising sight was a girl who couldn't have been more than 20, who sported an Oriole bird tattooed on her lower back. This gave new meaning to the term "tramp stamp." Who the hell gets a tattoo of an Oriole bird? I've been an O's fan my entire life and there are days when I'm almost embarrassed to sport my cartoon bird vintage 1983 O's cap. A tattoo? I can only assume that she either lost a bet or she's Rick Dempsey's daughter.

The Orioles have essentially lost a generation of fans by struggling to the point that it sometimes looks like they're not even trying to compete. Amidst wasted draft picks, failed free agent signings and multiple rebuilding efforts thousands of young baseball fans in Baltimore have turned their attention to other teams, or sports. It's one of the reasons that Red Sox and Yankees fans come scurrying out like cockroaches, with personalities to match, whenever those teams come to town. Sure, the Yanks and Sox fans travel well, bandwagons will do that, but many of those fans are locals.

Friday night's turnout made me feel a bit of hope. Some students showing up to the park wearing Wieters and Jones jerseys won't make the O's a competitive team but it does show that there are still people in Baltimore who care about baseball. These kids haven't seen the Orioles win so much as a chicken dinner in their lifetimes but they proudly donned the orange and black on a Friday night against a contrived "rival." Winning cures all ills (and the Birds did take the next two weekend games from the Nats). If the Orioles ever field a consistently competitive team there will be a new generation of fans here to cheer them on.