The Baltimore Grand Prix and the headaches its caused could come back to bite Mayor Stephanie-Rawlings Blake in the next election. 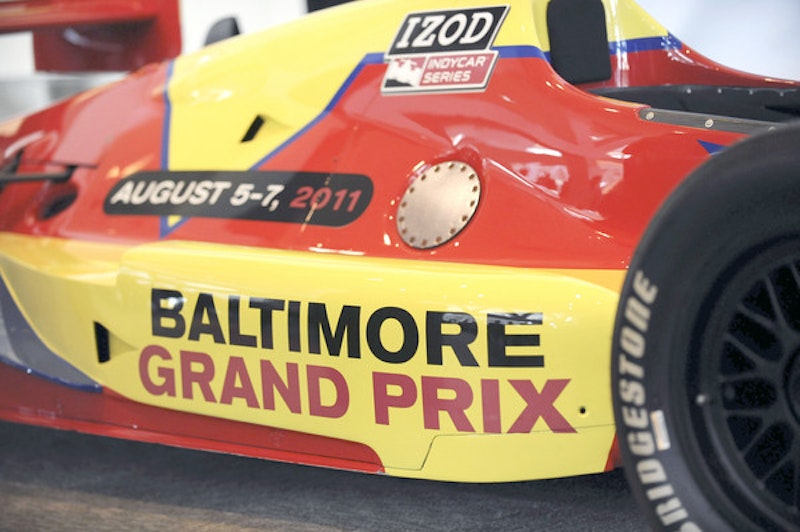 There are a couple of sticks of dynamite in the Baltimore Grand Prix for Mayor Stephanie-Rawlings Blake, coming as it does on the Labor Day weekend before her first election by the city’s voters. First, the redneck race had better pay off or she’ll look pretty stupid. And second, the level of frustration by voters over traffic congestion, noise, pollution and just plain inconvenience—not to mention the possibility of a major life-threatening tragedy—could come back to bite her at the polls.

Imagine, asking patients to postpone elective surgery because the University of Maryland hospital complex will be virtually inaccessible over the weekend of the race. Think that’s bad? They’re going to shut down the entire Greene St. university campus for three days, including clinics and classes, because of the noise generated by the Indy-class open-wheeled coffins blazing by their doors. Medical staffers, however, will book into nearby hotels so they can hot-foot it to work without the need for cars. But the cruelest casualty of all, in Baltimore, at least, is the Sunday Farmer’s Market which will shut down so the lots can be used for parking, according to published reports.

The worst possible nightmare for Rawlings-Blake and the City of Baltimore would be a wheel flying off a car and into a clump of spectators, or a car careening out of control and off the roadway into the stands or a fiery explosion that spreads highly flammable fuel or a sheet of flames onto an audience of dazed and trapped watchers. It happens every Sunday on television which creates a sense of immunity because it’s happening for real somewhere else. And all anyone has to do to make it go away is turn off the wide-screen set. That’s not the case when the action is in your own front yard or in a loft apartment above the streets hosting the races. As an historical reference point, race-car speedways have been rejected numerous times over the years in several proposed Maryland locations because of their noise and danger.

All this, for what? Any jughead who gets his jollies watching cars travel at break-neck speeds can stand on the 41st St. Bridge overlooking the Jones Falls Expressway in both directions and watch after-hours drag-racing. Better still, go there after midnight when techno-age Suzuki and Honda motorcycles are revved up to maximum speeds in full killer expressway end-to-end races.

Get used to it. Rawlings-Blake has committed the city to this lethal silliness every year for five years. The poop sheet that was issued claims the races will create 200 jobs and generate $250 million in revenue from the 100,000 visitors that it projects will come to Baltimore to view the 190 mph motorized mayhem. That’s putting a happy face on what essentially is a crap shoot. Nobody really knows whether it’ll draw or not. Tickets range from a high of $825 for the weekend for premier viewing down to $425 for the hoi polloi, with daily tickets also available in what amounts to bleachers. As a bonus, viewers get to watch Colin Powell, former general and secretary of state and long-time gearhead and auto-race nut, officially launch the Baltimore Grand Prix. And oh, there’ll be blousy flag girls, too.

To accommodate the race, the city had committed $7.75 million for road construction along the 2.1 mile Inner Harbor open-wheel race course, mainly along Pratt St. And just last week, the Board of Estimates added another $98,800 to the tab for improved infrastructure, whatever that word disguises. This, while the rest of the city’s streets resemble a moonscape of potholes and corrugated roadways. And it is the inconvenience of the road construction that has had city residents, especially commuters, turning the air blue with dark curses and accusatory comments. Pratt St., the city’s main west-to-east boulevard along the waterfront has been undergoing an upgrade for nearly a year and has been virtually impassable. And now Conway St. is closed in both directions as anyone has discovered who has tried to turn off Lombard St. onto Light St. toward Federal Hill.

And for Labor Day weekend, Sept. 2-4, probably one of the busiest Inner Harbor weekends of the year and summer’s final frolic, the entire length of Pratt St., from Paca St. to Little Italy, will be sealed off for the races and inaccessible to foot traffic except, perhaps, to ticket holders for the races. Federal Hill will be virtually cut off from the rest of the city.

The three-day 2011 IZOD IndyCar races are being billed as a “festival of speed.” But to anyone who lives and works hereabouts Baltimore has been precisely the opposite, with petty-paced traffic geared down to a virtual standstill. With the mayoral primary election scheduled for eight days later, on Sept. 13, voters will have just enough time to give Rawlings-Blake a pat on the back for job well done or a thumbs down at the polls if the enterprise on wheels backfires because of one mishap or another. Her Democratic challengers include: Otis Rolley, former city planning director; Jody Landers, former City Council member and vice president of the Greater Baltimore Board of Realtors; Sen. Catherine Pugh; Council member Carl Stokes; and Court Clerk Frank Conaway.

Not that Rawlings-Blake is, at this point, in any grave danger of defeat. She has a million dollars in the bank, the support of Gov. Martin O’Malley’s political organization (his brother, Peter, is Rawlings-Blake’s new chief of staff) and the collective of black women is Baltimore’s new majority voting bloc. But a financial failure or a lack of spectators for Baltimore’s first-time Grand Prix could reflect poorly on her judgment as a fiscal leader of the city. And any great calamity on the race course itself could leave voters thoroughly disgusted with the latest effort to expand Baltimore’s tourist business that could bring tragedy and grief with it.

Carving a speed track out of the heart of the city, any city, is risky business. It begs the question: Are we so hard up that we’ll try anything to turn a quick buck? That is the nub of the new experiment, and Rawlings-Blake has put her reputation—if not her career—on the block in a questionable effort to put Baltimore on the map for one more dubious thing and to try and balance the budget on racecar fumes for another.

So let it be said, in the kindest of terms, that the Grand Prix weekend is the handiwork of a mayor and other Baltimore leaders—elected and unelected—who are, out of sheer frustration, desperate to try anything at all to boost the city and its economy out of stagnation and into something that resembles positive movement. Rawlings-Blake had better hope, for her sake and the city’s, that it works without any serious and lasting damage.