We're So Alone, Together

On The Copycat Theatre's Rooms Play, part of the 8th Annual Transmodern Festival. 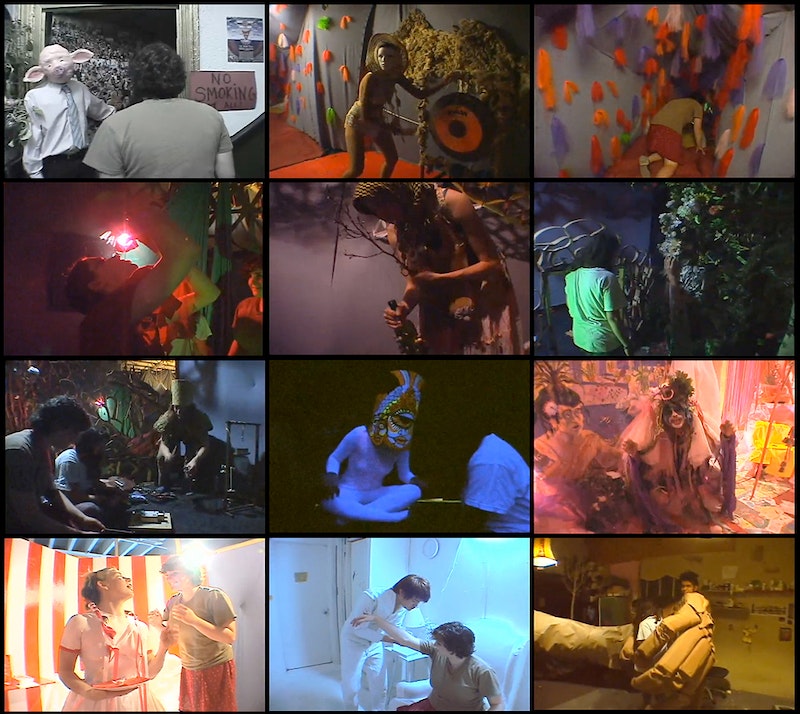 I’ve just crawled under a television, with a friend and two strangers, in the house of a married couple clearly long out of love. The room and their clothing are colored bright red and yellow, McDonald’s style, and rice covers the floor. The smell is a pungent mix of B.O. and cat piss. They sit us down and explain why they are there, what is wrong with their lives—“There’s blood in my shit,” says the husband. His wife makes small talk with my friend while he confronts our male companion. “Why isn’t the floor swept?” barks the husband, his face covered in exaggerated lines and wrinkles. “Sorry, dad,” says the exasperated participant. The husband snaps back—“Don’t call me dad, weirdo.” Five minutes later, we’re crawling through their cartoonish cloth toilet, onto the next environment.

This is Rooms Play, an interactive theater experience created and organized by Baltimore’s Copycat Theater that just concluded its third or fourth incarnation. Conceived as an immersive commentary on immigration and alienation, Rooms Play most often feels like an endurance test, as you move from “room” to room (really a complex labyrinth of different environments separated mostly by curtains and some thin walls—you often hear the commotion of other room loops, wherever you are) on your hands, feet, and knees, not sure what kind of weirdness the next place will bring. People will touch you and do things to you, and you’re compelled to oblige.

The immigration theme, obtuse at first, becomes clear once the play has some time to sink in: from the moment Peter Pan starts singing about what you ate for lunch that day, the audience is forced to move from one disorienting environment after the other, crawling through dark tunnels, talking to supposedly wise guides in indecipherable gibberish, and quickly losing their identity. You’re asked to wear masks, adopt new names and the customs of these strange and enthusiastic people. By the time you reach the last level, a mock beach filled with sand, pails, and shovels, you feel cleansed, almost bleached: Rooms Play is 90 minutes of disorientation and discomfort, but it’s also equally mesmerizing. Each room is intricately designed and decorated, and one of the best parts of the experience was just looking around and exploring the space, each filled with details far too numerous to catch on a single run-through. The audience perhaps feels like how an immigrant might upon entering our country—filled with excitement and curiosity but without any sense of familiarity or stability.

This theme is heavy-handed at times. One of the play’s final rooms features a man in a spider costume who implores you to analyze two images side by side: René Magritte’s famous “This is not a pipe” illustration and one of Speedy Gonzales with the caption “NOT MEXICAN.” But the play’s intended political commentary notwithstanding, it is an enormously powerful and challenging identity exercise. Just the very act of directly interacting with the characters and moving through their world has such a brilliant effect on the participant—your emotion, your physical state, everything is heightened and made totally visceral and real. You don’t merely watch a brothel scene: you have a semi-naked woman on your lap begging you to play 7 Minutes in Heaven with her behind the curtain. You don’t observe angels dancing; you dance with them, and chant in unison “Homeland Safe, Homeland Self!” Rooms Play is a remarkable theatrical experience because things actually happen to you and you have to cope and respond in real time.

One more thing: the smells of Rooms Play deserve top billing. Every type of B.O., halitosis, and piss you can imagine, but with slight variations from room to room (the nap area, particularly musky—the living room, kitty litter). This is not meant as criticism—although the H&H always smells like that, it was another layer of strangeness that added to the bizarro nature of the whole thing. Going through Rooms Play felt alienating, but ultimately it was a great, fun time and absolutely never boring