The chronicle of a courtship that began in Cross Keys and ended in the Hollywood Hills. 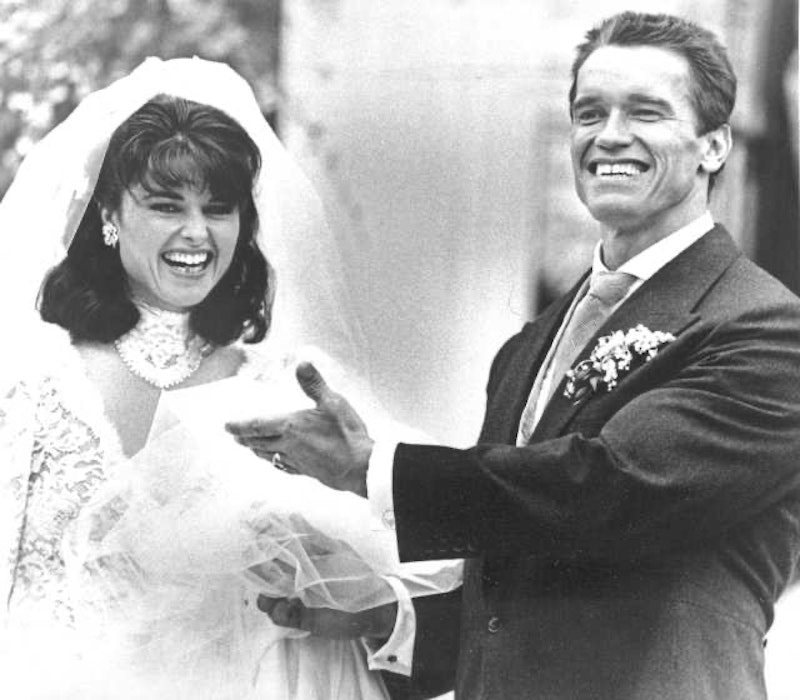 The superstar marriage that crashed last week in the haute Zip Code of Brentwood above Los Angeles had its quiet beginnings in Northwest Baltimore, where Arnold Schwarzenegger used to come courting Maria Shriver in the leafy uptown Village of Cross Keys.

Shriver lived there in a modest one bedroom ground-level apartment at the north end of the Village, in the 200 block of Cross Keys Rd., when she was beginning her television career as a producer of an airy entertainment show called “Evening” on WJZ-TV (Channel 13).

Another rising star also lived in the Village of Cross Keys at about the same time. Her name was Oprah Winfrey, also of Channel 13, and she lived first in a rented unit at the Village’s south end, which she later purchased when James W. Rouse converted the rental units to condominiums. Oprah learned to swim at the Olympic-scale south pool, where she splashed among the toddlers (including my own daughter, who helped Oprah learn her strokes) who were also practicing how to stay afloat. And one of Oprah’s favorite foods on the planet’s menu was the legendary fried chicken from the Village Deli which, until the Deli closed a number of years ago, was regularly air-mailed to her in Chicago - even after she achieved fame and great wealth. Winfrey and Shriver no doubt crossed paths many times in the studios and editing booths of WJZ.

Shriver, twice the girth then as she is now, lived anonymously and privately during her brief time at the Village. She sunbathed on the fenced-in patio adjoining her apartment, while few in the Village knew there was a Kennedy living among them. Schwarzenegger, too, had yet to achieve stardom. Back then, around the late 1970s, he was a well-known body-builder called “the Austrian oak,” after his natal country, and named “Mr. Universe” and also “Mr. Olympia” seven times, who flexed his well-oiled muscles on magazine covers long before he advanced to movie screens and the choreographed mayhem that is his hallmark. Schwarzenegger’s breakout film, “Conan the Barbarian,” was released in 1982.

Schwarzenegger came calling on weekends, and he and Shriver would stroll, holding hands, unbothered and largely unnoticed, around the lushly landscaped Village pathways, she often in pants and blouse and he, tree-truck neck and pile-driver legs, in shorts and a muscle shirt that strained to hold back the bulges and ripples. One recent report stated that the two were introduced in 1977 by Tom Brokaw, the NBC anchor, at a charity tennis match at her parents’ home in Potomac. Except for the weekend, strolls, the couple was not much of a visible presence in the 73-acre Village of Cross Keys complex, the site of the former Baltimore Country Club golf course off Falls Rd. – no swimming pool sightings, no lunches at the Deli, no tennis court time.

Cross Keys, despite its theme park atmosphere, is a discreet kind of place where it’s possible to live quietly, undetected and undisturbed. Over the years, it has been home to the great and the near-great – Dr. Milton Eisenhower, president of the Johns Hopkins University; Gov. Harry R. Hughes; John Dos Passos, the great American author; John Marshal Butler, former Republican U.S. senator from Maryland; State Treasurer John Leutkemeyer; the poet Ogden Nash, to name a few. The current resident author is Anne Tyler (Accidental Tourist.)

But eventually Shriver disappeared from the Village of Cross Keys as her career accelerated and she landed at CBS and later at NBC where she became a star in her own right and winner of several Emmys, a Peabody Award and author of six books. Shriver and Schwarzenegger were married at Hyannis Port, MA, the fabled Kennedy compound, in 1986, and their four children were born between 1989 and 1997. The youngest son, 13, arrived almost concurrently with the love-child Schwarzenegger admits he fathered by one of the household staff and brought an end, at least temporarily, to his marriage to Shriver. They announced their separation on May 9, and she has hired a top divorce lawyer. Schwarzenegger has put his movie career revival on hold while he and Shriver negotiate their futures, whatever they might be. Marriages that are made in heaven often do not survive here on earth.

Schwarzenegger announced his candidacy for governor of California in 2003 and Shriver had to rescue him from his past peccadilloes several times. During that campaign year, Shriver and Winfrey, the two Baltimore TV rising stars, reunited on the “Oprah Winfrey Show” along with Schwarzenegger. During the show, Shriver had to put her hand over Schwarzenegger’s mouth when he began to boast of his youthful exploits with women and drugs. And toward the end of the campaign, Shriver delivered an eloquent speech in defense of her husband when reports of his groping of women threatened to wreck his candidacy. He went on to win the governorship of California and Shriver became first lady, appearing cheerily side-by-side in California tourism commercials. Shriver gave up her established career as a television journalist to enter the family business of politics. It was an odd-couple arrangement, she a Democrat and he a Republican, that often had them on opposite margins of issues although, to the chagrin of conservatives, he often swung around to her point of view on social matters.

The Shrivers, of course, are a legendary Maryland family dating back as early as 1776 when an ancestor, David Shriver (originally Schreiber) signed the Maryland Constitution and Bill of Rights. The Shriver ancestral home in Carroll County is an historical landmark. History met destiny when R. Sargent Shriver married Eunice Kennedy, sister of President John F. Kennedy. Sargent Shriver was named by the president to head the Peace Corps and was later ambassador to France. In 1970, he was considered a serious candidate for governor of Maryland but decided not to challenge Gov. Marvin Mandel. He ran for vice president in 1972 on the Democratic ticket headed by George McGovern. Maria Shriver is a cousin of Maryland’s former lieutenant governor, Kathleen Kennedy Townsend, whose father was Robert F. Kennedy.

It is a fitting reunion, and an unfortunate ending, that Shriver will be a guest on the final Oprah show as Oprah says goodbye to the daytime slobber-fest and confessional that she has hosted for 25 years. And it is altogether appropriate that the romance that began in Baltimore, at the Village of Cross Keys, should end in a mansion in the Hollywood hills, as so many marriages do, just as in the movies.