Willard Hackerman's plans for a $900 million convention center make sense for Baltimore and its residents. 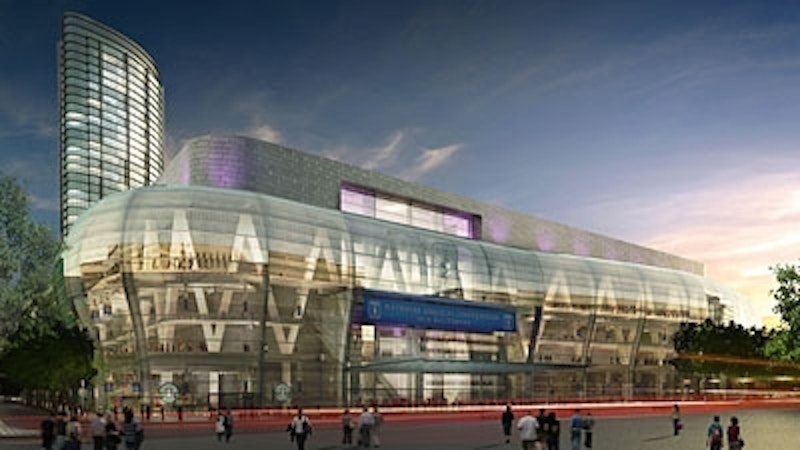 Baltimore is once again about to undergo one of its periodic reinventions, this time without shifting the center of gravity but building on it partly at private expense. Willard Hackerman, 92, financier, entrepreneur and construction baron has offered to spend $500 million of his own (and presumably others’) money to expand Baltimore’s convention accommodations if the city or state, or a combination of both, can scrape together another $400 million to complete the expansive public/private project.

Hackerman’s self-financed plan proposes to build a new convention hotel (yes, another one) connected to a spiffy new 18,500-seat arena and inter-locked with yet another addition to the Convention Center. Add to the mix a bridge that would arc over the whole pile of architectural building blocks to provide visitors with soaring downtown vistas and unimpeded foot transport. If you’re getting a sense of déjà vu all over again you’re entitled to because we’ve been down this bread crumb trail before. In fact, Hackerman had offered to build a convention hotel on the site of the existing Albert Speer-like convention hotel that then-Mayor Martin O’Malley, against all advice and civic instinct, insisted that the city build and finance. Hackerman owns (or owned) the Sheraton Hotel in the Inner Harbor, nearby the site of the proposed new construction. As a bonus, Hackerman’s proposed arena would be a self-supporting facility without the need for a sports franchise, home-grown or poached, to help finance the enterprise and large enough to accommodate, say, a Lady Gaga performance.

So what’s the catch? Unless it’s very well hidden, there doesn’t seem to be one. It appears to be a good deal for everyone. Sure, Hackerman’s going to make money, and maybe even get a huge tax break and probably construction management fees. That’s why he’s in the business he’s in. It’s not exactly his lovesong to Baltimore. He gets a new hotel. He gets a new arena. And he gets the massive construction job that’ll benefit his company as well as put a lot of trades union members to work while he profits from the project. The Convention Center add-on would be publicly bid, and don’t count Hackerman out on that end either, just to keep symmetry among the bricks and mortar. It just so happens that the bonds that financed the last state-sponsored addition to the Convention Center will be paid off in about two years which could ease the way for another bond sale to finance the new space if the state agrees to be the public partner in the deal. Gov. Martin O’Malley (D) and Mayor Stephanie Rawlings-Blake have asked the Maryland Stadium Authority to underwrite a feasibility study, projected to cost $150,000, due by the end of the year. Any political hobbyist can predict its recommendations.

Convention facilities are the sports complexes of the new decade. Just as municipalities were pressured in the 1990s to build stadiums and attract teams and fans, cities today are being squeezed to compete for lucrative convention business by offering elaborate meeting facilities. Baltimore has tried new renditions of itself several times but has always fallen short of being a major convention attraction for pot-bellied Rotarians from Iowa and flush-faced Kiwanians from Kansas. Baltimore has always been stuck somewhere among the mid-size convention towns with its inner-self struggling to get ahead of the pack. But Hackerman’s proposal, as grand as it sounds, will not advance Baltimore to the front ranks of convention cities. It’ll still be a mid-sized city competing for mid-sized conventions with a population burst of about 5000 visitors per meeting.

Baltimore has never been able to compete with the likes of, say, San Francisco or Boston or New York for major conventions such as national political conventions or the annual AMA or American Bar Association meetings. San Francisco offers about 30,000 hotel rooms and Boston about the same number. Both have massive convention centers. Baltimore has about 7000 hotel rooms available. Put another way, there are 40 hotels within the Greater Baltimore Area and 240 hotels in and around Boston. San Francisco advertises 187 hotels.  So expansion is the watchword of 2011 with meeting space as the centerpiece.

For example, the Chicago Merchandise Mart, the world’s largest meeting and display facility of its kind, has multiplied itself many times over and is now the size of a couple dozen football fields. The District of Columbia’s new convention center is falling short because National Harbor, on the banks of the Potomac River in Prince George’s County, has incorporated more than 200,000 square feet of meeting space adjoining its hotels and is outdrawing the convention hall in the nation’s capital. It is, nonetheless, a crap shoot to expand Baltimore’s convention accommodations. It is impossible to replicate San Francisco’s natural beauty and cultural appeal, to duplicate the Sunbelt’s climate or to mimic Boston’s compact walk-ability in a sprawling town such as Baltimore that’s designed on a massive grid.

But the advantage of Baltimore as a convention site is also a disadvantage to the city at-large. Unlike many other cities, Baltimore’s hospitality facilities exist in one long contiguous line along Pratt St., beginning at the ball yards and extending eastward into Little Italy, Harbor East and Fells Point. Along the waterfront route there’s the Convention Center, Harborplace, the National Aquarium and Power Plant, all accessible on an elongated strip of a linear package, kind of like an urban boardwalk. But on the downside, while most visitors and conventioneers cling to waterfront center of attraction, the rest of the city and its cultural and entertainment attractions, i.e., the Walters Art Gallery and the Baltimore Museum of Art, remain unexplored by outsiders because of their distance from the core convention area. The Baltimore Connecter, as convenient as it is, just doesn’t go far enough in any direction. Truth be told, there are areas of the city that outsiders shouldn’t see.

A major drawback that Baltimore has suffered since the early 1970s is the notion that it is not a destination city but is a pit stop or a lunch break somewhere between Philadelphia and Washington. To some extent that is still true despite every effort to lure tourists and conventioneers with constantly expanding attractions. In addition to Hackerman’s convention complex proposal, there are other ideas on somebody’s desk to refresh the aging Inner Harbor into kind of a thermonuclear theme park. They include light shows, Baltimore’s rendition of the Eiffel tower, rides and other municipal Tinker Toys, kind a Hershey Park or King’s Dominion by the Bay, tacky but alluring. If only the ministers of influence had had the cojones to include a full-blown casino in the mix.

But the critical point to the business side of Baltimore is the expansion of its convention complex. It immediately elevates the size of the meetings Baltimore can accommodate as well as advances the importance of the city as serious bidder in the lucrative convention competitions. What’s more, it is, in a modest way, Baltimore’s own stimulus program for the construction industry even if Hackerman does personally benefit. He’s built, through his company, Whiting Turner Construction, most of the major structures in the area anyway. And he delivers on schedule and within bid.

The proposal comes at a time when Baltimore, what H. L. Mencken described as “the ruins of a once great medieval city,” could use a physical as well as a psychological lift during a time of economic stress as well as a point when the smudges of age are beginning to show on the fading glitz of two or three decades ago. And it’s not often that opportunities such as the proposed public/private venture of a new convention complex meet with near universal acceptance. On the surface, unless unforeseen impediments arise, it seems like an offer the city can’t refuse.