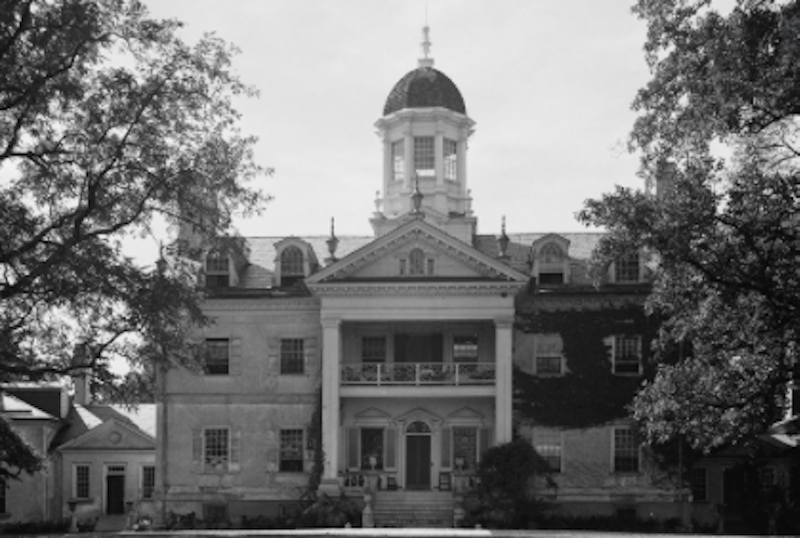 Discovering how easy it was to make a lot of money by pocketing rare documents, and selling them to book dealers inspired Eric. After quickly frittering the cash from his first episode away on penny candies, Mad magazines, records, cowboy shirts, milkshakes, and cheeseburger platters at the Towson Read’s drugstore lunch counter, he decided it was time to get some more money.

He returned to the Pratt Library’s rare books room, and once again was admitted without supervision. Again, he left and brought a letter to John Gach. This time, Gach was suspicious, went into his back office and called Charles Hamilton, an expert on forgeries, in New York City. Hamilton checked his resources and found that particular letter from Poe was an important document owned for many years by Baltimore’s Enoch Pratt Free Library, and was supposedly still there.

The jig was up. Gach called the police department who detained Eric as a juvenile. He was remanded to the custody of his parents in Towson. As a juvenile, he couldn’t be charged with crimes. If he’d been an adult, he could’ve been charged with grand larceny and other serious offenses that could lead to many years in jail.

A magistrate sentenced him to spend 14 days at the Baltimore City Juvenile Detention Center. While there, he washed dishes in the kitchen. It was hoped that he learned that crime didn’t pay. What do you do with a white 12-year-old felon from the suburbs? Make him wash dishes.

Since Eric was an avid reader and knew more about Civil War history than his teachers, they dismissed the theft as a naïve mistake by a promising, but overzealous youth. After all, most kids in the detention center had committed violent acts of assault, arson and vandalism, or stealing guns and cars. He’d taken a few old papers, so his mother welcomed him home.

But the consequences just rolled off his back. In fact, the episode opened a new door to him. He was banned from the Pratt Library—for life, but there were hundreds of antique stores, libraries, and rare bookshops near and around Baltimore, from York PA to Alexandria, VA. They were fruitful hunting grounds for an obsessive/compulsive young boy.

Meeting me, and my car, expanded his reach to these shops and libraries. I was fascinated by his strong interest in antiques and collectibles, and happily followed his leads. I came to realize when we left a store or library, and he emptied his deep coat pockets, that beyond the trinket he had bought, he probably had another five-six items.

Though interesting, to me they were just old junk. At first, I wrote off his shoplifting as part of his hippie philosophy that everything belonged to everyone. He’d give me a daguerreotype, or civil war bullet as a present, which I’d put into a drawer and forgot. But I didn’t like it. As these outings increased, I’d resist going into the stores, and scold him. Stuff we’d find in the old ruins, like an old fork or hand tool, I said was okay to keep, but I wouldn’t go on antique shop raids anymore. Seeing that his ride might disappear, he promised to stop stealing. Which probably meant he just stopped emptying his pockets and showing me his booty.

Sometimes, we’d take longer drives to older, rural historic towns on the road to Gettysburg. The small city of York, PA, was like a museum of architecture. It had blocks of well-preserved stone, brick and log structures, and none of the mid-20th century dreck that Towson had replaced its older structures with.

We went to cemeteries to read poetic 18th-and 19th-century gravestones. “Hail to ye who pass me by, as you are now so once was I. As I am now, so you shall be. So prepare thyself to follow me.” More than once, we’d creep into walled cemeteries late at night.

Our favorite was at the Hampton Mansion in Towson. The goal was to see something supernatural—something that moved in the shadows, something vaporous, or something screeching, fluttering or breathing sounds, scaring ourselves with “Did you see that?”

Built in 1745, it was a large, elegant Georgian estate, which over its 200 years was reputed to have ghosts, including slaves who’d worked the 10,000-acre plantation and were buried in scattered, unmarked graves. We imagined that the suburban homes that had recently sprung up on the plantation land had many backyards with slave graves, and that one day they’d all arise to punish the white people for their sins.

To intensify the experience, we’d share a bowl or two of weed, smoked in Eric’s antique corncob pipe. While other kids our age went to basketball games, school dances, or played pool in friends’ basements, we were out seeking infinity.

We liked the oddball New Era bookshop, owned by an avowed Communist, who carried books and magazines from Russia, Cuba and China, to look at all the commie books magazines and newspapers. We’d buy gaudy Maoist proletarian posters of bright red tractors and bright-eyed laborers shipped in from The People’s Republic of China. We’d walk down the street to peruse foreign newspapers from Abe Sherman’s bookstore and then get dinner at Mee Jun Low’s Chinese Restaurant, which was mostly popular with Baltimore’s tiny beatnik population and classical music students from the Peabody Conservatory.

Mee’s tea, it was rumored, was laced with opium. It was cheap, cozy and funky. The very lively waitress, Irene, claimed to be a Cherokee from Oklahoma, and called out the food orders to the cooks in the tiny, steam-filled kitchen in some odd language—dah yo hey yah dee— that sounded Chinese, but probably wasn’t.

I especially liked winter nights there. You’d walk up the skinny row of steps of the 18th-century townhouse, into the dim, usually packed dining room. After dinner, back to the street and if snow was swirling, Mee’s red neon sign lit the deserted urban streetscape like an Edward Hopper painting. We’d jump back in the car for the 15-minute drive up abandoned 19thcentury streets to Towson. In summer, we’d cruise down Baltimore’s infamous “Block” to gawk at the packed sidewalks, the neon-gaudy strip joints, dirty bookstores, peep shows, and b-girl bars, where sailors from the docks could find easy female companionship for a $20 bottle of champagne (that had been refilled with ginger ale).

You had to be 21 to get in, but we happily feasted our eyes on the bright, animated signs, the beefy doormen perched on stools by the front, trying to lure soldiers and sailors and conventioneers inside, marveling that such intriguing and illicit places could exist in our overlooked and buttoned up little city. We lived in a fantasy world of Baltimore’s once elegant past. It was a place of decaying Victorian grandeur and excessive Edwardian fancy. There were still cobblestone streets and decaying docks with dim streetlights blurred by the fog, so that you could imagine we were cruising the jazz clubs of London or Hamburg’s docks in the 1920s.

We imagined opium dens, and mugged, drunken poets. We trespassed late into the night through abandoned parks, plazas, and glistening streets, and along looming blocks of four-story brick row houses exposing a world from a very different time. We were spying into the places our once city-bound parents and grandparents had lived and played during the Depression and World War II. It belonged to them, not us. We were tourists.