My Band Wasn’t Great, But We Had the Gear 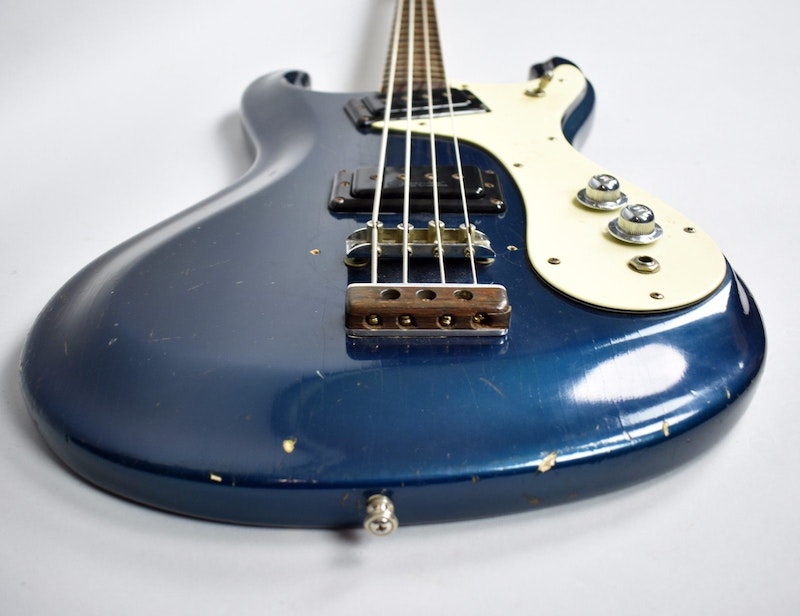 After my first guitar lesson, the instructor took me to the sales room, to see the shiny new electric rock guitars—Gibsons, Epiphones, and Fenders. My father had bought me a cheapo nylon string folk guitar, but after my first look at the stunning electrics, I realized my unknown dream.

The guitars had loud, sparkling colors, cherry reds, greens, all slick and shiny in abstract shapes, and decorated with mysterious silver and gold hardware. They sported mysterious switches, knobs, buttons and levers. They were so space age. This was The Jetsons. It was innovative, rebellious, and I had to have one. The prices for these professional instruments were 10 times what my no-name guitar cost. Since I just got the new folk guitar, my parents insisted I wait to see if I really liked it enough to invest in a wallet-busting electric guitar. But I was now totally sold on rock ‘n’ roll, mainly because of the guitars, I suppose.

My drummer friend Pat commiserated, and told me about a used/cheap brands music instrument store in downtown Baltimore—Ted’s Music. We took a bus there, and poked around the several large rooms; him seeking used drums, and me a used electric guitar. Even most of those we couldn’t afford, but we soaked up the stuffy atmosphere of weird instruments from around the world and Japanese knock-offs of America’s brand names. All we could afford were harmonicas, guitar picks, and drum sticks. However, Ted, “the musician’s friend,” promised to find us an affordable guitar, if we returned with our parents—and their money.

I stuck with my folk guitar lessons, and Eddie Stringer, the studio owner, let me try an electric guitar once in a while. Eventually my father took me to a downtown pawn shop, where they had a few electric guitars at prices even lower than Ted’s.He agreed to buy me a big, fat low-end Harmony hollow body of 1940s design. The amp was a tiny transistor 3 watt amp that hissed like a snake, and was made by “Rheem/Caliphone,”which mainly made air conditioners. The sexy Fender solid body, and the big Beatles amp would have to wait.

Pat somehow scraped together enough cash, and chiseled Ted down on a beat-up bass drum and crash symbol. With my electric guitar kit, we could finally be a band. I had a trained voice from my years as a choirboy, and Pat was a willing and able singer. A neighbor boy down the street heard us practicing in my basement, and got his parents to buy him a Harmony (naturally) bass guitar and a beat-up Sears Silvertone bass amp. Suddenly we were a three-piece band. We practiced four-fivetimes a week, and the sound was awful. But my parents admired our determination, if not the type or quality of the music. Another person popped up, Pat Doherty, who wanted to be Mick Jagger, and was brave enough to try it. Now we had a singer. Charlie Stagmer appeared one day, with his LeBan electric guitar. He was a good lead guitar player, could play a harmonica and sing pretty well too. We were ready for the big time.

Our band’s equipment quickly snowballed in quantity, loudness, and cost. As long as we kept practicing, our parents thought it was a good idea, to keep us out of trouble. We told them that there were many paying opportunities to play in Baltimore, but we needed more pro equipment which meant better, sexier-looking name brand guitars, amps, and a PA system for vocals. By the time I was 15, I had a Fender Telecaster, the bass player a Hofner Beatle Bass, the drummer a full set of Ludwigs, and we were decent enough players to attract a small following, and invites to play paying gigs a few times a month around Baltimore. We were never very good, but we put on a decentshow, because we made it fun. We had band cards, and a reputation for playing music that was different from the dozens of top-40 and soul bands that dominated the scene. We played mostly blues.

One of our first gigs was at a Johns Hopkins University frat house in a big brick mansion, just off campus. We 15-year-olds didn’t know what to expect, but were tickled when they offered us beer.  As the evening wore on, we found it a little strange that there were no girls, and the boys danced enthusiastically with each other—we had no idea why. They lustily cheered our lively performance, and we were proud of ourselves. When my father picked me up at 11 p.m., I described the evening (not mentioning the beer). His eyes rolled in shock, and said we probably shouldn’t play there anymore (even though we were invited back). He never said another word about it, but many years later, I discovered he’d been good friends with Harry L. Gladding, a wealthy Baltimore car dealer, bon vivant and philanthropist. Gladding was a well-known gay, and a thorn in the side of Baltimore’s anti-homosexual pressure groups. And I always thought dad was so square.