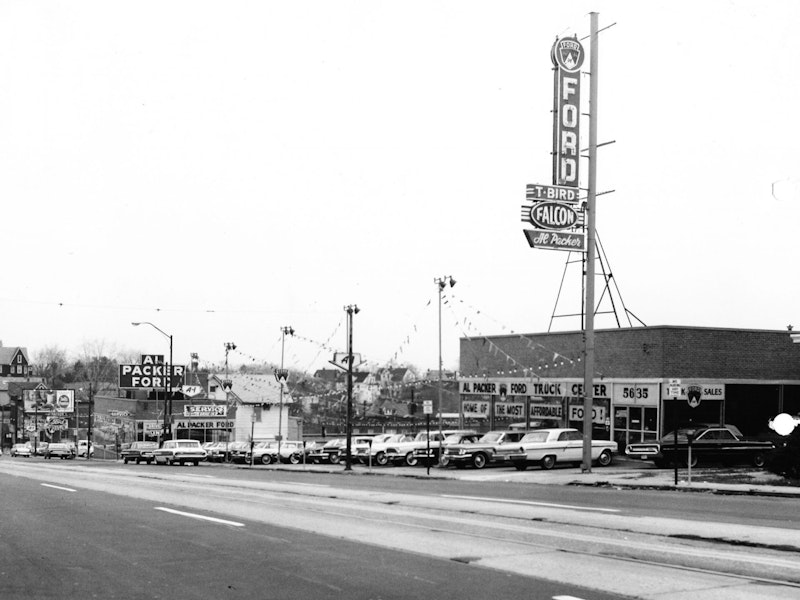 In my early garage band years in Rodgers Forge, 1964-mid ‘67, we were all too young to drive, and my father willingly became the designated chauffeur. He loved to drive, and taking me somewhere was never a problem. When I had a Baltimore News-American paper route, on snowy or rainy days, he’d get up with me at five in the morning, helped load the papers into the car, and then drove through the entire route, listening to the radio and smoking cigarettes.

My route was a few blocks on the border of Towson and Rodgers Forge, mainly Stevenson La., then my street, Yorktowne Dr., and then a cut through the open field behind my house to LaPaix La. Divine (aka Harris Glenn Milstead), John Water’s famous/notorious cohort grew up there. Divine’s parents had a little nursery school in their home on LaPaix, and I delivered papers there. At the end of LaPaix was an old rambling mansion straight out of a gothic horror novel. F. Scott Fitzgerald and his wife Zelda rented it in the early-1930s, while she was treated for schizophrenia at the Sheppard Pratt mental hospital, next door.

Zelda set the mansion on fire one night—no one knows if it was accidental or intentional. She sat in a chair on the front lawn watching all the action as the fire trucks roared up, and helpful neighbors rushed in the house to save some of the thousands of Fitzgerald’s books.  Because the house was uninhabitable, F. Scott and Zelda moved to downtown Baltimore, near a different mental institution.

My father chauffeured me and as many of the band and our equipment that fit into his Buick Le Sabre to gigs at teen centers, fire halls, or little clubs around town. I didn’t really want him around, because he was the authority figure we were trying to avoid in our quest to be rebel rock ‘n’ roll stars. In reality, I wouldn’t have made it to many great events without him, for which I’m eternally grateful.

In high school, after I turned 16 and got my driver’s license, my father bought me a cheapo Corvair his company had repo’d (no AC, no auto anything). I rode the bus to and from school, which was a pain, because in soccer season, my father had to pick me up out in the country at five every day after practice. After soccer season, to avoid intra-mural basketball, I volunteered for a VISTA program where white prep schoolers tutored at a mostly black inner-city elementary school. It was a very 1960s countercultural thing to do, and I learned plenty. I drove there, and then back home to Towson, so between school and the band, it made perfect sense to me to have my own car. My shabby Corvair stuck out like a dirty sock in the St. Paul’s parking lot dominated by upper-class Firebirds, GTOs, Impala convertibles, and tricked-out Jeeps.

I was the only one in my neighborhood and non-private school friends to have a car. None of the band members did.  Pretty soon, Eric discovered my Corvair, and was suddenly motivated to nurture our friendship. He invited me to his house, where we’d talk politics, music, books and history. Most of his other friends had little more interest than getting high and listening to psychedelic rock, so he saw me as a fellow traveler who had common interests that were important to him. Plus, I had a car!

Eric told me his story of becoming a world-famous antiquities thief. In sixth grade, he collected autographs from notorious deep-South racists like George Wallace, Strom Thurmond, and Lester Maddox. He wrote gushing letters claiming to be writing a school report about them. They sent him autographed photos, bumper stickers and other paraphernalia, often emblazoned with Confederate and KKK symbols. He thought they’d have historical value and would show them to friends when getting high. Though obsessed with the Civil War, Southern culture and history, Eric wasn’t at all racist. He just wanted to be different—and a rebel. His preference for black music and fierce dedication to civil rights proved it.

Eric’s desire to collect rare items extended to Edgar Allan Poe—a Baltimore icon. Poe lived in Baltimore, on and off, and met his wife/cousin, 13-year-old Virginia Clem, there. Baltimoreans know the sad story of how Poe was dragged off a train, drugged, brutally mugged, hospitalized, died in a few days and was buried in a churchyard here.

Baltimore’s football team is The Ravens, after Poe’s “The Raven,” a dramatic portrait of a lonely widower going insane—without a shred of irony. As a historian, Eric discovered that Baltimore’s Enoch Pratt Free Library had a substantial collection of Poe artifacts and documents, including letters, locks of hair, and a sliver of wood from his coffin. Eric wanted to see these things for himself, took his sixth-grade notebook, walked to the corner bus stop, and headed downtown.

Back in 1962, the Pratt Library was a sleepy, but imposing neo-classical temple that filled a whole block in downtown Baltimore. The Poe Room was open to anyone who might stumble upon it. They were free to browse through the original letters by Poe and his relatives. Eric relished such magical objects that were, in his eyes, made by the hand of God.

That devotional respect, however, couldn’t restrain the temptations of a 12-year-old boy from a dysfunctional Catholic family, who rarely had a dollar in his pocket. It occurred to him that it would be easy, alone in the hushed Poe room, to slide a single sheet, written by Poe himself, into his school notebook, and walk out the open door the street.

Nearby was the store of a noted rare book and document dealer, John Gach. Half-curious, and half-greedy, Eric walked in, with the letter tucked in his school notebook, and told Mr. Gach a story. He lived in Towson, at his grandmother’s house, and had been looking through an old trunk stored in the attic. He found an album of old photos, and this letter was inside. He wondered if it had any value, so brought it by the store.

In 1962, when a 12-year-old could ride a bus across the city, Mr. Gach didn’t question it. He was surprised to see it was an original letter, and from Poe’s clear script, he could read several relevant facts. It was written from New York, to his wife, mentioned other Baltimore relatives, and his need for money. If genuine, it was indeed an historic document.

Mr. Gach was an expert in rare books and documents, with customers from all over the world. High quality forgeries were a ridiculous possibility in Baltimore, and here was this innocent kid with a very plausible story. He took a chance, and offered Eric $200 cash on the spot. Gach told Eric that if he found anything else, to bring it in, and he’d be happy to look at it.