Scenes from a Baltimore Book Festival

Hoping for a new “normal” in the city. 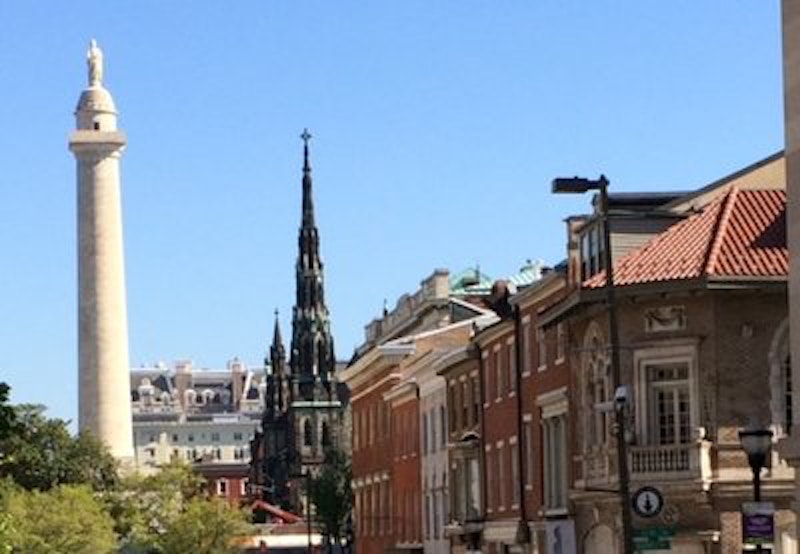 I drive into Baltimore City at least once a month but this weekend was my first time there since things changed. I was scheduled to speak at the CityLit book festival at the Enoch Pratt library on Cathedral St. downtown. Event organizers had announced that despite a huge planned march/rally, the event would be held if the library was still open. Notably, even in the most affected neighborhoods, the public libraries had remained open.

The first thing I noticed upon entering the city was a camo tank. It was out of place next to the Ravens’ M & T Bank Stadium, the parking lot of which was filled with police and military vehicles. As I entered downtown, the mood was quiet and somber despite the beautiful weather. Not many people walked on the street. A few cops, a dog walker, a jogger. Lexington Market was open, though police surrounded the block. Buildings were boarded up, not always because of damage, but often to prevent it. Signs noted new closing hours due to curfew.

I parked at a deck near the library and took the above photo, thinking Baltimore is still beautiful. I saw a BLACK LIVES MATTER sign on a church while walking to the library, arriving about 20 minutes before they opened. The building is across the street from a women’s homeless shelter. A few of the women waited in front of the library and one was yelling very loudly: “FRESH OUT OF THE SHOWER” and “CELIBATE AND PROUD” and “YEAH I’M CRAZY DON’T FUCK WITH ME, WHORE!”

I stood with a box of books in front of me. A small crowd of about 30 authors, literary arts board members and homeless waited for the public building to open. A woman approached me and asked how much my book was. She said she’d like to read it but didn’t have any money. She wore homeless-shelter-issued slightly worn clothing, heels, but a blouse with a hole. She has a GUEST badge on from the homeless shelter, and it took me a minute to realize she was the FRESH OUT OF THE SHOWER woman.

The others in the group looked awkwardly at me. I listened to her story. She was going into the library to “investigate” the woman her “baby daddy” left her for. She lost custody of her daughter Mariah. We both like Mariah Carey. Apparently, she has Tourette’s, because occasionally she’d walk away from me and start yelling I KNOW WHAT YOU DID, DIRTY WHORE and things to this effect. Once, she actually said, “Excuse me” to go do this loud yelling. She said she’d like to read my book. I pondered warning her about the sex in it, but given her most-frequently-yelled declarations, decided against it. I handed her a book, and she was happy to receive it, putting it into her battered purse.  She just seemed to need someone to listen to her. She said she was tired, done with this shit.

A man beside me collapsed and started having a seizure. Girl Scout leader first aid training kicked in—I pointed to the man who called 911 first, told the crowd 911 had already been called, and asked if there was anyone with medical training. The man’s wife said he had epilepsy. A guy with a Red Cross card was helping the man, telling people to back up and give him space. There are always sirens, hopefully one is an ambulance on the way. Authors stacked cardboard boxes around him so he wouldn’t be trampled when the doors opened. I lost track of the dirty-whore-yeller woman in the shuffle and entered the building when it opened. The 1882 interior took my breath away. A noted poet read a Freddie Gray poem to open the event, which was still held despite lowered attendance, because the arts always go on.

As I drove out of the city, I looked out my window and saw a line of about 12-15 police in riot gear, lined up every few feet in front of a row of abandoned, boarded-up buildings. It was surreal, but it won’t always be this way in Baltimore.