Renn Faire is Not an Event, It’s a Lifestyle 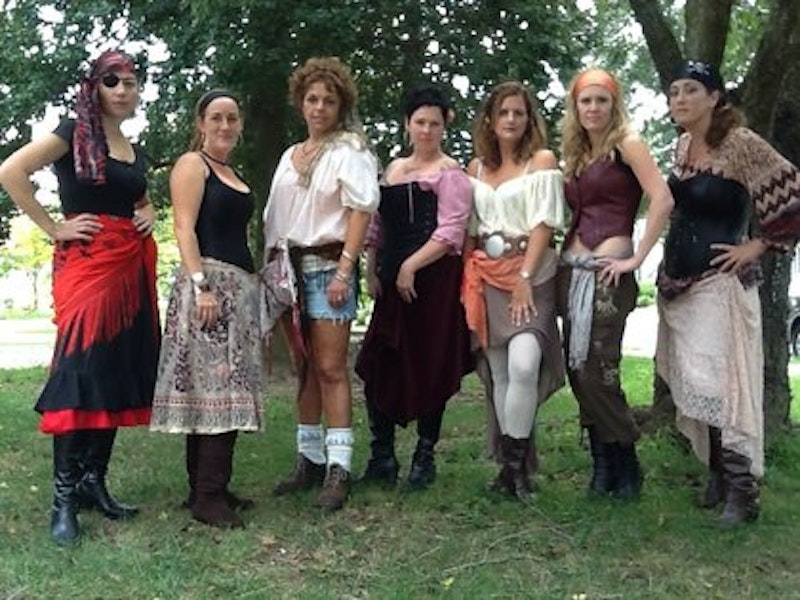 Last weekend I attended the Renaissance Festival in Crownsville, MD for the first time. I’d heard people talk about Renn Fest in the past, but had no idea of the magnitude of the operation until I set foot on its wooded 25-acre village grounds.

I’d always thought it was an event held annually at the fairgrounds, and had no idea that “Revel Grove” is actually a permanently constructed reproduction 16th century village complete with full-scale buildings including shops, taverns, restaurants and stages and that in fact Maryland’s Renaissance Festival is the second largest Renn Fest in the country (To Texas. Where else?)

A friend is getting married next Saturday and she wanted her bachelorette party to be a bunch of girlfriends dressed like pirate wenches all land ho-ing our way over to Renn Fest. In the beginning I was skeptical—I’d always thought of the event as a more kid-oriented, kitschy, campy thing that I wouldn’t enjoy. I was completely wrong.

Although I don’t drink wine because it gives me either a headache or a migraine, I loved the raspberry wine, and was able to dodge its results with an 800 mg Motrin. I tried a smoked turkey leg for the first time. These turkey legs are not for the culinary weak of heart. It’s basically a tough turkey leg-shaped Slim Jim. Difficult to start eating, but once you get into it and sort of go all medieval and don’t care that you look like a bad episode of the Flintstones, it’s even more difficult to stop eating it.

I had fun dressing up and would like to report that leather corsets (that’s me on the right in the picture) are not comfortable, and that you may select to eat a turkey leg or an entire funnel cake that creates enough white powder on your face to resemble an 1980s coke addict, but that once that corseted fucker is laced up, both food items (plus two raspberry wines) do not fit simultaneously inside the unyielding boundaries of the leather.

Some people take the Renaissance Festival quite seriously. By seriously, I mean, holy lords and ladies, people, this is some massively cult ass level shit. Costumes, makeup, footwear, hats, dangling things off belts and other accessories, and language (Hear ye, hark huzzah!) are all signs that a person is at the Renn Fest because they either a.) work there or b.) have a season pass, because the Renaissance Festival is not an event, it is a lifestyle! I’m sure that this level of it-takes-a-medieval villager people did not appreciate my use of the iPad and the Facebook status updates of several of my friends.

Also, randomly, there was a tornado warning while we were there. We are advised strongly to seek ye some shelter, but there really isn’t much to be found so the seven of us sort of huddled near a bar and formed a penguin circle with our heads together until it passed. I protected my iPad inside a pirate-looking satchel that I kept firmly under my pirate skirt and between my legs so it wouldn’t get wet in the sideways-rain deluge. (What’s that? Did I pretty much use my vagina to protect my Apple device during a tornado? Yes, I did. Exactly the way Steve Jobs would have wanted it.) When it was all over, we looked more authentically like pirates somehow.

When you’re in your 40s, you don’t usually get to have fun, so the experience took me by surprise. The music and entertainment (and possibly the raspberry wine) made me laugh and dance, I loved seeing the die-hard costumed people walking around pretending to be someone else, and I think I would absolutely go back again. But next time I won’t wear a leather corset, because I want to try the fried macaroni and cheese.