Who knows how they keep winning. 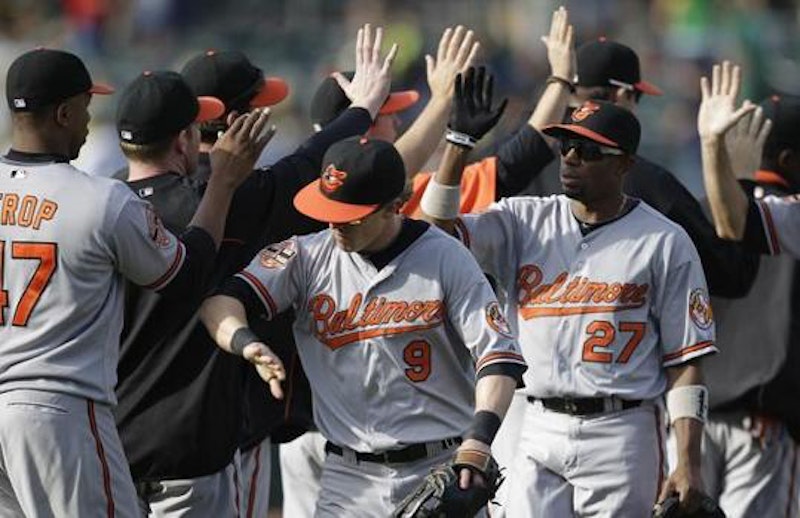 The Baltimore Orioles defeated the Oakland A’s 9-5 on Sunday afternoon in a game that salvaged the trip to the Bay Area and a sports Sunday in Baltimore. The win also gave the Orioles their 82nd win of the season and kept them one game behind the first place Yankees in the American League East. There’s a sentence I never thought I’d write. (And last night the O’s beat the Mariners to pull with a half-game of the Yanks.)

Back in January I wrote a column in this space titled “Dan Duquette’s Island of Misfit Toys,” in which I bitched about the new Orioles’ General Manager shopping in baseball’s bargain bin. After four years of Andy MacPhail crowing about growing the arms and buying the bats the Orioles didn’t appear to have enough of either. Dan Duquette didn’t appear to be doing much to augment the roster. Now, eight months later, the Orioles are in the lead for the AL’s second Wild Card and just a half game behind the Yankees for the division lead.
Thank you Dan Duquette.

The Orioles are baseball’s best story of 2012. Enjoy the ride and don’t worry about the why. Don’t worry about how the team will fare in 2013.  It’s been 14 long seasons of ineptitude, botched free agent signings, and unproductive drafts. Not only will the Orioles finish above .500 for the first time since 1997, but they have a real shot at the playoffs. If the season ended today the Orioles would travel to Oakland for the one-game Wild Card Playoff.

I’m not exactly sure how the Orioles have done it. Frankly, I’m through with trying to figure it out. The starting rotation is still a patchy. The team still has a negative run differential, a fact that has the sabermetricians pulling their hair out. The team has fought though injuries to pitcher Jason Hammel, Nick Markakis, Jim Thome and Wilson Betemit, as well as presumed leadoff hitter Nolan Reimold.

Nate McLouth hit a leadoff home run against Seattle last night. Nate McLouth! The veteran outfielder was cut by the Pittsburgh Pirates in May with a .140 batting average and two RBI. The Orioles gave him a second chance and sent him to Triple-A Norfolk. McLouth hit well enough in Norfolk to earn a shot with the O’s in August. Left field had been a revolving door in Baltimore since Reimold went down with a neck injury in April. McLouth, who was immediately inserted as the everyday left fielder, went from baseball’s scrap heap to starting for a contender quicker than you can say “Lew Ford.” When leadoff hitter Markakis suffered a broken thumb against the Yankees it was McLouth who was tapped as the Orioles’ new leadoff man.

McLouth has made the most of his second chance. Duquette has done the same. After being out of baseball for a decade, and hired as an apparent last resort in Baltimore, Duquette has quieted his critics. He has something to prove and so do these Orioles.  Hammel came to Baltimore as a former prospect who never lived up to the hype and has since emerged as a top-flight starter. Wei Yin Chen came to the United States in the shadow of Yu Darvish and has evolved into Baltimore’s most reliable starter. Chris Tillman looked like a career AAAA pitcher who would never succeed in the Majors. He’s now 8-2 with a 3.22 ERA in 12 starts. The list goes on and on from Miguel Gonzalez to Darren O’Day, Pedro Strop to Omar Quintanilla, Randy Wolf to Taylor Teagarden.

Buck Showalter deserves the Manager of the Year award, and perhaps a medal, for the manner in which he has steered this squad. Duquette and Showalter expertly massaged the 25-man roster week to week to maximize matchups. While the Orioles have budding stars in Adam Jones, Matt Wieters, and Manny Machado, much of the team’s success this season rests at the feet of those other guys. The players that baseball forgot keep coming up big in Baltimore. Can the Orioles’ improbable success last through the postseason? Why not?