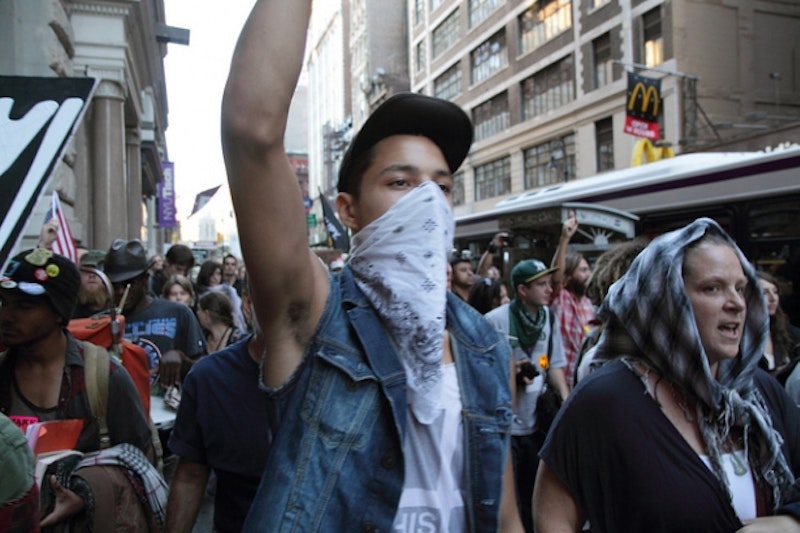 September 20th marked MICA's eighth annual Constitution Day symposium, which brings together writers, activists and artists for a lengthy moderated discussion. Past years have brought the likes of John Waters, Dan Savage, Andrew Sullivan, Amy Goodman and Angela Davis to campus, and this year's panel included artist Lize Mogel, long-time activist Lisa Fithian and philosopher Cornel West. WYPR's Aaron Henkin led the discussion, which was primarily focused on the freedom of assembly (read: Occupy Wall St. at its one-year anniversary). Each panelist was given five or 10 minutes to talk briefly about activism and American democracy in 2012, and perhaps predictably each panelist worried about our increasingly infringed-upon First Amendment rights. Fithian was downright angry (as you might be too if you'd been arrested hundreds of times over the last 40 years, and declared a terrorist by your own government). West was as passionate as ever—even if he's been recycling the same material for at least a decade. And Mogel was altogether too practical for the other two.

OWS took up the better part of the discussion: with Fithian talking about its organizational structure and the actual activist strategies employed, while West considered its importance more generally (how it galvanized a new group of people who had never protested before). West had one of the more interesting points of the night, responding to Henkin's quoting of a recent New York Times op-ed by Joe Nocera that suggested OWS had failed, in part because it had never had a clear objective. To West, this missed the point. OWS was never an organized social movement (those are rare indeed, he said), rather it was a locus of frustration, anger and hope, a forward-pushing swell. What was important was the protest itself—the exercising of the rights of assembly and free speech.

All three took swipes at rallies by media pundits like Glenn Beck and Jon Stewart, suggesting they were little more than political theater, and there was some awkward stumbling by Henkin after several members of the audience sent in questions about Pussy Riot (it wasn't altogether clear Henkin knew who Pussy Riot was). All three, however, applauded the band's courage.

Perhaps the most interesting question of the night involved the recent convergence of protests and technology—the use of Twitter to mobilize protestors during the Arab Spring, for example. All three had their reservations. Earlier in the night, West had busted out his "weapons of mass distraction" line, and both Fithian and Mogel agreed: technology too often equals spiritually-deadening entertainment (who wants to protest when can play Angry Birds for 12 hours?). Venues like Twitter and Facebook and message boards are great for organizing, until the government uses those same technologies to start tracking you, or until they shut them down altogether. What no one mentioned, however, was the prevalence of cell phone video cameras in recording police brutality or obstructions of justice—pepper spray a cordoned off group of female OWS protestors and your name will be all over the evening news within 24 hours. They'll replay the video endlessly on CNN, Fox, and MSNBC. Say what you will about technology's effectiveness as an organizing tool, no one's getting away with anything anymore, and that's just fine by me.

WYPR's The Signal will air parts of the conversation sometime in the next few weeks.