Pt. 2 of an interview with Wham City's Adam Endres. 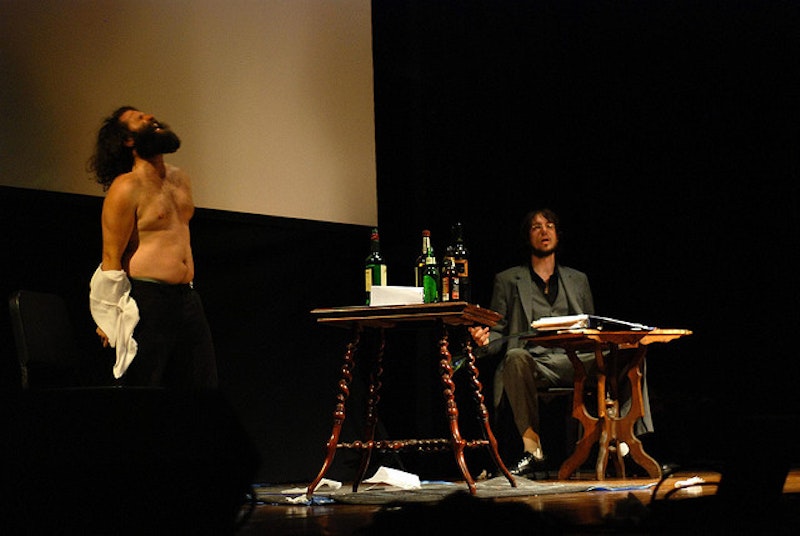 You can read Part 1 here. I interviewed Endres earlier this summer, shortly before he left Baltimore to work on a traveling production of Les Miserables.

SPLICE TODAY: Why don't you tell me about Les Mis?

ADAM ENDRES: My friend Donna [Sellinger] from Wham City is putting it on. Missoula Oblongata is her theater company that she's been working with for a while. She likes my work so she asked me to be the main guy, Jean Valjean. Originally, I said I didn't think I could do it, because of work, but finally she convinced me. So for we'll be up in the northern part of Vermont, 60 to 100 of us, rehearsing the whole month and then July 1-8 is tour.

ST: Where are you touring?

AE: We'll do one show in Vermont, one in Providence, two in NY, two in Philly and one here.

ST: Where is the one here?

AE: I don't know actually. We don't have the rights to it so it's technically illegal to be doing what we're doing, so it'll probably be at some warehouse somewhere.

AE: It's incredibly ambitious; it's like a two-and-a-half hour play.

ST: Can you tell me about some of the other theater work you've done in Baltimore?

AE: Yeah. Um, Beauty and the Beast was the first thing.

ST: But it hasn't all been through Wham City, has it?

AE: No, it hasn't. I purposely try to challenge myself—that's part of my art. I don't want to just act or make music. Last year I did the Baltimore Rock Opera. That was great. A few months back my girlfriend and I played songs for children. I've done stand-up comedy. Whenever Ed Schrader does one of his talk show things I'm one of the main writers and contributors for that. I did a musical called "Sad Little Pony." I wrote and directed another play called "A New Play" that was part of a big Wham City event at The Walters—it was really just an excuse to write a play with a sword fight in it.

ST: Oh yeah? So you had to find actors who could wield a sword?

AE: Yeah, Mason and this guy Sean Blue, I knew they both had experience with that. Oh, and then there was Jurassic Park, which was another Wham City Beauty and the Beast kind of thing.

ST: You also booked all the shows at The Zodiac, right?

AE: Yeah, I was responsible for booking shows at The Zodiac but I never really liked it—and it's not even like I was really putting together lineups or anything. Usually a band would just come to me and say, "Hey, we want to have a show with this band, this band and this band" and I'd be like, "Okay, do it."

AE: I don't know. It's kind of fun, but it's strange because I don't ever really listen to music. It's like, I go to so many shows anyway, or if I'm at someone's house they'll put on music, but if it's just me at home I almost never choose to put on music. So it's like, I can never remember what bands should play with what other bands, you know?

But to go back to what we were talking about before: There's also been a few performances I've done that have been, um, spiritual in nature. I don't really want to use the word "shamanistic," but I've done this one performance a few times where I have the audience concentrate on all the negative things in their life and then they blow into a bottle and smash the bottle. Then I had one at Whartscape, some Thursday night thing, where I asked anyone who was in touch with their Inner Truth to come up on stage and then I'd ask them a series of questions, which are kind of silly on some level but also serious, and I'd eliminate people until there were just a few left and I'd say, "If you're ready to take the next step, it might be a painful experience…" And I'd list all these things that might happen to them, you know, "You might die, you might lose your hair, you might get sick" and they'd all say, "Oh, I'm ready, I'm ready, I'm ready" and then because I'd added it in there I'd just cut off everyone's hair [Laughs].

ST: Are you religious?

AE: I'm not religious; I do feel like I'm spiritual. That's part of why I go up to the woods every summer. I miss it some time but I do try to do a little ceremony, either by myself or with my girlfriend and some friends, every full moon.

ST: What made you start that?

AE: What did prompt that? [Laughs]. I'm not really sure. I can't think of any moments where I was like, this is a path I need to take.

ST: Are your parents religious?

AE: I was raised Catholic. My dad still goes to church every Sunday. My mom never went to church except with the family on Christmas. I'm not into church though. I think Christianity is kind of bad on many levels. I think it can really help people but too many people use it to be like, "Well, you're wrong." But I believe there is a divine reason to things. You know, there's gotta be more to life than this, there has to be a bigger purpose, and I want to find it. That's also the reason I'm an artist, you know, I want to help people on some level. I think of my art as something I'm giving to the world but I also feel like that's not enough. Really, it's an easy trap to fall into as an artist, like, "Oh, I'm an artist and that's what I give."

ST: Do you think a lot of your friends look at art the same way? Is that what brought everyone in Wham City together?

AE: Not really. I feel like a lot of people in Wham City actually don't have those thoughts. Connor certainly does, and Josh certainly does. But part of Wham City's whole style was to be like, "We don't make art that means anything, we're just having fun!" And there's part of me that's definitely gotten bored with that over the years. And I don't mean to put anyone down, I enjoy all their work, I like that they're doing it, but it's just not the kind of stuff I want to be doing anymore. I want to make art that makes people think. You know, you can go see The Avengers and that's great and all, but something like Tree of Life will actually make you think.

ST: You have a couple of older sisters, right? Where are they?

AE: They're still both in the Albany area. They're married and they both have kids.

ST: Do you get the talk from your parents, "When are you finally going to settle down?"

AE: I get that from my dad—but not in like the settling-down-with-a-woman kind of way, just the, "So, when are you gonna get a real job?" I remember when they first came to Baltimore after I moved here, they came to The Copycat to visit me and my dad actually refused to come inside, he just sat in the car. Meanwhile, my mom comes inside and she's like, "Wow! Neat!" [Laughs].

ST: So after Les Mis you'll be up in the Adirondacks for a while?

AE: Yeah. My parents will probably come down for one of the NY shows. And then I'll go back to Albany for a week and visit with them, and then I'll be up in the Adirondacks for a couple months.

ST: Have you thought about leaving Baltimore? Like, is this a way to get out of Baltimore long enough that when you come back you're excited to be here again?

AE: Yeah, that's definitely part of it. You know, I'd like to live in the mountains somewhere. I think my ultimate goal is that, somehow, my art will start making me enough money that I can just live wherever I want and keeping making art, but we'll see if that ever happens [Laughs].