You did as much for Baltimore football as anyone. 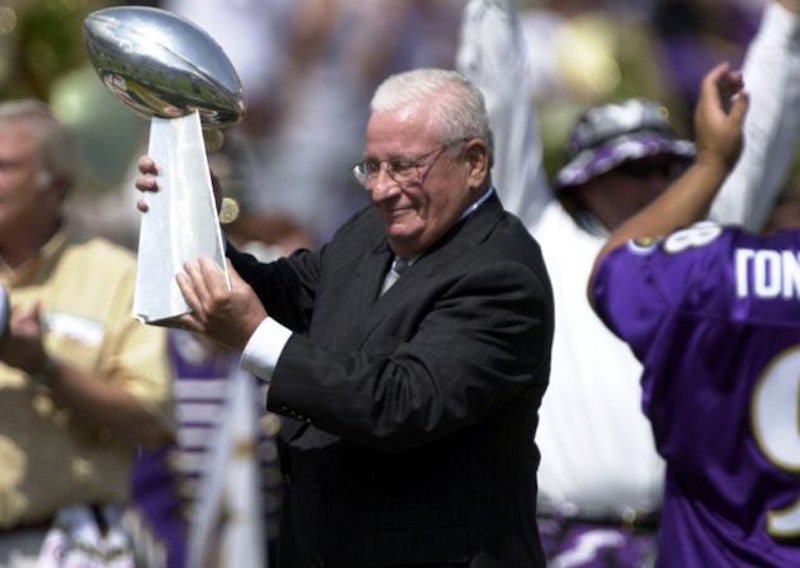 The Cleveland Browns announced that they would be moving to Baltimore in the fall of 1995. I was a college sophomore at the time. The news of the impending Browns' move was a double whammy for me: not only was football coming back to Baltimore, but it was my favorite team that was moving. I still vividly remember wearing my Cleveland Browns hat to class on the morning after the announcement.

I was seven years old when Robert Irsay's Colts bolted for Indianapolis in the middle of a snowy night. I grew up in Baltimore hearing tales of the Colts glory days, Irsay's betrayal, and talk of the city possibly being awarded an expansion team. I knew two things about football back then: 1) I was genetically programmed to hate the Redskins and 2) John Elway sucked. The hatred of Elway led me to root for Art Modell's Cleveland Browns, who spent a lot of the late 1980s getting tortured by Elway's late-game heroics.

Modell died on Thursday morning at the age of 87. His death was greeted by an outpouring of emotion and gratitude around Baltimore. Ravens fans took to Twitter in droves to thank the one-time patriarch of the franchise for returning championship caliber football to Baltimore. I would imagine Modell's death was treated much differently in Cleveland, and rightfully so.

While Ravens fans are right to thank Modell for returning the NFL to Baltimore it should be noted that it wasn't an act of charity. Modell was in a dire financial situation in Cleveland. The longtime Browns owner needed a golden parachute and the Maryland Stadium Authority, fresh off numerous prior relocation teases and the expansion disappointment, happened to have an attractive offer in place. Modell made the best decision for his business and agreed to relocate the franchise to Baltimore. If Las Vegas or Sacramento had made a better offer than Baltimore's, Modell would have likely made a different decision.

Modell's name has been vilified in Cleveland in much the same way that Irsay has become a curse word in Baltimore. The fans of Cleveland had a right to be upset with Modell and the civic leaders that allowed their beloved Browns to be taken away. The city was quickly awarded an expansion team and Modell agreed to leave the team name, colors, and records in Cleveland. Still, some wounds never heal.

The Browns are set to embark on what is likely to be another season as the doormat of the AFC North. Modell hasn't owned the Cleveland football franchise for 16 years. It's probably time for Browns fans to direct that anger someplace else. Mike Holmgren would be a good place to start.

While Modell and Irsay made similar business decisions and left a multitude of crushed fans in their wake, it should be noted that from nearly all accounts Art Modell was genuinely a good guy. Cleveland fans won't take solace in that but Modell should never be compared to Irsay. The worst thing anyone can say about Modell is that he moved the Cleveland Browns to Baltimore; even Irsay's mother didn't have a kind word to say about him. Modell's impact went beyond the field as he made sizeable charitable contributions to both Baltimore and Cleveland.

Rest in peace, Mr. Modell, and thanks for choosing Baltimore, and getting those goddamned Redskins off our TVs every Sunday.