The Stories Have To Be Told

Writers in Baltimore Schools offers a creative outlet to kids who are mostly taught to pass tests. 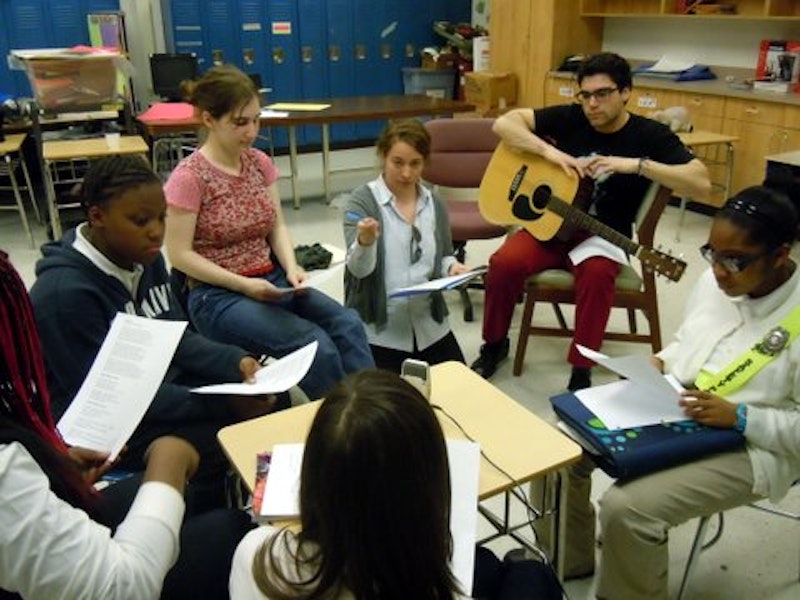 I just spent a week in the woods with 14 teenagers who used to be my students.

As a former Baltimore City classroom teacher, I was constantly reminded—not often gently—to adhere to district, state, and federal standards. Though given a decent amount of freedom to tweak the language arts curriculum, I was first and foremost responsible for student mastery of MSA material and student discipline. This was a less than compelling use of my energies as a teacher. I tried to jazz up the curriculum, introducing creative options for my unbelievably gifted middle schoolers, and partnering with Writers in Baltimore Schools, an education reform outfit aimed at bringing creative writing to an underfunded, overcrowded district burdened by state and federal mandates to shape up despite a deeply strapped budget.

26-year-old dynamo Patrice Hutton, a graduate of Johns Hopkins’ Writing Seminars program, established Writers in Baltimore Schools in 2008 to fill an important gap in creative writing. Thanks to No Child Left Behind, Baltimore City lives and dies by standardized test results, leaving little room for creativity or students’ personal expression. Hutton, who was accepted to the biggest and most prestigious name in education reform, Teach for America, turned it down to nurture the creative drive she saw in Baltimore’s schoolchildren.

The program began with pullout instruction for four schools, in which interested students could volunteer for writing enrichment taught by Hopkins undergrads. As the program matured, so did Hutton’s vision. Soon, she was partnering with teachers, like me, to teach workshops and mini-lessons in the classroom setting. Students’ work from these sessions was funneled into two anthologies: Baltimore by Hand, and Baltimore Tales, both self-published.

The WBS curriculum relies heavily on The Writing Process: through small workshops and one-on-one conferences, students revise and refine work until it is publishable and performable, a thrill they rarely get in a classroom setting, which offers limited opportunities for extensive individualized attention or public performance of finished works.

“Student ownership is a huge part of WBS,” Hutton explains. “We want kids to see a project through, from start to finish, from idea to tangible product,” a vision that’s not so easily accomplished in Baltimore’s crowded classrooms. Students got a crash course in ownership over the five days they spent at the Mar-Lu-Ridge campsite in Jefferson, Maryland. This was WBS’s first sleepaway Young Writers’ Studio, and the first time that many of these young writers had participated in this sort of activity.

The informality of the setting was exactly what Hutton had envisioned when she began dreaming of a sleepaway writing camp. “It was important that this be a safe space,” she says. The isolated campsite was a retreat from Baltimore’s tough neighborhoods, and the camaraderie that sprouted unexpectedly between students made workshops and discussions a pleasure for students and instructors.

The open and respectful environment was the perfect forum for creative exploration.

Students flirted with difficult subject matter, and received honest and detailed feedback from the five instructors, all of whom were writers and teachers. The camp was anything but cliquey; though I was terrified that in-school norms would apply, the four boys and 10 girls, ages 12-16, achieved not only parity but also friendship. Kids who hadn’t acknowledged one another all year were suddenly slinging their arms around each other’s shoulders and saying, “This is my brother!” Nicknames were established. Private jokes abounded. And a camp dance routine, called “The Buttmilk Dance,” was formed, to our endless amusement.

Amidst the gaiety, actual writing emerged. Hutton, who is working towards a Masters degree in writing, led workshops like “World Building,” in which students were asked to consider the nitty-gritty of spatial and temporal setting, and create a faux-Wikipedia page for a science-fiction world of their own making. Inspired by a class he took in his Hopkins MA program, Mike Shattuck, another WBS instructor, taught a workshop called “Grammar for Writers,” which focused on sentence structure because “we cannot, in good conscience, let kids go through our program without some basic writing skills.” Workshops on ghost stories, descriptive writing, and free-writing all rounded out the program, which culminated in a reading at the Terra Café in Charles Village.

Confident in their work, students stood before parents and friends, and read pieces they had spent a week writing and editing. Thanks to Hutton and her team of writers and educators, WBS gave 14 teenagers an incredibly fulfilling week of creative writing instructors, preparing them for the academic year ahead.