My home town is burning. 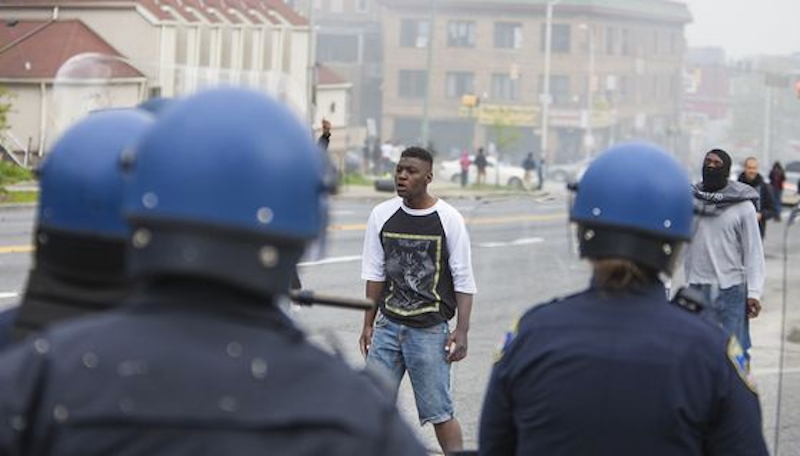 I spent the weekend visiting friends and family in Maryland, and there was some appeal to the idea that while I love and loathe my home state, the scale tips more toward loathe with each passing year. Today, in response to a particular strain of anti-protest internet vitriol that had bile bubbling up in my throat, I felt the need to explain, as tenderly and thoughtfully as possible, and in the interest of humanism, that peaceful protest, anarchy, and looting are not, in fact, part and parcel. The plan was to liken looters, anarchists, and other such opportunists to familial black sheep, to reason that the bad actions of a few outliers are in no way representative of the desires, fears, and dreams of the resistant aggregate. But then, over the course of the day (Monday), it became very clear that we’re far, far beyond the point where a (hopefully) nuanced comparison might possibly change anything, sway anyone clinging to more narrow-minded perspectives, or matter, even a little bit.

Baltimore on Saturday morning was Baltimore in most ways that count, at least the areas I found myself in and around at the time: an immersion tank center in West Baltimore, a Salvadoran restaurant on Broadway for lunch, Soundgarden Records. The city was as it always is, not quite awake or coherent, broken glass everywhere, urine and mold rank on the wind. After someone mentioned that a demonstration was brewing, the air seemed to crackle a with new electricity. “Are you guys going?” my friend and I were asked. We weren’t, I replied, guiltily. I remembered the college Philosophy professor who I’d idolized and stayed in touch with briefly after graduation, who stuck my email address on protest action lists and was always irked when I never made it out to any demonstrations. The sad fact is that the strength of my personal convictions has never quite been enough to overcome an intense antipathy for crowd scenes of all kinds. For better or worse, I’m stronger and more resolute when wielding a computer keyboard.

In the wake of Ferguson, I wrote a bit about police brutality, racism, and the scary possibility that what happened to Michael Brown could, conceivably, befall my own son someday. Brown and Eric Garner’s deaths really shook me, deeply, in a way that few things have been able to in adult life—massive, tidal waves of hopelessness. As I type these words, Baltimore is burning and its residents have taken to the streets, and the world is watching it happen on television. As devastating as the “why” is, it’s the “what” that leaves me weary and worn instead of shaking with righteous indignation. This is more than the chickens coming home to roost in an American city with a widely documented police brutality problem; it’s a city where many of my friends, family, and colleagues live and work, going haywire, the National Guard moving in, and it’s anybody’s guess what’s next.