Baltimoreans Seek or Duck the Spotlight 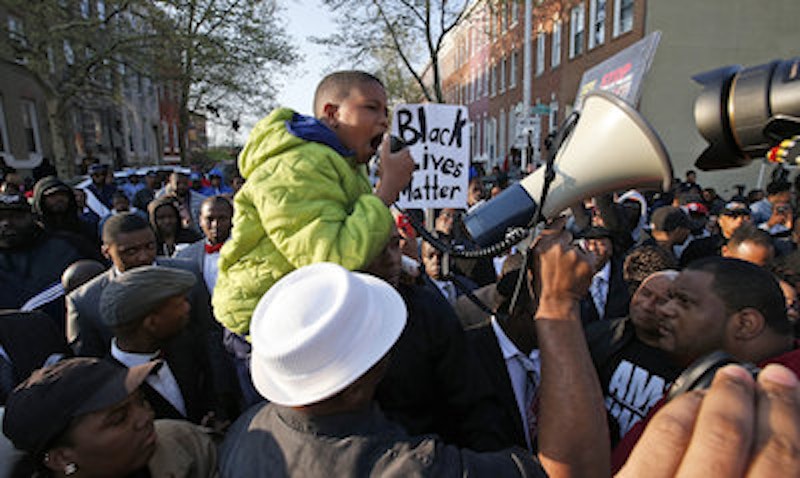 At the peak of the civil rights movement in the 1960s, aggrieved blacks and other minorities turned to the Supreme Court for relief because of its willing ears and liberal record dating back to Brown vs. Board of Education. The direct route to the federal courts was necessary because legislative bodies, including Congress, were viewed as unresponsive to the cause of black freedom.

Today, because of a paralytic Congress, bitter distrust of police departments and local governments as well as a conservative high court, blacks have focused their attention on the Department of Justice for grievance resolution, in part because the attorney general is a black appointee of the nation’s first black president and, frankly, because there is no where else to turn. The Justice Department has become the nation’s police force.

And now civil rights activists have a new and powerful ally that doesn’t fib or make mistakes. The most dramatic difference between now and then is the universal presence of video equipment, in one form or another, portable or stationary. There are more than 600 street-corner video monitors in Baltimore’s high-crime areas, including eight along the street near the Gilmore Homes where Freddie Gray was arrested. (Great Britain has more than four million camera-monitors, including one, ironically, outside the window of 1984 author George Orwell’s former fourth floor apartment.) Whether every cop in Baltimore should wear a body camera has provoked major debates in City Hall as well as the State House in Annapolis. Gov. Larry Hogan (R) has said he will sign into law guidelines for police body camera use.

Wherever a person goes—a gas station, bank, supermarket, pharmacy—there are monitors recording images. The average American is photographed an estimated 400 times a day. Gray was photographed by a neighbor as he was shackled and dragged across a Baltimore street and placed in a police van, unbelted, which became his coffin.

The episodic link across the decades, from Selma, to Ferguson, to Baltimore, is, of course, the modern agora of the aggrieved—the streets. For the past week, days and nights, thousands of protesters have jammed Baltimore’s streets to demand justice for the death of 26-year-old Gray who apparently suffered a severed spinal cord while in police custody, slipped into a coma and died a week later in a hospital. Police acknowledge neglecting to summon medical help when Gray cried out for it, which was a violation of police procedure.

Demonstrators, largely peaceful, had blocked I-83 ramps, clogged streets and virtually shut down City Hall as a precaution. Hogan dispatched 32 State Policemen to the city to assist with crowd control. City officials and black leaders are concerned about the possible infiltration by outsiders who might agitate disturbances and violence as they did in Ferguson, MO, following the shooting of Michael Brown, an unarmed teenager.

There have been calls for a special session of the General Assembly. And Hogan, was urged by City Council President Jack Young, to direct the state’s attorney general, Brian Frosh (D), to undertake yet a fourth probe of Gray’s death but declined, saying he didn’t want to “make politics” of the misfortune.

“We spoke with the attorney general’s office as well,” Hogan said. “First of all, interfering in that investigation would not help. It would probably hurt. We don’t want to make politics out of this tragic situation. I had a long discussion with the state’s attorney. I believe that she is on top of the case. We now have the federal government. The last thing we need is three different people stepping all over each other.” Young seemed satisfied.

Exacerbated by events this weekend, Baltimore is now in the national spotlight, the kind of attention the quirky, down-at-the heels city doesn’t want as it tries to replenish its depleted population and attract business, especially the tourists who traffic its harborside attractions as the shorts-and-tank-top season begins. Cable TV has provided to-the-minute, breaking news coverage of the convergence on the streets and the official pronouncements at City Hall.

And with the televised imagery, Baltimore joins the growing list of cities where young black men have died at the hands of police—Ferguson, Cleveland, Staten Island, and Charleston, SC. Some were caught on video as was Gray’s arrest.

By most accounts, Baltimore officials have moved swiftly to preserve calm and prevent violence. Mayor Stephanie Rawlings-Blake, Police Commissioner Anthony W. Batts and his deputy, Jerry Rodriguez, held a news conference at which copies of the monitor recordings at Gray’s arrest site were distributed to reporters. They showed nothing but deserted alleys. The six officers who were involved were suspended (with pay). And the cops have promised a full report by May 1. Blacks have demanded that the six cops be charged with murder.

Baltimore’s police department is already under review by the Justice Department, invited by Batts to assess its performance and make recommendations. Batts was hired and brought here from California, and since his arrival at least two six-figure consultants’ contracts have been awarded by the city to help Batts revamp and improve the department—replicating the reason he was brought to Baltimore in the first place.

Yet suspicion persists. Blacks are accusing Rawlings-Blake, who is black and the daughter of a community legend and legislator, Howard “Pete” Rawlings, of not responding quickly enough. And they have rejected the reassurances of Batts, who is also black. There are demands within the black community for Bates’ resignation.

They do so with the knowledge that Baltimore City has paid out $6.3 million in police brutality claims since 2011, according to The Baltimore Sun. There have been 156 law suits between 2013 and 2014. Many of them have been filed by one of three black attorneys, among others—Dwight Pettit, Warren Brown and William “Billy” Murphy Jr. Murphy is the attorney for Gray’s family.

Murphy knows his torts. He’s a former Circuit Court judge (and an accomplished jazz drummer), the son of a Circuit Court judge and a member of one of Baltimore’s prominent civil rights families whose sister is legal counsel in the Washington office of the ACLU. He is a skilled debater and local television panelist who pleaded his case last week on MSNBC’s Al Sharpton Show.

Hogan has said he will sign a law doubling the cap on awards, from $200,000 to $400,000, in police brutality cases and another, doubling to $800,000 awards in cases against state government. Eventually the handling of Gray by police is likely to cost Baltimore’s taxpayers money. But the biggest loss is from the constant bombardment of images of a city that joins others in what has become a nation’s spreading epidemic of senseless deaths of young blacks.