Residents should stop living in fear and actively fight the decay. 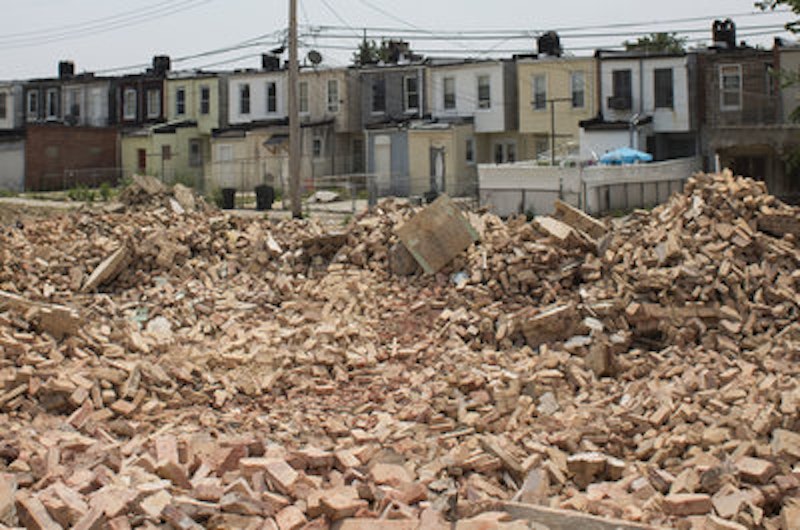 It’s not too late to make Baltimore City better. Slow down the decline and neglect from generations of corruption and dirty deeds. Heal the spirit of communities plagued by generations of drugs, gangs, guns, prejudice, and indifference. Expose the ones who take from the city and give nothing in return. You’ve heard all the catch phrases before, Harm City, The City That Bleeds, Baltimorgue, Murderland. Sounds scary. Does it take murder and mayhem in the streets? Sorry, we’re way beyond that. The critically acclaimed series The Wire doesn’t come close to the desperation and harshness we deal with here in Baltimore. I heard a radio ad on a local college station in which Mick Jagger is talking about Baltimore. The gist is, “I haven’t been to Baltimore in a while but I’ve seen it on The Wire, it’s not really like that, is it?” No Mick, it’s worse. During the last presidential campaign, Donald Trump used The Rolling Stones’ “You Can’t Always Get What You Want,” as a theme song. The band objected, but not enough. You can always get what you want for the right price.

You may wonder if it’s even possible to save a city built on a tradition of mobbed-up unions and good old boy politicians who served up the city in slices to the highest bidder. Not unusual, it’s the same scenario for every America city. This town is only a symptom of a bigger problem. Far worse than your wildest imagination. Baltimore, the tip of a rapidly melting iceberg that threatens to drown us. Can a city survive increasing violence, murder, and political/police corruption forever? Something’s got to give or we implode. Baltimore was once a sleepy burg on the Bay, with unusual charms and even more eccentric characters. We lost that moniker long ago when we became another tourist town destination. To suck money to our carnival of weird and wonderful people and places, we erected shrines for folks to see all the tawdry attractions that draw out-of-towners to the harbor troughs and watering holes. How many restaurants and bars do we need in a city with too many hungry people? We always need more.

It’s dispiriting to witness what’s going on around our town. It benefits those who take the money and run. By hook or crook, the only ones getting over at our expense are the old money clubs, the new rich, and the muggers who rob them. Recently Baltimore declared a “ceasefire” for 72 hours. “Nobody Kill Anybody.” It went into effect Thursday at midnight. It comes to this, an insane plea to stop murder. A culture of violence where the only way to solve the problem is, eat or be eaten. The last word on just how low we can go before hitting rock bottom. This is about race. You’re in denial if you believe otherwise. The endless bamboozle of rich against poor. Black and white and green money. The classic have/have not. White privilege is the new go-to cliché. There’s nothing new about it. It’s older than America. It began the moment one human put a leash and collar on another human; it never stopped with abolition, emancipation, civil rights, or desegregation. The only thing that changed since the Civil War is that today we’re all slaves.

It’s dumb that we live in fear in Baltimore City. Is life what we make it? Are we doomed? Who cares? Do you think somebody’s going to bail you out because you lost your favorite bar, like we bail out banks and corporations? Who will save your favorite alternative weekly rag from the dumpster of pipedreams? Drag out that mimeograph machine and make a weekly newspaper. Plaster the city with words. Paint the vacant walls with messages and visions of hope. Shout poetry from the rooftops. Scream into the void of city hall. If that doesn’t work, dance in the streets. Make movies, write stories, and sing songs. Act or react, for freedom is choice. Don’t wait for the city to do something. You’ll wait for eternity. If we stand together they can’t divide us.