The Mayor’s had little impact since her election. 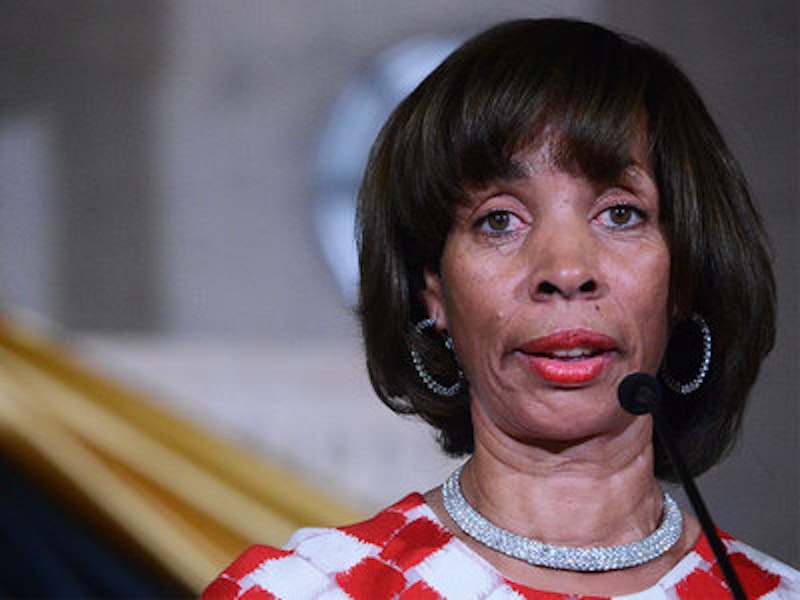 Catherine Pugh, mayor of Baltimore, seems to be everywhere but nowhere, an elusive figure in a high-profile job at a time when the city needs a bold leader to kick some butt and get the staggering town moving again.

There’s a rhythm to cities. Cities live, cities die, cities are born again and thrive. A few years back, Baltimore seemed to have found its groove. Good things were happening all over town, and, most of all, there were signs of hope. Then Freddie Gray’s death occurred, which appears to be the line of demarcation between then and now, hope and despair, go and stop. Life in Baltimore as we knew it ended in the spring of 2015. For if an alien from outer space dropped down in the city and asked a Baltimorean to take me to your leader, the Baltimorean wouldn’t know where to go.

Baltimore is paralyzed right now, under Pugh’s watch. That might seem a harsh judgement, but it comes with the job of elected leader of a big city. The buck stops at Pugh’s desk, but it’s her job to deflect the buck before it arrives.

Pugh, as a policymaker, has had little impact since she assumed the mayor’s office nearly eight months ago. She inherited a mess, which appears to have only gotten worse. City Hall is held hostage by the bad guys on the streets, by drugs that are arriving by the boatload and, to add irony to tragedy, by its own police force. The cops, who’re supposed to be role models by example, are giving the slugs on the streets lessons in bad behavior—and the reference is to only the errant few. The Mobtown moniker of the 1860s is equally applicable today.

Just last week, for example, Baltimore was the laughingstock of network news as one of its cops was accused, reinforced with footage from his own body camera, of planting drugs. And before that, a squad of super-cops was indicted for pocketing cash and other valuables from citizens suspected of crimes, and even from innocent victims. When the cop news is good, Pugh stands shoulder-to-shoulder with Police Commissioner Kevin Davis to deliver the message; when the news is bad, Pugh vanishes.

And again, on the networks, President Trump made a sly, tinged reference to there not being many Republicans in Baltimore. Read into that what you will. All of this is occurring shortly after the city signed an agreement with the Justice Department to polish the conduct of the city’s Police Department following Gray’s death while in police custody.

No current profile of Baltimore would be complete without mentioning that the city is once again Number One—the deadliest city in America, the nation’s murder capital, a veritable shooting gallery. It’s only July, and already there are 187 murders (as of this writing.) Pugh’s administration has proposed a mandatory one-year sentencing law for the illegal possession of a firearm, similar to a bill she proposed as a state senator. The bill’s passage is uncertain. Many of the guns confiscated in Baltimore are illegal imports, or straw purchases, from states with lax gun control laws, such as neighboring Virginia.

With attention like this, there’s little left to wonder why the Millennials have stopped coming and businesses are reluctant to locate in the city. Or, if the Millennials and slightly older young adults, do come, they call the moving truck when it’s time for the kids to begin school—if they can’t afford private schools. Baltimore’s population slide has resumed, and only Under Armor owner Kevin Plank’s development plans and the Amazon warehouse—oops! Fulfillment Center—have come calling. One is on the drawing boards and the other is a robotic glimpse at a jobless future. Amazon saw the future; mall developers didn’t.

True, there is development occurring, and cranes are poking the skyline, but it’s all happening around the water’s edge where people are paying a million dollars to live on the Patapsco River’s once-polluted mudflats. The city’s boarded-up core of rowhouses, an estimated 14,000 in all, the city’s great area of neglect, is the incubator for crime and hopelessness. Following the riots of two years ago, the state pledged millions for a massive demolition derby. And Plank’s real estate branch has acquired acres of urban decay in Southwest Baltimore with the promise to bulldoze, develop and transform the jobless into productive citizens.

One problem that Baltimore has had is a constantly shifting center of gravity. Since Charles Center was the hub of renewal in the 1960s, the action has shifted many times—the new Convention Center, Harborplace, Harbor East, the stadiums and casino complex, Fells Point and Canton, to name a few, but all of it concentrated downtown and along the water.

All of which raises the question: Where’s Pugh? It’s easy to make excuses for Pugh, as she often does for herself. For example, legislative experience does not necessarily equip a person for administrative responsibility. But Pugh boasts an MBA, which should tally up bonus points for managerial decision-making for anyone in public office.

In an op-ed response last week to a critical Baltimore Sun piece, Pugh passed blame, without assuming responsibility, to everyone but herself for the drug crisis in Baltimore—The Sun for taking comments out of context, researchers, hospitals, citizens, developers and “challenging our city to do better by those who have drug problems.” Yes, it takes a village, but it also takes a leader.

The feckless mayor’s office has also set another precedent. Not in the memory of anyone alive in Baltimore has a mayor been rolled over by a City Council. It happened to Pugh with her own budget. The Council held firm and got its way. Those familiar with the inner-workings at City Hall say all the tough calls are routed to and made by James T. Smith Jr., the former Baltimore County Executive and Maryland Transportation Secretary, who is Pugh’s major domo and principal whisperer.

Pugh, a low-talking prattler, more often than not, has a way of passing on responsibility to the next level of government—“I will talk to the governor,” “I’ve written to the president,” “I’m meeting with our Congressional delegation” and “I’m going to talk to the city delegation to the General Assembly.”

Comparisons suck, to roughly paraphrase Shakespeare. But Pugh could take object lessons from her recent predecessors. William Donald Schaefer was kind of the maharaja of momentum as if motion creates substance. But the gimmick worked. Ditto Sheila Dixon, until her fall from grace. By contrast, Kurt Schmoke and Stephanie Rawlings-Blake were two passive peas in a pod, reluctant to engage with the public and content to direct the city from behind the battle lines instead of leading the charge. That standoffish attitude, bordering on arrogance, Pugh, should note, is what brought down Rawlings-Blake and gave Pugh the opening to become mayor. As John F. Kennedy observed, “The only abuse of power is having power and not using it.”