Made Anew in the Red Light 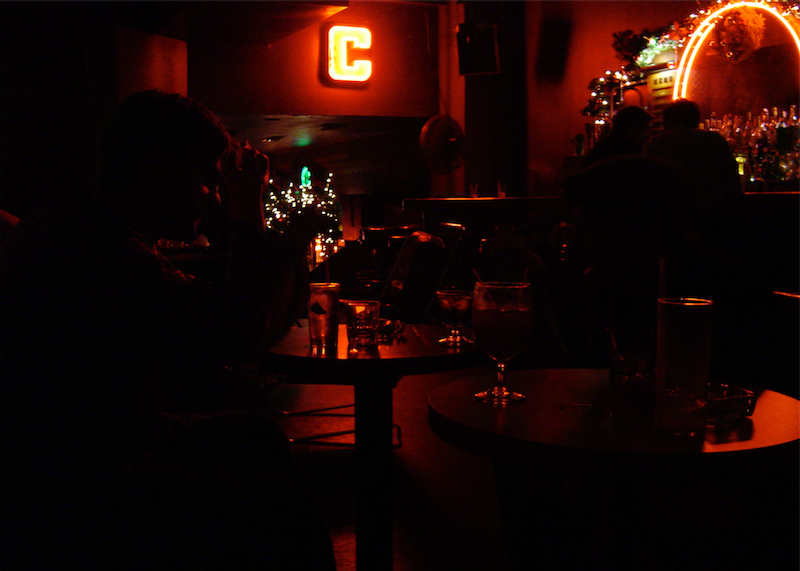 How do I feel about the closing of Baltimore’s cocktail hour cultural hub Club Charles? It’s the sensation of waking up groggily to the passage of time. City Paper’s disappearance is also impending. Baltimore is taking a hammer to the face before the tossing sands reveal new or overlooked treasures.

Club Charles is unique, never giving a crap about marketable themes. Halloween and Christmas decorations stay up and collect dust. Smaller figurines and artifacts on mirrored shelves catch your eye when you’re not preening in front of the big mirror or subtly eye-fucking someone waiting on a margarita. Hometown heroes and failing artists come to the wishing well inside the tastefully-lit red room, occupying worn stools and plastic seats that cling to your ass in the little cliquish nooks of the lower and upper decks. Being among the socially awkward, my crew and I pile in the murder closet whenever possible so that we can be real and engage in wordplay and half-drunken conversations not fit for the light of day. Once I played devil’s advocate and told a grad student how awesome North Korea and Kim Jong-un are. I regret that.

I once made the mistake of buying a bum a beer. The bartender yelled, “Don’t pull that shit again! Help him drink it and get him the fuck out of here. Do it again and you’re going with him!”

Fashion tests itself in the club. Bartenders don costumes. Actors come in after plays, sporting makeup and tailored garb. Comedy nights pop off next door and trapeze artists swing overhead. People dress vaudeville, art school, player, or plain dirty. Cross-dressers do a bang-up job and use bathrooms as wardrobes. People look nice for the most part. It was an outrage, however, when an unpopular someone wore sweatpants.

Patrons applaud the Art Deco. I admire the doughy Grecian figures painted on the walls. Club Charles is the most relaxed meetup on the section of Charles St. offering a movie theater, crêpes, hit-or-miss restaurants, a juice bar, goth bar, and Metro Gallery.

Bless Club Charles, that last bastion of cheap drinks in a city seeing the rise of $14 hand-crafted boozy snowballs. At Club Chuck remedies to the day’s ills are dealt by legendary bartenders who make friends with you over time unless you get weird or annoying. Conversant, dexterous cocktail waitresses and a smiley medicine man hold down the fort. They’re working artists, often cast or commissioned for things around town. Treat them nicely and tip big and you’ll get hookups. The bar is the closest you will get to Cheers but through that dirty Baltimore lens as if John Waters had consecrated the place by choking chickens in it.

Club Charles: a carnivalesque, decadent arts nest for a limited dating pool. Generation after generation gets roped in; the loyals remain. Veterans drink through storm and stress. I’ve seen a lone wolf turn into a playwright overnight, because somebody talked to someone. There’s a centrifugal force. Talent and creativity radiate out from the bar.

I love pseudo-intellectual wine nights on Sundays. My closest friends bring books and City Paper crossword puzzles. We butcher politics and drink red wine and champagne; we bitch about work and put on music (the B-52’s and Kate Bush). Once two of us pushed a friend to Club Charles in a shopping cart.

Come after holidays, tours, successes, or defeats. I get off the train and go there before everyone. Text friends to come up as you draw a comic or read poems. The jukebox has shifted from 1980s to '90s, with locals embedded in the mix. Bartenders give you money to put on 10 songs when it’s quiet.

Listen to the loudness late at night: glasses, shakers, speakers blistering; voices, some of which never went through puberty; listen to the art talk, movie talk, gossip, laments, dating advice, cattiness, boasts; politics and fucked up rants; stumbling drunkenness down the steps. “Last call!” the rough doorman screams in your ear. Something changes in the light.