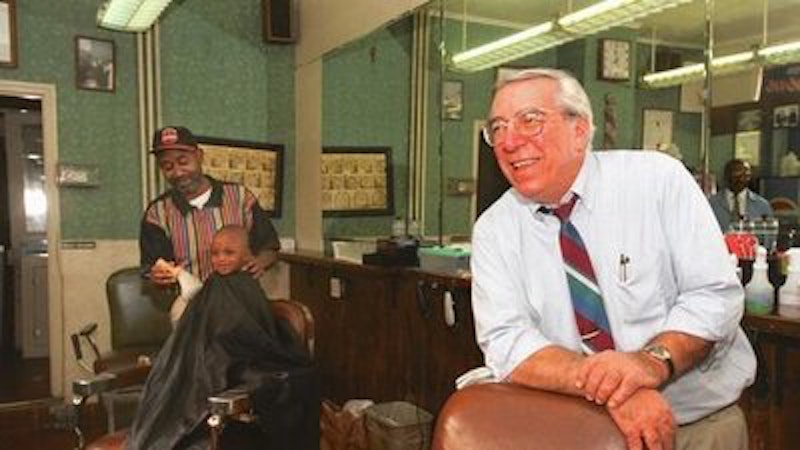 One by one and two by two they came, in all sizes, shapes, ages and manner of dress, to pay their respects to the barber’s barber, Simon V. “Cy” Avara. Cy died last week of cancer at 81 after a celebratory life of trimming the tresses of the great, the near great and those who lived in the shadows of the great.

Cy was more than a master barber and stylist who’s enshrined in the National Barber Museum and Hall of Fame in Winchester, Ohio. He was a social worker with a comb and scissors, a priest without a reversed collar, an old-school barber who learned and taught new grooming techniques and a South Baltimore precinct worker who could spot a bobtail ballot quicker than you can say walk-around money.

But behind all the praiseworthy palaver, Cy was a family man who believed that life was a simple proposition: You say your prayers, pay your taxes and try to be a good husband and father, all the while helping the less fortunate. Pope Francis would be pleased.

Cy operated two barber schools, one at 1500 W. Pratt St., in Baltimore, the other in Dundalk, neither in fashionable neighborhoods. But that was the point. The schools were Cy’s bread and butter, but they were also a storefront for his true calling as a missionary to the neighborhoods’ needy.

Barbering also involves a guy thing. A barber is an entrusted person in the tight little circle of guys, kind of like a bartender or a tailor, much in the same manner that a woman confides in her hairdresser. Cy, with a willing ear and a zipped mouth, knew enough secrets to send grown men to the gallows.

They and others kept Cy in supply of used clothing and other useful articles that Cy, in quiet cahoots with local Catholic nuns, would distribute to the needy in the neighborhoods. He also provided free haircuts to those around the Pratt St. school, Arava’s International Academy of Hair Design, who could not afford them.

The list of clients resembled an exclusive boy’s club. Every other Friday, and on Saturdays, when Cy cut hair, by appointment only or an occasional walk-on, the group would be there to swap stories and banter with a senator or two. And it was then that Cy took care of neighborhood business by enlisting his prestigious clients—to get a neighborhood kid a job, arrange Medicaid for a needy woman, straighten out a Social Security mess for someone, work out a disability claim, solicit free medical advice from the Hopkins doctor for a sickly student or to find out just what, it is fair to ask, is going on in Washington. Haircuts were, more often than not, interrupted mid-snip by a down-and-out neighbor who needed a helping hand.

Once a year, Cy sponsored a Cut-A-Thon to raise funds for abused children at the St. Vincent’s Center. He’d enlist barbers from around the area, many of them his former students, to provide free time and services and line up a list of celebrity athletes and politicians to attract customers. One year he invited President Bill Clinton. The cost of a haircut—a donation to the kids. And they gave generously. He also dispatched student barbers to the center to provide free haircuts for the children. Cy established a foundation to provide eye care and glasses for the children at the center.

Cy was also an early supporter of the Ed Bloch Courage Awards, a locally-originated program by a fellow barber and businessman, Sam Lamantia Jr., through which the National Football League participates in raising money at an annual dinner and auction fundraiser to help abused children through shelters they maintain nationwide.

The barber schools doubled as rehabilitation centers for the wayward as well, with Cy as the headmaster. Many of his students were ex-convicts of every creed, gender and color, who, through rehabilitation programs and Pell Grants, were learning the barbering trade under the master’s watchful eye. And when a poor neighborhood kid showed promise and genuine interest, tuition was waved to give the person an opportunity to break out of the cycle of poverty and life on the streets.

Cy led them in prayer before every class and at the end of each day, with a message that he hoped would eventually get through to the tough guys in the room. And when a corrective scolding was necessary, Cy delivered a dose of tough-love like a stern Italian head of the family. Cy turned lives around. And many of those who succeeded because of Cy were there last week to say goodbye and thank you. Cardin had Cy memorialized in the Congressional Record.

Born and raised in Pigtown, Cy got his political training in the trenches in the old Sixth District in South Baltimore. His mother, Mary Avara, a widow and bail bond woman, was aligned with the political faction of Julian “Chicken” Carrick, one of the district’s dominant political leaders in the 1950s and early 60s along with the Wyatt-Della organization and that of the upstart group aligned with William “Bip” Hodges.

Carrick was early among the three to endorse Gov. Millard J. Tawes (D) for reelection. Carrick collected on his winning bet by sponsoring Mary Avara for a patronage appointment. She was named head of the Maryland Censor Board—yes, the state did censor motion pictures in those days—and eventually Cy was designated by Tawes as chairman of the Maryland Board of Barbers (which his son Larry now chairs.) Cy was also simultaneously president of the state barbers’ union, a visual benefit to Tawes when it came time to display campaign signs in the state’s many barbershops.

In those posts, Cy became a presence in the State House to lobby on issues that affected the barbering trade (back then a nasty territorial rivalry between barbers and cosmetologists.) When Mandel became governor, Cy began showing up with his tools to keep Mandel in gubernatorial trim and his agenda on track.

On one occasion, in preparation for the state of the state message, Cy re-fashioned Mandel’s flat silvery hair into a new-look blow-dry pouf that he’d introduced to Baltimore as a Roffler-trained stylist in the European tradition. Mandel’s secretary did not approve. She dispatched a State Trooper to buy a bottle of Vitalis hair tonic (as it was called back in the day) to slick down Mandel’s newly heightened bouffant hairstyle.

Soon the word got out that Mandel appeared regularly on Saturdays at Cy’s Pratt St. school (on his way to political boss Irv Kovens’ nearby Baltimore St. emporium). The small private “styling room” that Cy reserved for his private customers was nicknamed “10 Downing Street” after the British prime minister’s London residence. And every Saturday morning the supplicants—judges, legislators, businessmen, neighborhood gawkers—would line up to plead their causes with Mandel while he was a captive audience in the barber’s chair.

Cy’s pride and joy was his family, his wife Rita and four children, Larry, Michael, Tom and Susan, and a slew of grandchildren. He counseled his students as well as his children to learn a trade—“people will always need a haircut”—and three of the four did to backstop their college degrees. Susan, Michael and Larry all learned barbering, though only Larry still practices as the succeeding owner of the Dundalk school. Larry inherited Cy’s book of clients when the Pratt St. school closed more than a year ago as Cy became too ill to run it. The building is now up for sale.

If anything surpassed Cy’s loved for his family it was his church. He attended mass daily at St. Joseph Roman Catholic Church in Cockeysville and often stayed afterward to recite the Rosary in a side chapel. And when he was eager to attend the papal mass at Camden Yards during Pope John Paul’s visit, a Jewish television executive scored tickets for him and Rita.

Cy moved on his own time, chronically late but always eventually there. As one regular client joked, “I know what time my appointment is, but I’m never sure what time Cy’s appointment is.” But with Cy, a haircut was never just a haircut. It was a joyful experience and a lesson in living and giving—and always with a smile.