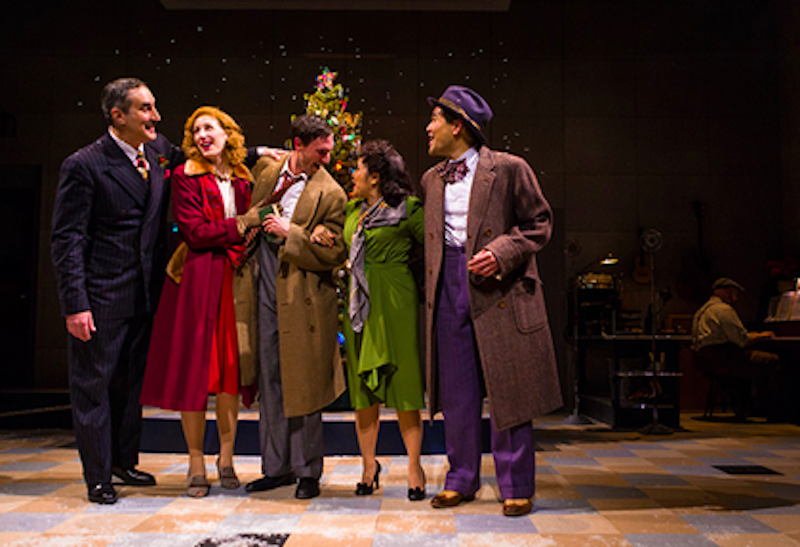 My favorite movie is the Frank Capra classic It’s a Wonderful Life. I’ve seen it at least once each year since childhood, and never get sick of it. No holiday season is complete without seeing the tale of George Bailey’s redemption, Mr. Potter’s warped, twisted nature and even the uber-cheesy “angel gets his wings” line. I’ve never seen the movie without shedding a tear or two.

This year I was thrilled to hear there was a live performance of It’s a Wonderful Life: A Live Radio Play at Center Stage in nearby Baltimore. I wondered how they’d cram a three-hour epic film onto a stage in under that amount of time. I feared there was no way to live up to the original, but was pleased at Joe Landry's adaptation.

The set is a simple 1940s-style radio show set featuring the local “WBAL” radio station letters. Old-fashioned standing microphones are set up onstage along with a sound booth where a very talented artist serves up realistic sound effects throughout the production. There is a radio show host, Freddie Filmore, who narrates the play.

The most incredible part of the production is the fact that a total of only five actors perform all the roles. Two women and three men (plus the sound guy) are somehow able, with only a few simple props or costume pieces, to successfully embody the many memorable, ageless characters of the timeless tale.

The Filmore character (Ken Krugman) also plays the roles of Potter, Uncle Billy, Nick the bartender and many others. The gifted actor brings humor, warmth and energy to the stage. The other actors do a fantastic job of spinning between characters as well, and Joseph McGranaghan does justice to Jimmy Stewart’s George Bailey, which couldn’t have been an easy task. Actor Pun Bandhu is great as Clarence the angel, and in some of the smaller character roles like the bar owner Martini. Actresses Chiara Motley and Eileen Rivera seamlessly integrate all the play’s female characters with aplomb.

It’s a busy show. There’s a lot of motion, which would keep it interesting for younger audiences. The actors’ constant movements make up for the stagnant radio show setting, and the live 40s commercials are a lot of fun. I’d have liked to have seen a little more audience participation, not completely Rocky Horror, but along those lines. The diehard fans in the audience know all the lines by heart. The only one I was sad was missing is when George Bailey runs around the town (after “getting his life back”) and yells “Merry Christmas Mr. Potter!” and Mr. Potter in the movie says “Happy New Year to you! In jail!” It’s a line my husband and I always quote, and we glanced at each other with a pair of raised eyebrows. Of course, it would be impossible to include every line in the three-hour film, so that’s merely an observation, not a criticism.

If you’re thinking of taking your family to see a live holiday performance this year, the Center Stage production of It’s a Wonderful Life: The Radio Play would be an inspired choice.