A Man Who Embraces Baltimore’s Spirit

A conversation with producer & DJ Schwarz. 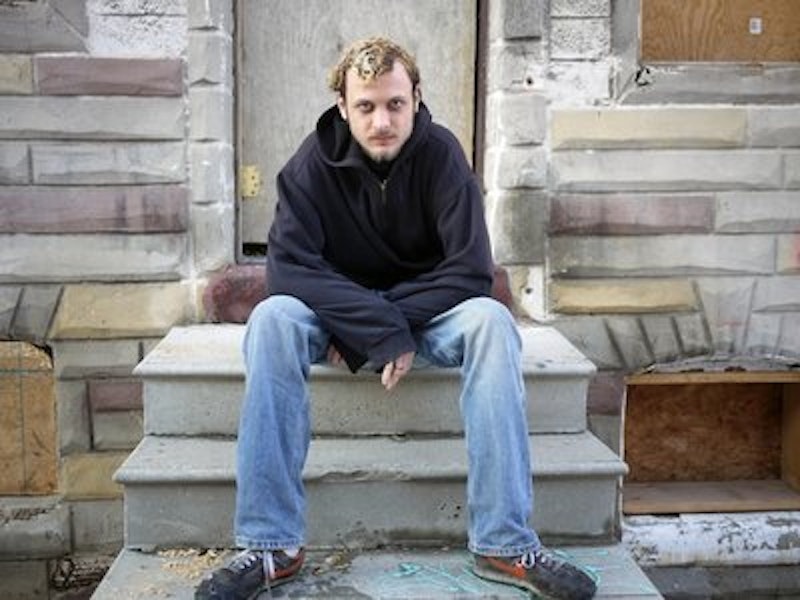 Producer and DJ Schwarz has been a staple of the underground Baltimore music scene since he moved here from St. Louis in 2008. To me, he’s essential, a perfect example of this city’s spirit and embrace of the unique over all else, especially whatever passing trend is cool at the moment. He takes sounds and styles that could never conceivably mix, and plays songs that DJs in more conservative or self-conscious cities wouldn’t touch, for fear of being misconstrued or heckled or yanked off stage by the neck with a cane. “When I came here… I felt like I was saved. I thought if I had stayed in St. Louis, I’d probably be delivering pizzas and doing drugs, so I had to get out.”

I’ll never forget the end of a dance party at the Copycat last year when Schwarz closed with Aerosmith’s “I Don’t Wanna Miss a Thing” from the Armageddon soundtrack. Somehow, all the words were stored in our heads, and the crowd converged toward the center of the floor, all arms raised and voices hoarse from shouting “CUZ I MISS YOU BABE, AND I DON’T WANNA MISS A THING!” Schwarz cut the song and everyone kept it going, even after the lights were turned on. Don’t over-exert yourself looking for layers of irony that aren’t there: this was a beautiful and spontaneous, a glorious sing-along to a piece of pop that we all shared, burned in the back of our brains.

Schwarz has just completed a trilogy of music videos for Juiceboxxx’s Thunderzone label, beginning with last year’s “U R BEAUTIFUL” and “TONIGHT’S THE NIGHT,” and concluding with last week’s release of “OPEN UP YR MIND,” shot and edited by Brooks Kossover. The theme of the trilogy is unabashed positivity and love, with Schwarz using his immediately recognizable and distinctive cupped mic growl to implore the audience to love yourself and love your body, to open up your mind and examine the world around you, and let it all in. “Genre bending posi-core” says one YouTube commenter, another: “stop yelling at me.” Schwarz’ aggressive tone and deadpan stare might seem at odds with his lyrics and the vast gumbo of sounds he uses, but that mix is what makes Schwarz a Baltimore star. “It’s still weird to people when you’re doing things that are so different. And a lot of times, I’m interested in taking things that are really different and then putting them on top of each other. That’s really interesting… it’s not arbitrary or random, but it could be easily seen that way. But it’s all really sincere.”

Schwarz’s broad taste and his chameleon abilities as an MC allow him to exist comfortably in multiple realms. Last week, he played at the Crown with underground legend B L A C K I E, experimental hardcore band Sexgender, rapper Abdu Ali, and R&B/trip-hop singer songwriter Richard Kennedy. On May 3, he’ll play the Paradox with NeNe Leakes, best known for her work on The Real Housewives of Atlanta. Every setting and audience and context is an opportunity, you just have to massage it right and feel the night. “Touring with Juiceboxxx and seeing him every night really engage the audience was really inspirational. Every night, no matter what, he is on like 200%, like a maniac, and he really knows how to draw people in.”

Growing up, Schwarz drew from the same array of influences and deep musical history without borders typical of our age. “When I was in kindergarten, there was one of those plastic cassette drawers, and on one side there was a lot of sort of classic rock, like the Beatles, Chuck Berry, Little Richard, Neil Young… and then on the other side was more pop rap of the time, like MC Hammer and Vanilla Ice. That was the stuff I was most into in elementary school, until fourth grade when I got really into Blues Traveler. The first music I was really into that I’d still listen to was like, Nirvana/Smashing Pumpkins grunge stuff.” Did you outgrow any of that music, so to speak? “I think when you’re a small kid, everything is just everything, you know? But there was a night that I spent recently thinking about Vanilla Ice [laughs]. I used to love Vanilla Ice when I was in kindergarten, but it’s not something I would be like ‘yeah I like that’ now.”

As a kid and a young teenager, he’d make mix tapes, miming characters or voices in between songs. “Recording was really important to me. I would tape myself shredding guitar solos. I felt like I needed to record whatever I was practicing, and I think a lot of people did that, and still do.”

“I wonder how much people curate their likes to fit into certain things. Because I think that’s a lot of it, people curating things to create an identity. Maybe artists like Avril Lavigne, or Miley Cyrus, or Evanescence aren’t part of my ‘underground cultural identity,’ but I do love that stuff, even if I’m not a part of that culture, which I’m not even sure is a culture because it’s so mainstream. With a lot of people, taste is like a fashion aesthetic, and what you like has to fit into a certain mold. I think I like to push people, in the opposite direction, to keep them interested and get their attention. Like I might tailor a night to be a certain way, and then slip one odd thing in there just to see what the reaction is like. Like some contemporary country.”

When Schwarz talks about partying and celebration, he’s vague regarding drugs and alcohol, though he’s not straight edge. The joy that Schwarz promotes in his music is sustainable and healthy and meant to be taken at face value. This no doubt sets off the alarms of people looking for an angle, a twisted joke undermining his aggressive positivity. There is none. I ask him if he ever worries about his message being misunderstood by people who drive their heads into the sand getting fucked up into oblivion, but it’s not something he can control. “I don’t think that people are doing any more drugs than before… I think [legalizing drugs] would save a lot of lives, because it would be regulated. A lot of the times when people overdose, it’s because they’re getting it from different people, and they don’t know how strong it is.”

“Alcohol makes so much more money than live music. Even if the door makes $500, the bar will make a grand at least. People aren’t going to want to dance if they’re not drinking.” Schwarz briefly thought about doing an all-ages show, but: “I’m not interested anymore really in trying to do alcohol free events. In some other universe, maybe. But I've just accepted the fact that that idea is kinda absurd.” In a world that’s fucked up, volatile, dangerous, and nothing if not uncertain, “I think partying and catharsis and release are even more important when things are bad. People need to feel that release.”

I asked where that urge to subvert and challenge people comes from: pain? Disgust or disappointment? Far from it: “I just want to make people feel something.”