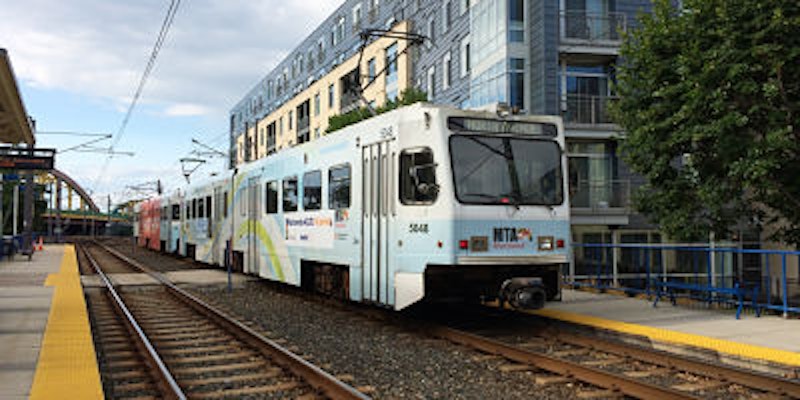 One of Spiro Agnew’s first actions upon assuming Maryland’s governorship in 1967 was to instruct his state roads commissioner-designate, Jerome B. Wolff, to deep-six Baltimore’s proposed East-West Expressway that would have demolished neighborhoods in its cross-town path.

Agnew conveyed the impression that he favored mass transit but his preference carried a high price and a wily purpose. His transportation planners devised a system that ran on rubber tires, and not steel wheels. The catch: the only rubber-tire transit system in existence was manufactured by Westinghouse, then in Linthicum, which was managed by a friend and supporter of his. Read into that what you will. (See footnote.)

Marvin Mandel, successor to Agnew who left Annapolis to become vice president, eventually jettisoned rubber tires and reverted to steel wheels for the round-about rail system that now shuttles Baltimore area residents. But the contracts to build the Baltimore Metro system caused a ruckus and Mandel was accused by his transportation secretary, Harry R. Hughes, of “tainting the process.” Hughes resigned in protest and eventually ran for governor—“a lost ball in tall grass” is how Sen. Harry “Softshoes” McGuirk described Hughes’ candidacy—and won.

McGuirk helped contribute to the contract fuss as well, insisting that the construction management end of the subway deal—the most lucrative part of the contract for doing very little—should go to Victor Frenkil, of Baltimore Contractors, the home-boy hustler with national connections. Racial considerations blocked expansion of the subway’s plans to include a line linking downtown with central Baltimore County and another southerly route into Anne Arundel County. Three governors and a dozen years later, William Donald Schaefer added the light rail link between Hunt Valley and the ballyard neighborhoods, adding another track to the disjointed system.

The existing subway system, as well as any future mass transit network, was a generous gift to the building trades unions for their allegiance and financial support of Democratic candidates and campaigns. The unions’ Democratic supporters, and those who favor rails over roads, are now diminished in the General Assembly nor do they have a union-made governor in the State House.

Comes now Republican Gov. Larry Hogan, nearly a half century later, left to decide, once again, the best method for getting people across town—in rail cars or in automobiles or even if at all. Put another way, whether to move cars or people. Still more important is whether the fare box will support a new $3 billion line in a city that’s losing population and jobs but adds another Tinker Toy to the municipal assortment. The fare box is crucial to transportation bonding.

Hogan has left no doubt that he prefers roads over rail, siding with rural areas that resent funding urban projects at the expense of county roads and highways. But in his initial budget, Hogan has left funds intact while he decides whether to proceed with mass transit, an indication, perhaps, of the competing pressures he is under over the future of the system. But to the dismay of county governments, Hogan failed to restore highway funds as he had promised during his campaign.

The imaginary line from east to west across the city that has engaged and infuriated Baltimoreans for half a century was seared across the map by an out-of-towner who had little interest in the city but would bulldoze any property in his way to stake a claim and enlarge his asphalt empire.

In 1949, the city fathers invited New York’s master planner, Robert Moses, to come to Baltimore and advise them on how to improve the city’s physical assets. Moses looked at a map of Baltimore and said: “This is ridiculous. You should have a highway that goes from here to there” as he scratched a Magic Marker line across the map linking west to east. That line has divided Baltimoreans ever since. At the same time, Mayor Thomas J. D’Alesandro Jr. (Old Tommy) was digging up trolley tracks to clear the streets for automobiles, as other cities had done at the behest of Detroit. One generation’s nuisance is another’s regret.

The Moses line became the route of the East-West Expressway. When the plan was revealed, the proposal pitted neighborhood against neighborhood and family against family for the disruption it would cause, a vociferous civic standoff that lasted nearly 20 years. Moses, it should be noted, was infamous for uprooting residential neighborhoods for highways and parks and disproportionately displacing the poor in their bulldozed path. Eventually he was stopped and stripped of his authority by New York Gov. Nelson Rockefeller (R).

And now the approximate East-West route is reborn as the Red Line, a proposed over-and-underground mass transit route from Woodlawn to the Johns Hopkins Hospital Bayview Campus, traveling east through the gentrified neighborhood of Canton where opposition from neighborhood associations is fierce. In that area, the transit line would run above ground and limit vehicle access on Boston St. The idea, to be sure, is to shuttle westerly folks to the east and not the reverse.

Opposition to the original proposed East-West Expressway launched the political career of Sen. Barbara Mikulski (D), who, back then as a social worker and community activist, argued and demonstrated against the upheaval of the Fells Point neighborhood where she lived before it was resuscitated as a youthful bar-hopping nighttime playground. Mikulski now lives barricaded in a N. Charles St. condominium after being mugged in her old Polish waterside neighborhood.

Last year, as one of her final acts as outgoing chair of the Senate Appropriations Committee, Mikulski made certain that $900 million was tucked into the federal budget to pay solely for the tunnel through downtown Baltimore. Ballooning costs of the Red Line have soared to $3 billion from its original price of under $2 billion, cost overruns sure to come but not factored in.

In addition to the $900 million in federal funds, the state has pledged $1 billion, Baltimore County has reluctantly promised $50 million even though Executive Kevin Kamenetz is opposed to participating and Baltimore City has pledged $200 million in in-kind contributions but not cash. The actual numbers do not compute to the system’s cost and no one has explained where the additional funds will come from.

There are those, too, who question the actual planning of the system because the parts don’t mesh properly and the lines do not connect efficiently. One objection is the tunnel through downtown Baltimore, which would parallel the existing subway tunnel, and another is the planned nexus center at Lexington Market where all the parts are supposed to intersect. An alternative suggestion would be a major mass transportation hub at the Rogers Ave. station which would be a more efficient use of existing facilities and eliminate unnecessary spending on a big dig through the city’s underbelly.

But the millennials, who love city life and may be Baltimore’s population of the future, prefer walking, cycling and public transportation over the ubiquitous automobile. The popularity of the city’s Circulator is testimony. And as a merit badge of modern life, young people prefer to live, work and play in the same general neighborhood not only as a matter of convenience but also of public health. Walking or riding an electrified train or trolley does not produce ambient contaminants.

As his valedictory, the outgoing transportation secretary, Jim Smith, cited in an op-ed for The Sun the usual arguments for proceeding with the Red Line—jobs, economic development and available public funding. “The Red Line is a game changer for Baltimore,” Smith wrote, “and a project we cannot afford to walk away from when we are standing at the finish line.” Yes, and it’s taken 64 years to get there and still nobody’s figured out how to pay for it.

—Author’s note: Spiro T. Agnew was forced to resign the vice presidency after admitting to accepting bribes and kickbacks from architects and engineers as governor of Maryland and as vice president following a Justice Department investigation. Jerome B. Wolff, Agnew’s roads commissioner, kept a detailed diary of the bribes and kickbacks and was a confessed co-conspirator in the scheme he helped to arrange.