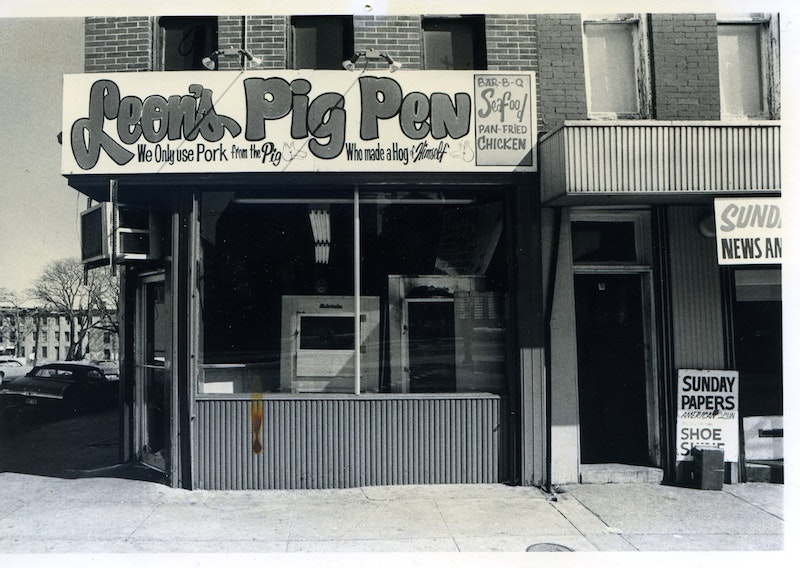 There was a time in Baltimore when a resident or clued-in tourist would look forward to frequenting a local institution that was peculiar to this city. I thought about that the other day while driving down Greenmount Ave., and passing North Ave., where not so long ago—at least in middle-aged years—Leon’s Pig Pen was a bright spot in that blighted and neglected stretch of concrete. One by one, across the country, independent eateries and retailers go bust, and it’s sort of like reading the obituary pages (when people still read newspapers) to be assaulted by bad news. Leon Speights’ mini-chain went out of business a couple of decades ago, and I’d be hard-pressed to recommend another spot in the city to get a plate of expertly prepared ribs. Some fancy restaurants do a decent job—I’m thinking of Mt. Washington’s Ethel & Ramone’s or the Prime Rib—but not on the level, or price, of Leon’s.

Sure, I’ve had superior ribs and BBQ, in New Orleans, Houston and Macon, to name just a few, but not on the East Coast. When visiting my brother Doug at Johns Hopkins in the late-1960s, he’d take me to three of his favorite places for carry-out: Sterling’s seafood shack in Remington (still in operation), Jack’s Deli in East Baltimore, and Leon’s. In fact, he was returning from Jack’s on April 4, 1968 when the riots broke out in Baltimore following the assassination of Martin Luther King, Jr. He lucked out: although a brick was thrown through his window, it missed his face and he got back home physically, if not mentally, unscathed.

When Baltimore’s City Paper, which I edited and co-published, was situated in Charles Village, on occasion colleagues and I would walk down to Leon’s at Greenmount & North for a hearty lunch. One time, accustomed to not wearing shoes in the office—different era, thanks—I forgot to slip on my sneakers and made the trek to Leon’s bare-footed, a foolish lapse since I returned with about a dozen cuts from the all the broken glass on the sidewalks. I wouldn’t say that the beef or pork at Leon’s “fell off the bone,” as the inevitable description of prized ribs goes, but doused with hot or sweet sauce, depending on your mood, that meat would simply slide down your throat. I never quite understood why customers would order chicken leg sandwiches—a leg & thigh between two slices of white bread—since in my reasoning, at least, it wouldn’t make for a smooth eating experience, having to pause to negotiate the bones, but Leon’s bbq chicken was tops as well.

Another time, in the spring of 1980, City Paper sponsored (under the auspices of the Maryland Writer’s Council, as I recall; the star of that organization back then was Andrei Codrescu, who proclaimed grandly that Baltimore’s poetry scene rivaled that of San Francisco in the late-1950s) a day-long event called “The Ronald Reagan Laugh-In Festival,” where old Reagan movies played continuously, t-shirts were sold, Reagan quizzes were administered with prizes going to the winner, and cans of National Boh were sold for 50 cents. The idea, not surprisingly in April of that year, was that Reagan was a joke who had no chance against even the feckless Jimmy Carter. It was a brainstorm of my longtime friend Ken Sokolow, who wrote for the paper under the pseudonym James G. Burns, and we made a relative killing when day was done.

A bunch of us squandered about half the unexpected proceeds at Little Italy’s Sabatino’s—my CP partner Alan Hirsch, currently co-owner of the Donna’s chain, giddily ordered round after round of clams casino—and when that long, boozy affair was over, the staff’s troublemaker Peter Koper (a terrific fellow who was a classmate of my brother’s) took associate editor Phyllis Orrick and me on a joyride at about one a.m. Destination unknown, as Peter sped through the deserted Baltimore streets and we wound up in the legendary political kingmaker Little Willie Adams’ West Baltimore neighborhood, not the best early morning location for three palefaces in a very dangerous part of town.

Anyway, we stopped at the Leon’s on Pennsylvania Ave., got ribs and chicken to go after it was implied that sitting down wasn’t in our best interest, and continued to cruise around the city, chucking beer cans out the window. I got home around three a.m., bouncing off the walls of my Mt. Vernon apartment, and got to work several hours later mildly worse for wear. Peter gave me a call that afternoon, cackling, and said, "Hey, man, that was fun, up for it again later tonight?" I passed, but still remember smacking my lips while polishing off a paper tray of Leon’s ribs.
I don’t think it’s too controversial to suggest that an evening spent at an Olive Garden or Chipotle’s (the anodyne Tex-Mex chain that claims their tasteless food is “made with integrity”) would offer the same menu of mischievous and uproarious possibilities. I’d include a video here of that night back in 1980… but, well, let’s just cut it off here, since an apple at that time was still a piece of fruit that was particularly prime in the autumns of the Northeast.