Hampden Throws a Wrench Into the Generic Street Fair 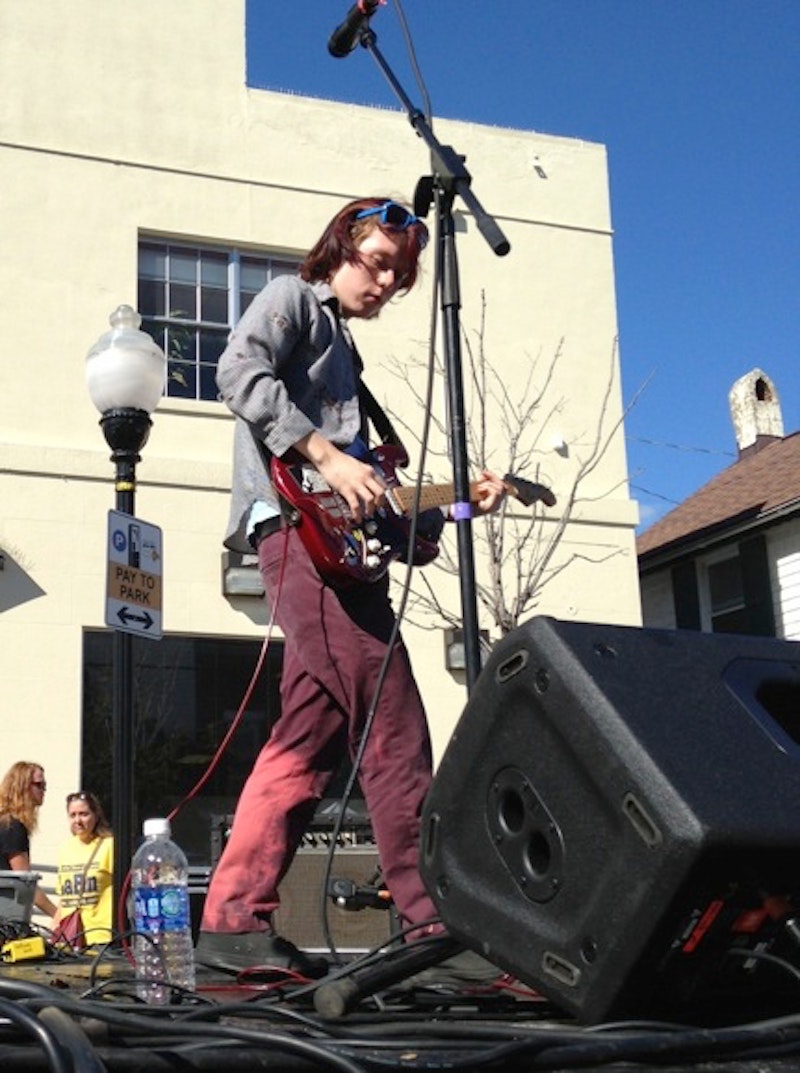 September city street fairs are particularly hum-drum affairs, wheeling out the same vendors, entertainment and mixed assortment of lackadaisical residents that are familiar from the last round of block-parties that began in May. You didn’t buy that string of Indian beads the weekend of Mother’s Day, and certainly won’t after Labor Day. Nevertheless, there’s still a lure to attend, at least if it’s a temperate day, depending upon your age: young couples stroll hand-in-hand, oblivious to everyone around them; teens and college students get snockered on beer, horse around and watch bands; parents line up at face-painting booths to treat their progeny to a temporary new look; and the middle-aged might run into people they know and yak about sports or local taxes. The tradition may be innocuous, but it’s part of a city’s culture and nothing to get overly cranky about.

Last weekend, my wife, younger son Booker and I attended Baltimore’s Hampdenfest—our other son Nicky (pictured above), the lead guitarist in the band Raindeer, was set to play at three o’clock—and as would be expected in this odd neighborhood, one foot in the 1960s, one in the present, there was the occasional strange vibe that tickled me. Parking was impossible, and after circling the side streets off the main drag of W. 36th St. (“The Avenue”), we disobeyed the “customers only” sign at a CVS not far away and proceeded to the fair. Melissa was fearful that our station wagon would get towed for such an infraction, but Booker and I waved her off, taking the attitude that even though Baltimore’s cops are more energetic in issuing revenue-producing tickets than apprehending bad guys, it was extremely unlikely they’d want to get snarled in a traffic jam. Fortunately, we were correct. Who needed a rolling pin when we got home?

Anyway, walking along Falls Rd., past the modest rowhouses that years ago featured prominent “George Wallace For President” posters, I noticed a charming idiosyncrasy certainly peculiar to this part of town. Elderly ladies, house after house, set up card-tables with a few trinkets for sale—some crusty costume jewelry, old record albums, Christmas decorations—sitting in mesh lawn chairs that were probably bought at a Sears in 1957, and at one stop there was a sign that read, “Cold Water.” That’s standard, but this woman was charging a single dollar for a 12 oz. bottle of Deer Park, and I found that remarkable, not only because at ballparks, the Inner Harbor and other vendor stands the going rate for water is borderline larcenous, but also because she wasn’t obnoxiously hawking her limited fare.

Really, even at standard convenience stores or bodegas, how often do you see bottled water selling for just a buck? If we were weren’t in a hurry—five minutes till showtime—I’d have bought a bottle just out of appreciation for her variation on the nickel lemonade stands that faded out when Norman Rockwell and Beatles wigs did, and chatted her up, but the moment passed and we moved along, onto W. 36th St. that was, at least to my eye, dominated by Funnel Cake carts and the vaguely nauseating frying oil odor that was in the air. It’s a good thing that almost no one reads The Baltimore Sun’s dismal weekly, b, or Hampdenfest would’ve been empty. From the Sept. 11 edition: “The toilet bowl races alone are enough to ensure we’ll be there; the mac and cheese contest is just icing on the cake.” A 21-year-old re-writing a press release, undoubtedly, but Christ… no, I can’t go on, it’s bad for your health, they say.

Raindeer was playing on a platform in front of the Tex-Mex restaurant Holy Frijoles, a jumping Hampden institution whose popularity completely eludes me. I like Mexican food a lot, and we’ve been to Holy Frijoles more than a dozen times, but their grub is really lousy, even by abysmal East Coast standards. Back in the mid-1980s, the Bill Struever-era Baltimore did have an excellent Mexican restaurant, El Charro in Brown’s Arcade on Charles St., but it closed after a year or two since the demand at the time in this city just wasn’t there for upscale cuisine. No snottiness intended, but the restaurants or cafes with character and good food had a short half-life then—I’m thinking of Louie’s Café, Uncle Charlie’s Bistro, Pacifica, Tony Cheng’s and Uncle Lee’s in particular—and now that chains have wiped out most independent establishments, it’s probably worse.

As Raindeer began their half-hour set—City Paper critic Michael Shank has favorably described the band’s music as a “space-age lounge act,” with “dashes” of Elvis Costello, Ariel Pink and Buddy Holly, and if you can figure that out you’ve been reading rock reviews longer than me, which is pretty hard to do—there was an appreciative audience whooping and cheering, most of them simultaneously texting on their cells. (Have to admit that between songs, I was checking out the Sox/Yanks game on my own phone.) Booker, who hasn’t quite gone Euell Gibbons on me, is nonetheless nutritionally conscious, eschewing soda, any bread but whole wheat, making his own smoothies and disdainful of double-cheese Whoppers, and had a devil of a time finding something for lunch that met his standards. Hampden’s not really conducive to such vittles, so he broke down and gnawed on a meat kabob, or, as we called such dicey street food back in Manhattan, “rat on a stick.” He survived.

It was chilly, in a Van Morrison “Wild Night” autumn sort of way, and I suspect the plastic and real pumpkins will soon—probably next week, just ahead of the Christmas displays that are really splendid in this neighborhood—dot The Avenue. If burning leaves in the gutters wasn’t now a crime, I’d return in mid-October for a visit, but as it is, my next occasion to frequent Hampden will be in December, going to my favorite “junque” store to purchase three or four “made in Japan” figurines.