Beatniks in Baltimore and My First Band 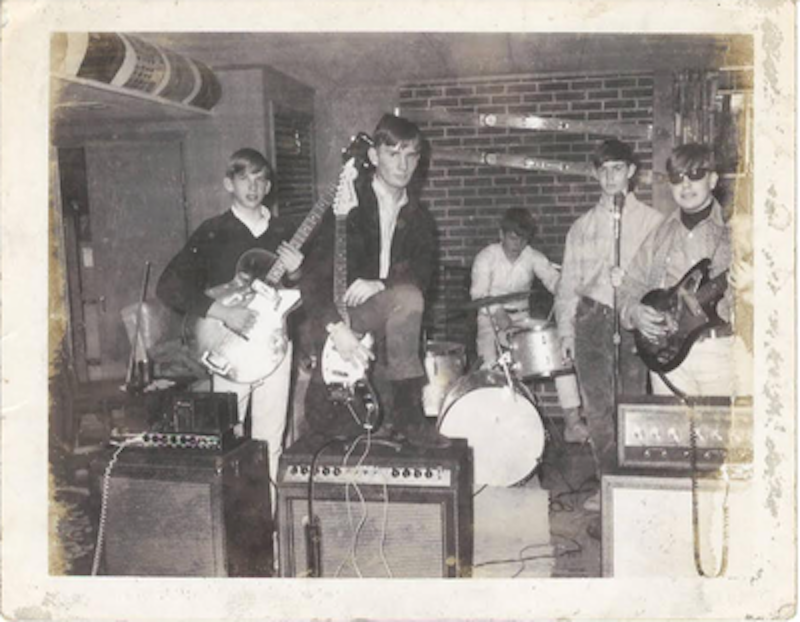 My trip to Europe as a 12-year-old in 1962 opened my eyes to similar internationalist countercultural shifts in America that I hadn’t noticed before. Believing the 1950s hype, I thought America was absolutely the greatest country. It was freer. It had the best cars, music, food, bathrooms, religions, and bread. I noticed counter-cultural stuff that I really liked, like Mad magazine. I noticed folk singers and beatniks were in the news—even in Baltimore. Peter, Paul and Mary, Joan Baez and Bob Dylan injected social critique and existential questions into the new basement coffee shops—home to bearded poets and abstract art.

The establishment did its best to discourage this new direction, so did the mean teens—the jocks in repp ties. Squads of young Donald Trumps trampled on the new looks, sounds and attitudes that challenged America’s old class lines. They loved racism and the sexist WASPY money culture, and fought to keep it.

I discovered a Baltimore children’s TV show called Patches, which featured a young guitar-playing folk singer (Jarrett Lickle) who supposedly lived in a shack out in the woods of Sparks, Maryland. He was a rebel. His hair was long and frizzy, and sported a rebellious beatnik goatee and mustache (the only Baltimore media personality to have hair on his face!).

Patches’ costume was old overalls covered with colorful patches, sent in by kids. He lived with two friendly collies and played his nylon string folk guitar, sang and talked to the camera. He had none of the silliness of Captain Kangaroo, Bozo the Clown, and other late-1950s kiddie show hosts. He echoed the emerging /beatnik folk singer movement, and a happier, more relaxed Maynard G. Krebs.

Patches’ influence on restless proto-beatnik Baltimore pre-teens was huge. Gone was the clean Tab Hunter look. Patches’ shows played 11 times a week on the leading station, WJZ. In 1962, he and his wife, Liz, opened a folkie basement coffee shop just north of Towson called “Patches 15 Below,” to continue serving his pre-teen audience into their alienated teenage years. He brought then-unknown folkies like John Denver, Emmylou Harris, and Don McLean to Towson.

Inspired by Patches, I asked my parents for a folk guitar and pay for lessons. My father insisted he take me to “Patches’ 15 Below” first, to “see what beatniks actually looked like,” thinking their sloppy look would turn me off. Didn’t work. By the way, Jarrett was born and raised in Towson.  Many thousands of Baltimore 60s hipsters owe him a great debt as an alternative to the mainstream hair-hopper-segregationist rock ‘n’ roll dance party, The Buddy Deane Show (of Hairspray fame).

In 1964, after the Beatles came to America, suddenly, new and different was hip—new music, new clothes, new haircuts, and a new sense of openness and acceptance of differences. Not that everybody bought it. This was the beginning of the big American culture split that continues today. The first major battle happened in 1966, when the angry right finally had something to be rabidly enraged about—John Lennon’s ironic comment that the Beatles were more popular than Jesus. From then on, hate was in. It was us vs. them, and hip vs. straight. A big part of America is always spoiling for a fight, and the foreign, weird and god-insulting Beatles were that solidified their anti-everything movement.

It got around to my junior high school friends that I’d bought a guitar. It made me a little part of the in-crowd. One day, Pat Riley, a kid from the neighborhood, came up to me and said he was a drummer. Since I had a guitar, would I like to start a band with him? He only had a snare drum and a cymbal, but had big dreams to have a fully-equipped rock band that played shows every weekend. We needed a few more players, and better equipment, but that would come.

It was new ground to me, but he was a real rocker. He listened to Top-40 radio all the time, but my music background was mostly classical. The lovesick moans of Elvis, or the noisy, beat-driven Buddy Holly didn’t grab my interest. That music was for older teens, so I didn’t pay attention. My friends up to that time were mostly into fishing, hiking, bb guns, and campfires, not pop music on the radio. I remember at my first guitar lesson, the teacher asked what kind of music I liked. At 13, I didn’t even know what types of music there were, besides classical or the 1940s-era big bands of my parents. I knew nothing of jazz or blues. When he said, “Rock”? I said yeah, yeah, rock, though I didn’t own a single 45, and hadn’t heard many 20th-century musicians besides Elvis, Ricky Nelson, and Chubby Checker’s scandalous “Twist” records (which I did like).