My Friend the Antiques Thief 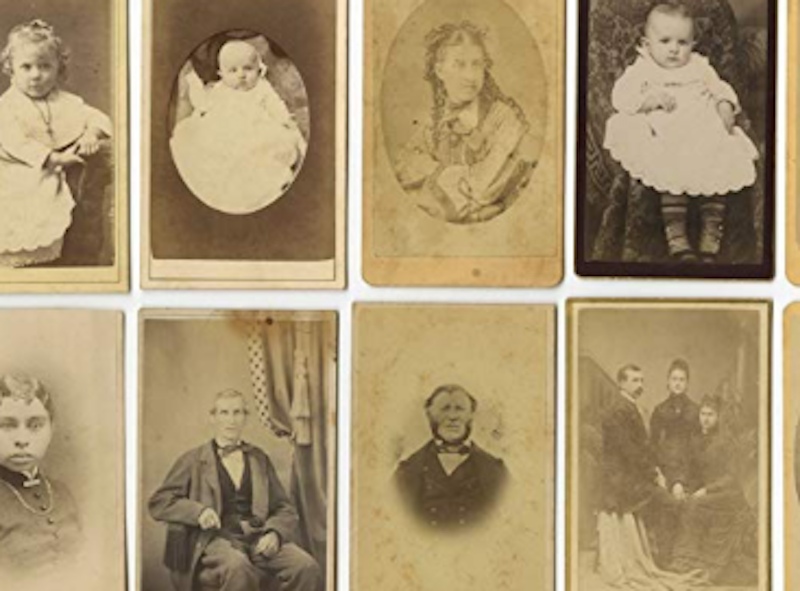 Eric’s obsession with antiquities and history was harmless, except that he became hooked on acquiring artifacts—like he eventually did with drugs. When we went into rural antique shops, he’d scope out the place for valuable items like daguerreotypes of Confederate soldiers, and slip them into his pockets. Because they were printed on glass, they were fragile, and could shatter easily, though the microscopic layer of silver that created the image is timeless, and has more detail than the most modern digital images.

Eric especially liked Carte de Visites, which replaced daguerreotypes. They were small photo portraits on paper glued to thin cardboard that were cheap, like business cards that could be given to friends and new acquaintances. They could be mass produced, so affordable by a much larger slice of the population. This made for much more variety of photos.

Daguerreotypes, because they were more expensive to create and care for, were formal portraits of successful men and their families, who had the money to have them made. They were precious objects in decorative leather lockets, which were almost magical talismans for families.

Just about anyone could afford Cartes de Visites. They existed in the millions, like elementary school children’s annual photographs. However, rare subjects were valuable. African-Americans, who were mostly slaves with no money, couldn’t afford personal photos, and therefore are among the rarest.  Additional highly collectable CDVs include pets, babies, people in uniforms, or posing with mechanical contraptions (toys, prams, violins).

Real oddities like men with eight-foot beards, people in coffins, hangings, or people with a deformities, and pets came in close behind in value. Rooting through these artifacts with Eric provided me with an insight into history, and also increased my interest in photography. Most of the people I’d known up to then were white-bread conformists who cared only about sports, clothing fads, cars, and top-40 music. They collected model cars and nudie playing cards.

Eric cared passionately about old Americana music, and gave me an introduction to authentic black blues. He collected 78-rpm records by black musicians, and had an astounding knowledge of Blues—a music I never knew existed. He delighted in playing records from the 1930s and 40s for his friends, especially Bessie Smith, Screamin’ Jay Hawkins, Huddy Ledbetter, and others that no one else in Towson had heard of. It was our private music appreciation club. He had sheet music, and taught us the extremely counter-cultural Civil War song “Jubilo,” where the plantation slaves take over their master’s mansion after he flees the advancing Union army.

We’d roar this song, rebels to the core, while high on pot, in the middle of the Towson Plaza shopping center, or occasions where we felt white establishment suburbanites needed scolding—which was all the time. Our blues backgrounds as 12-year-olds led to listening to the new generation of white blues players, like Paul Butterfield, Eric Clapton, and John Mayall. With Eric’s encouragement, a few friends and I started a blues-only garage band that played teen centers and college frats around Baltimore for a couple of years. Most people didn’t like our music, and would shout, “Play the Beatles” or “Play some soul,” which we declined, and so were rarely asked back.

I’m not sure exactly when Eric became a famous antiquities thief. He’d accomplished that several years before I had met him. I never took notes at the time, or that many pictures. I don’t have a single photo of him. As well-known and connected as he was in Towson, he doesn’t seem to have an online presence. An old Towson friend said he had may have married and moved to Baltimore City, and then died. But that’s all I could find. None of us left trails then. Posterity, legacy, or getting old were the last things on our minds.

Eric was born in Towson around 1950. He had a brother, Kerry, about three years younger, who had different interests and thought his brother was a mean kook. Eric’s nickname for him was Dumbo, and not because of his big ears. They were from an older Towson family, with roots in 19th-century politics. They lived in a modest neighborhood of creaky Victorian houses on Willow Ave. (now a row of 1990s blocky townhouses), where many of the homes dated from the 1860s. It had lots of gingerbread, front and rear stairs, a sizable backyard… probably for a cow or a horse.

The house was comically tilted, had fireplaces in most rooms, and a saggy front porch. The upstairs was the domain of the two teenage boys. It had two bedrooms and a bath. It also had a very large junk room with large windows on three sides. Eric explained it was his grandmother’s sewing shop where local women made dresses to sell at the turn of the century. It was his junk room for 78rpm records, newspapers, magazines, books, extra clothes, and mysterious boxes that held his collectibles.

Eric’s father, Chub Davis, was in his 50s and a part-time house painter—like many of his age. He was overweight, and mostly seemed to sit in a living room chair watching the Baltimore Colts on TV by himself, or passed out snoring following an afternoon of boozing in one of Towson’s bars, mostly the dark and sleazy Kent Lounge on York Rd., where underage teens could be slipped a six-pack of National Boh out the back door. Eric explained his dad was a no-account alcoholic, and paid no attention to him, except to poke fun at him. When we walked past him, Chub would sometimes unintelligibly grumble at us, which we thought was one of the funniest things ever.

If the front living room was the forbidden domain of Chub, the back kitchen was for Eric’s mother. She was the only wage-earner, working in the Baltimore County Sheriff’s Office. An easy lifetime government job granted to her by one of the old Towson families.  Her passion was oil painting, and she happily spent her non-working time there with a cigarette and paintbrush in one hand and a glass of wine in the other. She wore a long muumuu to cover her oversize figure, fluffy bedroom slippers, and bright red lipstick. She was the first bohemian artist I’d ever met, and thought she was the best. She was very kind, and had a counter of favorite help-yourself junk foods: chocolate iced cookies from Berger’s, bags of cheese curls, and big jars of peanuts. I never saw her cook anything or wash dishes. Above all, she was delighted that we artistic young teens were enjoying our teenage years so much.