In typical Baltimore style, he didn’t give a fuck, and relished the attention. 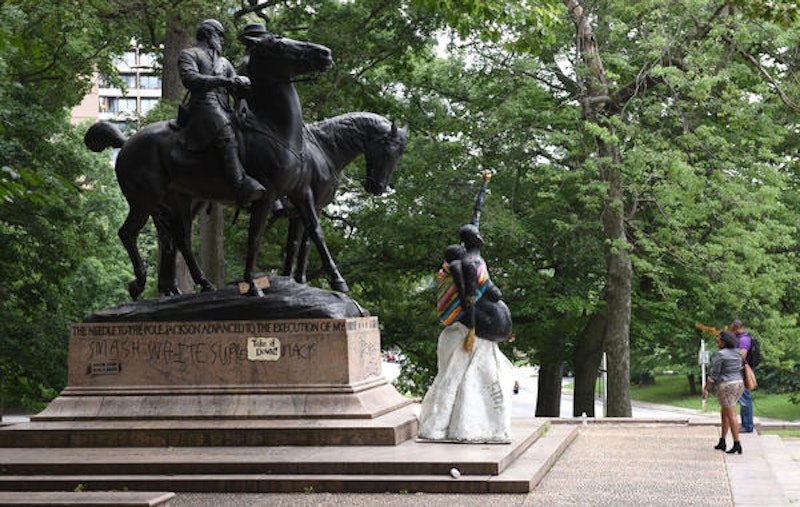 My best teen friend became a famous antiquities thief—at 11. Chased by the FBI, stories in The New York Times. He may have been the most famous person in Towson, Maryland before Spiro T. Agnew and Divine. Eric Davis was considered an odd duck as a sixth grader at Towsontowne Elementary School.

In 1965, the boomer teens in Towson were caught up in the world of 1960s new wave: Bob Dylan, Beatles, Beatniks, peace signs, garage bands, Communists, and Jack Kerouac. It was long hair, denim everything, hanging out at head shops, copping and smoking a little grass, then over to Read’s Drug Store for milkshakes and hamburgers while giggling at the straight suburbanites in the dinette.

Eric was a “bold” boy in his youth, and quickly grew into a non-conformist pre-teen, then a full-blown hippie. The common assumption at the time was that he had a personality disorder. But to me, he was the most interesting human being I’d met. He was Towson’s notorious long-haired hippie Tambourine Man, a shameless overweight nerd who studied everything, and didn’t give a fuck about what anyone thought of him—except a few close friends.  After meeting him, I decided to ignore just about everything my parents had warned me against, and followed him instead.

Eric was notorious for being the first to try shoulder-length hair. He preferred California cowboy hippie clothes—fringed leather jacket, leather boots, shoulder bag, and later an ornate neon turquoise long jacket a la Sgt. Pepper’s—made by his girlfriend. He turned heads everywhere. Even the reddest of the local rednecks were stunned into silence when they saw him. But in typical Baltimore style, he didn’t give a fuck, and relished the attention.

At the same time, but pretty much unknown to us, John Waters, Divine and the other Dreamlanders were making grainy super-8 films with their city friends, in the more upscale neighboring suburb of Lutherville. Waters was attracted to the urban outcast culture, the intellectual gay art world that hung in grungy city apartments sniffing poppers, smoking pot, and making out with cross-dressers. In contrast, we were firmly in the heterosexual hippie world of thin girlfriends with ironed hair, shaggy beards, and folkie coffeehouses. We escaped to the country to smoke pot, ride horses, and skinny dip in gurgling streams. These groups didn’t mix much in 1960s-Baltimore. When I first met Waters in the 1970s, we were astonished how different our teen cultures were, even though we lived just two miles apart.

Eric attended Towson High School with Harris Glen Milstead, (better known as Divine}, who graduated in 1964. They were from different generations, but both represented little Towson’s weirdness. Eric dropped out of Towson High after being bullied for his long hair and weird hippie clothes. I might’ve followed in his steps, except my mother, noticing many warning signs, packed me off to St. Paul’s School, a private Episcopal school away from Towson’s many bad influences, like Waters’ parents did for him (albeit to a ridiculously strict Catholic school).

Besides his hippie persona, Eric was powerfully drawn to history and historical artifacts. He immersed himself in the ghosts of his family’s Civil War-era house. In elementary school, he hand-wrote earnest letters to famous people like Dwight Eisenhower, J. Edgar Hoover, and George Wallace, asking for their autograph for “school projects.” They always complied, sometimes sending multiple autographed items like election postcards and brochures. Eric was a passionate reader of history, especially the very niche, and mostly obscure topic of Maryland in Civil War. I never really understood why, because he wasn’t a racist, and more of a Communist than a State’s righter. I think he was just a great admirer of any rebel cause.

A few years before I met him, Eric told me that he and our mutual friend, Timmy, would dress in Rebel uniforms, walk three miles to Baltimore City’s Robert E. Lee Memorial Park, then swoop down on picnicking families swinging swords and howling Rebel yells, before vanishing into the woods. The park was originally built in the 1850s and named Lake Roland. A die-hard segregationist Southern Belle and admirer of General Lee, Elizabeth White Garrett, whose elegant Mt. Vernon Mansion was sold after her death stipulated that the proceeds be spent on a large monument to Robert E. Lee.

A monument of Lee on horseback was built, but on the campus of Johns Hopkins University, not little Lake Roland. It’s not clear if any of Garrett’s bequest was spent on that monument.  However, in 1945, a great nephew of Mrs. Garrett obtained a court order to spend some money to improve Lake Roland, and change the name to Robert E. Lee Memorial Park.

Flash forward to 2016. The name was changed back to Lake Roland, and the Lee statue was removed late at night, when Baltimore cleansed itself of all monuments celebrating the Confederacy, following the mass murder of parishioners in a black Charleston church.

Eric was also passionate about Col. Harry T. Gilmore of Dulaney Valley (just north of Towson) who waged Confederate-authorized guerilla raids on local Federal facilities, burned bridges, and anything else he could think of to help Maryland’s resistance to the Union “invasion.” Gilmore was imprisoned several times, but quickly “escaped,” assisted by local Confederate sympathizers.

Eric saw the Colonel’s harassing raids as a role model for his rebellious streak. Many times, Eric, Tim and I would bushwack through the woods by the Loch Raven reservoir to peruse the unmarked ruins of Gilmore’s family home. We hoped to find artifacts like bullets, buttons, and belt buckles; we found a few pieces, due to Eric’s uncanny ability to spot likely places where there were old trash dumps, collapsed sheds, or house foundations.

That section of rural Maryland had many abandoned 19th-century buildings, and for fun, we’d drive on back roads looking for collapsed barns and old abandoned homes. We’d find things like 18th-century documents, children’s marbles, blown glass bottles, knives, and maybe a bullet embedded in a brick wall. When we saw a little roadside antique shop, we’d stop and offer to sell a few items from our haul of the day for gas money, hamburgers, and pot. They were great escapes into a calmer past, away from the dizzying changes of the 1960s, and the wholesale destruction of 19th-century Towson for shopping plazas, strip malls and parking decks.

All of this was fairly harmless, except that Eric became hooked on acquiring artifacts—like he eventually did with drugs. When we went into these rural antique shops, Eric would scope out the place for truly valuable items like Daguerreotypes of Confederate Soldiers and slaves, and slip them into his pockets.