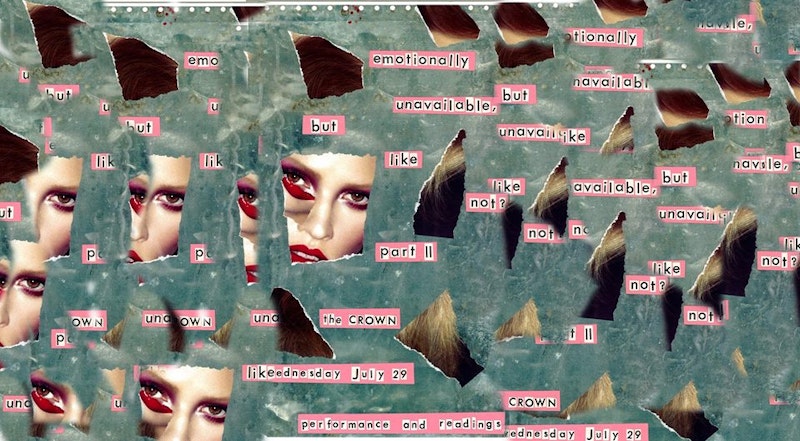 Going out gets old quick, especially if you started early and don’t enjoy drinking. Your first concerts are the best, when you’re still awed by the volume of a stadium band or the intimacy of a club where musicians man the merch table and walk amongst the crowd instead of looking like ants from the nosebleeds. Until I was 19, I found something to enjoy in almost every show I went to—it was never a chore. After years of playing in a band and suffering through countless shit sets, and even worse, mediocre music that I would’ve tolerated at a more impressionable age, going out gets to be a bore. Forget about going out for its own sake: social lubricants only go so far anyway, and they don’t cure boredom.

That’s why I’m thrilled by Baltimore’s new monthly series “Emotionally Unavailable, But Like Not?” organized by poet/musician Maya Martinez, a rising junior at MICA. There’ve only been two so far, in June at Terrault Contemporary, and last week in the blue room at The Crown, but it’s already my favorite performance series in the city. Full disclosure: I performed at the first one, but I’ve played with a lot of lousy musicians and writers, and chose to hold my tongue. Martinez curates each lineup, and mostly picks people that haven’t performed before, and encourages veteran artists and musicians to come up with something different than their usual gig. So you’ve got a packed crowd full of people cheering their nervous friends on, and enthusiasm abounds.

Installment #2 last week opened with Apologizer and Mieke, a duo featuring Lucas Rambo, veteran Baltimore musician and member of Human Host and Sick Lion, among others. Rambo read poetry through a series of delays over a bed of flanging synths, while Mieke posed in profiled silhouette behind a white sheet. Next up was Maggie Fitz, recent MICA graduate and lunar lovely who read poetry of her own and a poem about her that some rando sent her online which she found flattering rather than repulsive. Fitz’s work is full of planetary imagery and digestive romance, as strange as that sounds—being swallowed whole, ripe with roses and kitties and violent rendering. Renan Machado powered through an illness with a set of percussive poetry that gave dignity back to what most people think of when they hear “poetry reading.”

Carlyn Thomas delivered an uproarious set of stand-up comedy about sexual politics, and for a first time “comedian,” she blew everyone away. Her pacing, delivery, and quality of material was natural and professional, and if I didn’t know, I would’ve thought she’d been doing it her whole life. She lamented the lack of porn produced for women (“Why can’t I find something like “Cute couple eats a farm to table meal and then fucks lovingly? Or, couple takes a long walk on the beach and then fucks on a bed of leaves?”) She excoriated the “horse girls” that made fun of her in middle school and called her a poser for wearing a horse shirt despite lacking a family stable, and then realized these girls had figured out a subtle way to get their rocks off (“I came so hard on Buttercup today”).

Troy Towers, a Johns Hopkins grad student, read a long piece about loneliness, depression, being a speed freak, with plenty self-deprecating and defensive pre-emptive references to Lacan and a casual “Bush Did 9/11” joke, which rankled me a bit, as 9/11 has passed into the same trivial territory as doge memes, but his monologue was powerful and frequently hilarious. I believe Towers brought the most people out to The Crown that night, and he received rapturous applause at the end. Last was Alexandra Brandon, otherwise known as TRNSGNDR/VHS, and recent frequent in the Baltimore scene, who read a piece about inequality and white supremacy and white ignorance in supposedly progressive and liberal environments like our precious little community. She ate French fries off the chest of a white man and endured rude heckling from a couple stragglers in the audience, but her performance was brief and powerful, and echoed many of the sentiments expressed in Jana Hunter’s much discussed op-ed for Pitchfork last week about inequality in the Baltimore scene.

I couldn’t be more excited for the future of “Emotionally Unavailable, But Like Not?” The purity of new and nervous performers and the opportunity for veterans to stretch out and try something they wouldn’t be able to elsewhere is invigorating as an artist, and it’s something I haven’t seen in ages. Look out for part three at the end of this month, somewhere in beautiful Baltimore.