Art Is My Gift and It's Never Enough

Pt. 1 of an interview with Wham City's Adam Endres. 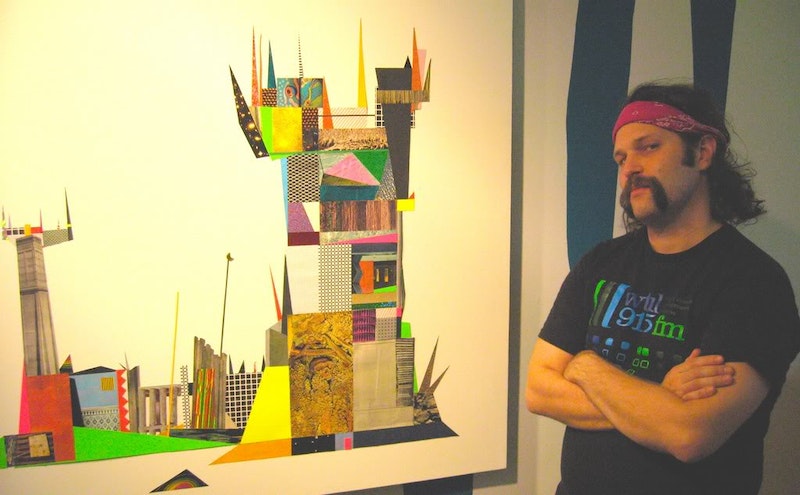 In the late 90s, as a freshman at SUNY Purchase, Adam Endres met Dina Kelberman. Endres was a filmmaker, Kelberman a graphic artist, and at first they were just two weird kids in a school known for weird kids. But they would soon become founding members of Wham City, the Baltimore arts collective brought to fame by electronic musician (and hipster icon) Dan Deacon.

As a junior, Endres decided to take a couple years off. When he returned to Purchase in 2003, he met up with Kelberman again, who was now dating Deacon. That set everything going. In 2004, Endres moved to Baltimore with Kelberman, Deacon and others. He's since starred in several Wham City theatrical productions (including Beauty and the Beast and Jurassic Park), booked shows at the Zodiac, fronted bands like Blood Baby and The Creepers and helped organize every Whartscape and Round Robin. Most recently, Endres starred in Donna Sellinger's production of Les Miserables. I interviewed Endres earlier in the summer at Baltimore's One World Cafe. Part 1 below.

SPLICE TODAY: So you went back to SUNY Purchase after two years and Dina was still there.

ADAM ENDRES: Yeah, and really that's when I met everyone else. Because Dina was now friends with Dan and Connor [Kizer].

ST: So because you left, that was the only reason you met everyone from Wham City?

AE: I probably would have met them during my senior year but everything would have been different for sure. Because I came back and all the people I was used to hanging out with had already graduated. The film program only takes 20 people a year and they usually kick out maybe one-to-four people a year so there's usually only, like, 12 people in the graduating class. So I went back and suddenly everyone in my class was gone and I’m surrounded by this new group of 15 people.

ST: And you were the last one to move to Baltimore?

AE: Yeah. I remember they all moved here in May of 2004, after they graduated, and I was like "Baltimore? That's stupid. I'm not gonna go to Baltimore." [Laughs].

ST: Had you ever been?

AE: Um, I'd never been to Baltimore but I had driven by it and Baltimore looks like a really unappealing place from I-95. They were all like, "It's cheap and we're gonna go live in this disgusting warehouse," and I was like, "Okay, great, have fun." [Laughs]. So, I just continued to live in Westchester County because my apartment's lease wasn't up until September or October, anyway. But I never found a job. I was just being picky, you know? I only wanted to work in film. So I decided to visit them and I went down there in September, and then the only time I left was to go get my shit. I remember when I first got down there the garbage can was overflowing—one of those big outdoor garbage cans—and right next to it was just a huge pile of garbage twice as big. They were just living in utter filth, you know? But, for some reason, I was like, "Perfect!" [Laughs].

ST: Who was living there?

AE: When I visited it was Connor, Pete [O'Connell], Abra [Aducci], um, I think Dan and Dina had already broken up so she might have moved to the floor below and Dan might have been on tour so I didn't even see him. And then eventually Josh [Kelberman] moved in too. And then we met Mason [Ross] who lived upstairs. They just seemed to fit in.

ST: Did you think about moving to LA or NYC to further your film career, before you moved to Baltimore?

AE: I did. Rochester is about 30 minutes from NYC, so I was definitely thinking about NYC, but it just seemed too expensive. I had worked on a couple of student films and there were just so many times I'd be standing there holding a boom mic or arranging these lights and then afterwards, thinking, "This film is just such a piece of shit," you know? Like, "What am I doing?" I just didn't…

ST: And not making any money for it?

AE: Right. No money at all. I did do some editing work on a commercial that paid but I was just always working on these things that sucked and I really wanted to make on my own movies but didn't want to have to deal with climbing some corporate ladder. I wouldn't say I gave up or anything. It's still my dream to make movies, but since I've moved here I've mostly done theater and music.

ST: What kind of films were you making in college—you said in our emails you had to make one short film a year, right?

ST: Did you cast Dan or Dina or anyone from Wham City?

AE: Connor had a role in my senior film. Dan and Dina were extras in that too. There were a lot of people who live in Baltimore now actually who were extras in that. It was a musical and there was a big dance number with like 50 people at the end and—well, it took place in a mental institution and Connor was a patient who had this compulsive desire to eat shit. So, you know, he had a real role. And I cast myself as the lead in that film.

ST: I'm sure you've been asked about the Wham City production of Beauty and the Beast about 10,000 times but I was hoping you could tell me how that came about.

AE: I think that was January 2005, a few months after I'd moved in. We had gone to this thrift store in Severna Park and I'd found this cassette tape of Beauty and the Beast. I didn't even tell anyone I bought it, but on the way home I put it on and everyone was singing along and knew every word to every song. I think it was me, Abra, Connor, Josh, probably Pete, but by the time we'd gotten home we'd listened to it probably three times. And then maybe a week later we were all at the Mt. Royal Tavern getting drunk and someone was just like, "Aghh, we should just put on Beauty and the Beast!" And somehow that drunk decision became a reality. And all we did was put up flyers in the Copycat, you know? "Hey, come to our show on Thursday!"

ST: Did you make your own costumes and everything?

AE: Oh yeah. We did everything. And the first time maybe 25 people came. And then maybe a month later we put it on again and the place was jam-packed full of people.

ST: I know that the Copycat is really popular now among artists and musicians but what was it like back in '04/'05 when you first moved in?

AE: Well, I know that when we put on Beauty and the Beast it was like, "Oh, you didn't follow the protocol. When you put on a show at The Copycat you let everyone know, make sure it's okay." So there were some problems there, but we were like, "Huh? Well, whatever." You know? Like, "Oh, we'll have our friend's band play this weekend, it's free, who's gonna care?"

ST: Was there any press involved? Like, did The City Paper take notice?

AE: I don't think so. Again, like the second time we did it I think we only put flyers up in the building. I guess everyone liked it the first time so much they told everyone they knew to come.

ST: Do you remember the first write-up you got? I'm trying to figure out when the press first took notice of Wham City. What about the first Whartscape, what was that 2006?

AE: I know we were constantly asking the City Paper not to write things because then the building manager would come and be like, "Why is this in the paper? You can't have shows here." But at that point the manager was this crazy guy who would just show up and be like, "Um, do you guys—I need rent money." And we'd be like, "We paid rent." And he'd be like, "Oh. Well… Okay. Guess I'll check upstairs then."  [Laughs].

ST: Did he ever say anything about how you destroyed the apartment? I read in another interview that you tore down all the walls between rooms.

AE: Not really, he just really didn't give a shit. He would only give a shit if it was like four a.m. and the cops were there and he had to deal with something. Actually, the first Whartscape we got some sort of advertisement somewhere before it happened. You know, 30 bands, date and time. So he called us up asking about it. "Oh, hope nothing happens…" [Laughs].

ST: How long did you live there?

AE: Well. Hmm… in May 2006, we moved to the fourth floor. We were there for two more years, I think. And then in 2008 we moved out of The Copycat completely, so we've never really had a real home base since. Maybe The Zodiac, but that was just a place we'd book shows and just do whatever we wanted with.

ST: So why'd you finally move out?

AE: Well, the lease was up and they just told us, "We don't want you here." You know, just too many shows. By that point we definitely had gotten some publicity. So, without being asked to leave we were asked to leave.

ST: Is Wham City still a collective then?

AE: Oh, it definitely is. When we left the Copycat we were struggling to stay together, to find a space for all of us, but that didn't happen. So it was hard but—"Adult Swim" has actually contacted us and we're currently pitching them a show idea. So, you know, if they like the pitch we'll make a pilot, if they like the pilot we'll make a show. That's brought us back together. Our fingers are definitely crossed on that one.