The Orioles Miss the Trade Deadline But Who Cares?

Dan Duquette's got his hands full. 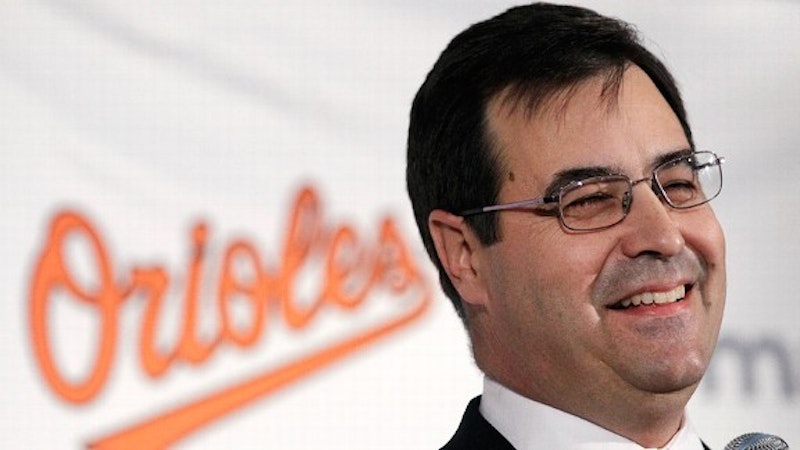 Baseball's trade deadline came and went with little fanfare in Baltimore. The surprisingly competitive Orioles failed to pull off a last minute trade despite numerous rumors in the week leading up to July 31. The Orioles were supposedly interested in pitchers Zack Greinke, Matt Garza, and Joe Blanton as well as Padres third basemen Chase Headley.

Greinke ended up being dealt to the Angels for a package of three prospects. Garza came down with a sore arm last week and wasn't traded prior to the deadline. Headley has long been the subject of trade rumors due to his extreme home/road splits. He’s posted a .664 OPS in 315 games at San Diego's cavernous Petco Park and a .816 OPS in 318 road games. The consensus is that Headley would be an All-Star if he could just escape Petco. Apparently no one was willing to pay the Padres price to find out.

Orioles VP Dan Duquette has received some criticism around town for his inability to pull off a deadline deal. I was critical of Duquette's off-season moves, especially the Jeremy Guthrie/Jason Hammel swap (oops), but he's done a fantastic job of tweaking Baltimore's roster throughout the season. He traded for outfielder Steve Pearce when Nick Markakis needed wrist surgery; discovered pitcher Miguel Gonzalez from baseball's scrap heap; and traded some low level prospects for DH Jim Thome.

Fact is, Duquette went into the trade deadline with his hands tied behind his back. The Orioles have two prospects in Dylan Bundy and Manny Machado who are generally ranked among the top five prospects in the game. There's a huge drop-off from the Bundy/Machado duo to Baltimore's next best prospect. Baltimore's failures in scouting and player development are largely to blame for the current extended run of big league futility. Despite having two of baseball's best prospects the rest of the minor league system lacks potential impact players. Double-A second baseman Jonathan Schoop is the Orioles next best prospect but the 20-year-old has struggled to a .692 OPS. Schoop is the Orioles' best option for a long-term answer at second base but he wasn’t highly regarded enough to anchor a deal for a talent like Garza, Greinke or Headley.

The ongoing struggles of Baltimore's young starters further hindered Duquette's efforts. Jake Arrieta, Brian Matusz and Zach Britton have all crashed and burned at the Major League level this season. If Duquette dealt any of the three in a deadline trade he’d have received pennies on the dollar in return. Rather than selling low on a young pitcher, or parting with an untouchable like Bundy or Machado, Duquette decided to stand pat. It's hard to blame him.

Joe Blanton was the most realistic option of all the players rumored to be headed to Baltimore. He's pitched to a 4.59 ERA and allowed a National League leading 22 homers for the Phillies, while earning $8 million in the last year of his contract. A Blanton to Baltimore deal looked like a near certainty on Monday night but never came to fruition. Apparently the teams couldn't agree on an appropriate prospect return or who would assume the remainder of Blanton's hefty contract. Blanton wouldn’t have been a major upgrade for the Orioles but would’ve eaten innings and taken some stress off the bullpen.

Orioles' fans shouldn't lose any sleep over not getting Blanton. He's basically a rich man's Tommy Hunter. The O’s front office should lose some sleep over the fact that the team is in second place despite a run differential of -60 for the season and a farm system that lacks the depth to acquire someone of diminishing ability like Blanton.