John Waters taught me how to be politically and religiously incorrect. 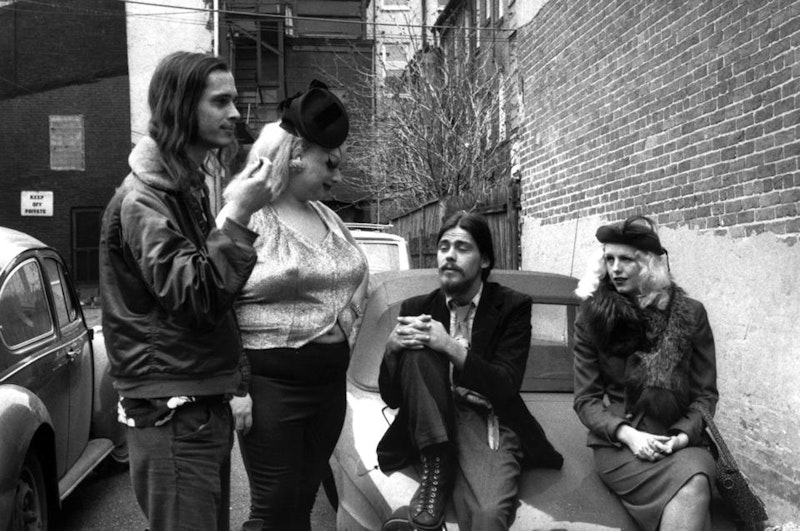 My mother told me if I went to Woodstock not to bother coming home. I was only 13 but believed I was wise beyond my years. I’d experimented with LSD and mescaline and thought I’d discovered the answers to life's riddles. My first acid trip was the year before Woodstock, in 1968. I’d obtained some pure LSD known as orange sunshine. I took a dose and walked the half-mile stretch heading north on Harford Rd. to the Fairlanes Bowling Alley to meet friends and play the pinball machines. We didn't bowl, although I was a member of a duckpin team called the Jawbreakers a few years before. I was wide open to all the world had to offer, a lot of which wasn’t always pretty.

The acid kicked in as the pinball tote board flashed, bells rang as the number tally box clicked and clanged faster; the sound of bowling balls thumping and rolling and pins crashing was ear-splitting. The fluorescent lights were blinding. Looking around the bowling alley I became acutely aware of every action of each person there. My buddies were laughing and slapping the flipper buttons as I watched the pinballs glow and bounce off the rubber bumpers beneath the glass cased machine. I was no Pinball Wizard. I had to get out of there quick before my head exploded.

Not even saying, “See ya,” I bolted, walking away from my imagined madness. I became animated in the twilight of a humid summer’s night. Everything was calm except for an occasional car driving by. Birds tweeting, crickets chirping, distant sirens, barking dogs, all echoed in unison to a twangy reverb. I slowed my pace and took in the perfect symmetry of the tree leaves, the grass plots. The flower gardens came alive with neon colors and wavy motions. I was overwhelmed with a feeling of contentment. I looked down on the sidewalk and there lay a perfect white rose. I picked it up and stared in amazement. I smelled the sweet aroma of that rose and marveled at its simple beauty. I’d heard a lot about flower power but this was ridiculous.

Approaching home I began to panic thinking I'd have to face my folks and act normal. Luckily, on arrival my dad was snoring away on the sofa and my mom was smoking a cigarette and watching TV in the kitchen. I said a fast hello/goodnight and bolted straight to my room. By now I was tripping my balls off. As I lay in bed heavenly music played inside my head. Gazing at the ceiling, I watched cartoons flicker in full color. I looked over to the bookshelf as words began falling out of the books, slowly floating to the floor.

Was this normal behavior for a 13-year-old? I’m still unsure. It was like this for many of the kids I knew in my Hamilton neighborhood. We consumed a steady diet of rock ‘n’ roll, Sci- Fi, and schlocky horror movies. The constant TV offerings of Alfred Hitchcock, Captain Chesapeake, Lancelot Link, Ghost Host, Creature Feature, The Outer Limits, Twilight Zone, and the classic films of Laurel & Hardy, the Marx Brothers, W.C. Fields, Buster Keaton, Charlie Chaplin, and The Three Stooges. You throw hallucinogens into that recipe and your head just kept expanding. Add some Velvet Underground, Iggy Pop and the Stooges, The New York Dolls, Alice Cooper, Rolling Stones, Captain Beefheart, Frank Zappa and The Mothers of Invention, T Rex, David Bowie, and Brian Eno, and you have a volatile cocktail.

By the early 1970s, my best friend Michael and I spent our days and nights tripping, partying, listening to records and attending live local rock concerts and music festivals. Our first music festival was The Read Street Fun Fest. It was a yearly rite of spring and the highlight of the freak and hippie locals. We saw “POOBA,” (Great Pooba Subway) a homegrown glam rock band similar to the New York Dolls with big hair, make-up, glitter, spandex tights and leather. The entire community of freaks, hippies, beatniks, gays, spiritualists, atheists, communists, weirdos, and the lunatic fringe were there. Alternative lifestyles and mind-altering substances were in abundance. The counterculture was becoming a bankable commodity.

At one point Michael and I sought refuge in a townhouse doorway to escape the crowd. A guy in a top hat, oblivious to us, came up the steps and started pissing on the front door. A woman below us on the sidewalk was flashing her breasts. It was freaky. It was Baltimore. At another music festival one Sunday afternoon in Wyman Park Dell, we saw a couple of freaks strip and start fucking on the hill in the middle of the disaffected crowd. 1972 was a milestone year for me as I saw Captain Beefheart perform at Town Hall in Manhattan. Michael and I saw Alice Cooper at Baltimore’s Civic Center and attended the premiere of John Waters’ film Pink Flamingos in the auditorium of The University of Baltimore.

Life as we knew it would never be the same. For Michael and me, what Andy Warhol was to New York City, John Waters was to Baltimore. As our guide, we appreciated the way Waters quenched our thirst, taught us to be politically and religiously incorrect, and loved the way he took us further into the unknown. The grand trilogy of Pink Flamingos, Female Trouble, and Desperate Living became our Holy Bible. We went on a crusade to see all his early work including: Mondo Trasho, Multiple Maniacs, Hag in a Black Leather Jacket, Eat Your Make Up, and The Diane Linkletter Story.

Films like Dr. Strangelove, Midnight Cowboy, and Easy Rider were imbedded in our brains; Night of the Living Dead, Texas Chainsaw Massacre, The Hills Have Eyes, and Eraserhead gave us the human condition magnified into an American meat market mentality, and consumer nightmare reality. Our life at the movies gave us pause to reflect and gather strength to fight against the mediocrity and mundane repetition that passes for living in the modern world. John Waters’ pre-Hollywood films were radical and revolutionary. They were the gospel truth about hypocrisy, prejudice, rejection, and our perversities about our morbid fascination with viewing the sufferings of others.

When Texas Chainsaw Massacre II came out in 1986, we were psyched. My friend Piggy and I discussed going to the first show matinee on opening day. We decided to go early because we were sure there would be a line down the street of fans dying to see this new addition to one of our all- time favorite films. Arriving at the Boulevard Theater we were surprised not one soul was in front of the ticket box under the marquee. We were early so we figured the faithful would be arriving any minute. Just then someone walked up to us. It was John Waters. “Hey John, we got here early because we thought there would be a long line.” “Yeah, me too,” he replied. The three of us had the entire theater to ourselves.

Baltimore has always had an inferiority complex because of New York and Washington DC. Stuck between the mecca of art and the cradle of democracy. All of that has changed now, for better or worse. Baltimore’s known today for the murder rate, racial injustice, the police and political corruption, general greed and conspicuous consumption. Case in point, Fells Point, as Russ Smith wrote about earlier this week. Having lost its backwater charm long ago, the final nail in this waterfront coffin is set. It’s now the hangout destination for tourists throwing money around and drunken college jocks.

Fells Point was once home to the offices of Waters’ Dreamland Productions, and Edie’s Shopping Bag thrift store. A seedy plethora of misfits, oddballs, lovable cranks and curmudgeons. Also the most dive bars per square foot. Now it’s the new home to speculators, carpetbaggers, and wealthy realtors. They boast about $400 hotel rooms and craft whiskey bars. My love affair with Baltimore is over. She’s broken my heart too many times. Baltimore’s just another city now crowding the American nightmare scape. Should Waters go back to his roots and make a new low-budget cult classic? It’d be nice to see. The time is certainly ripe for it. But Baltimore’s doing a pretty good job of it right now, without any movies to show us the errors of our way on the road to ruin.