Miles of Smiles in Our Modern Eden

Perspective on how much better life on Earth has gotten in recent years. 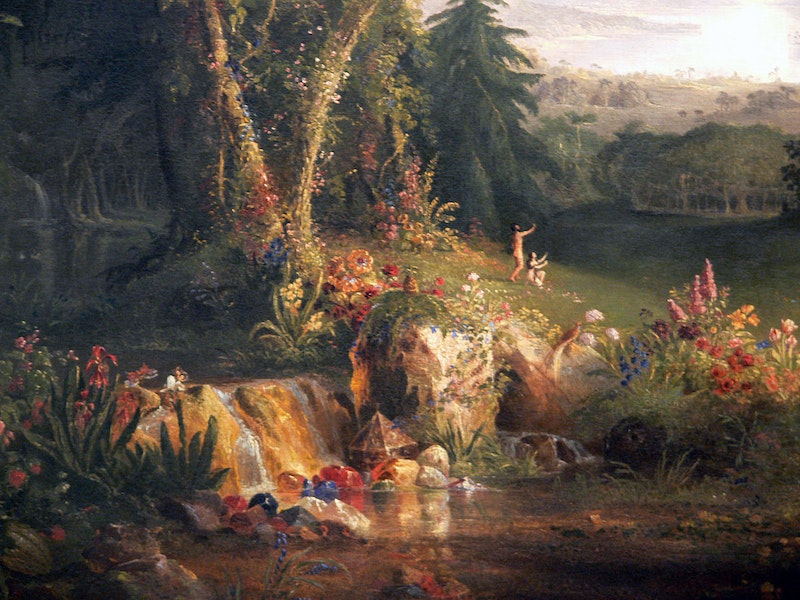 I’m all smiles. All smiles. I’m smiling now. It’s the new me. Walking on sunshine and surfing the waves that circle our Global Village. Nicholas Kristof wrote on Sunday for The New York Times that “2017 Was the Best Year in Human History.” A challop, a troll, or just another overpaid op-ed columnist making quota? Kristof’s points aren’t nutty, and I’ve heard the same arguments before: even as we’re exposed to more information more quickly than ever before, our ever widening perspective obscures the larger fact that humanity’s most pressing issues—hunger, poverty, illiteracy—are improving all over the world.

But at the same time, we can watch helicopter crashes in Myanmar, SpaceX missile launches over Los Angeles, hardcore pornography, terrorist snuff films, and relentlessly bleak human interest stories about the dog that got cancer 10 times and the deaf, blind, and dumb toddler that helped him get through it aren’t relegated to the local 11 o’clock news anywhere. I get push notifications from the Times about elderly women that died of exposure in South Dakota and Native Americans sprayed with water canons in freezing temperatures and I can’t figure out the motivations or the mindset of the people that actually read this shit. Is it “Thank God I’m me, not one of those”—or is it grief tourism? It’s the same emotional genre as the most exploitative episodes of NPR’s This American Life, where Ira Glass reads devastatingly sad and mostly hopeless stories of anonymous desperation to a soundtrack of somber saxophones and questionable marimba. I mean, really—who reads this shit?

So I appreciate that Kristof is being a contrarian with this column and is able to back it up. Statistics like this reveal the fundamental narcissism of centrist liberals that belong to #TheResistance and had a nervous breakdown when Vanity Fair made fun of Hillary Clinton: “As recently as the 1960s, a majority of humans had always been illiterate and lived in extreme poverty. Now fewer than 15 percent are illiterate, and fewer than 10 percent live in extreme poverty. In another 15 years, illiteracy and extreme poverty will be mostly gone… Just since 1990, the lives of more than 100 million children have been saved by vaccinations, diarrhea treatment, breast-feeding promotion, and other simple steps… Every day, 325,000 more people gain access to electricity. And 300,000 more gain access to clean drinking water.”

“Make America Great Again” was a winning rallying cry because it articulated “a nostalgia for a lost Eden.” But look at 1950s America and its polio, its structural racism, its virulent homophobia, its legitimate Cold War and nuclear paranoia. And that’s just in our “Eden.” Who wouldn’t rather live now than the messy, repressed 1950s, when everyone drank milk and central air was still a myth? Not to mention all the dictators, -isms and lack of access to information… most of us would be miserable kings without smartphones in bygone eras.

Kristof ends his column with this rare moment of clarity for the Times op-ed page: “The most important thing happening right now is not a Trump tweet, but children’s lives saved and major gains in health, education and human welfare.” Of course this column got buried, because that sentence essentially invalidates the very place it appears. What defines our time more than anything is “more,” everything is just more: faster, bigger, more widespread, more severe, more dramatic, more upsetting, more thrilling.

“Late capitalism” is the buzz-phrase of the moment, and “accelerationism” is closely linked. We’re in the eye of a storm of vast change that’s almost impossible to cobble together a coherent perspective on because we can’t see past the time horizon. Robots with shreds of sentience and emotional understanding exist. They can also jump over walls and crush skulls with little resistance. Whether Donald Trump is going to slip up and call Maxine Waters a slur is an understandable preference for distraction, because it’s something we have relative control over compared to, oh, take your pick: climate change, robots, nuclear war, mass shootings, terrorism, police corruption…

I join Nicholas Kristof in counting my lucky stars and hoping to say the same a year from now. Earth is a wonderful place to be. Let’s hope those two fat idiots don’t blow it up before we hit the Roaring 20s again. It’ll only be a couple of years.