Why Teens (Really) Find the End of the World So Appealing

Somebody has to weigh in and stop the madness. 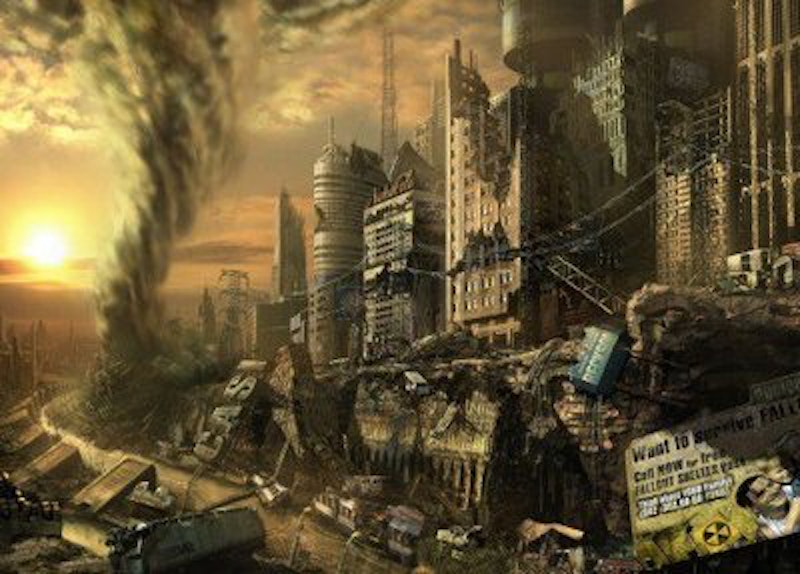 National Public Radio has never really established an audience among teens. It is, overwhelmingly, the radio station that parents choose, and that they often inflict on their teenage children while driving them around—which is, of course, something the parents of teenagers do for several hours per day. The natural mistrust of All Things Considered, on the part of teenagers, is the reason I got very nervous when I saw that Google and Pocket were spotlighting an article from NPR entitled “Why Teens Find The End of the World So Appealing.” It’s a great question, but I wondered what the sonorous, mature reporters at NPR could possibly know about this. The answer turns out to be, nothing.

Let me be clear: we’re not talking about actual apocalyptic or post-apocalyptic fiction. The story’s subject is dystopian fiction, a genre that (according to the author, Elissa Nadworny) is “so popular with teens” that we have to try to understand what draws them in. Is it adolescent cynicism? “Teenagers are cynical,” one kid assures Nadworny. Is it a reflection of the way teenagers see adults? “How messed up grownups are” is “a hallmark of dystopia,” writes Nadworny, ignoring the fact that most teenagers wouldn’t be caught dead calling adults “grownups.” Or is it a sign of kids adjusting to a baffling and hostile adult world? “Teen readers themselves are characters in a strange land,” Nadworny asserts. “Rules don’t make sense. School doesn’t always make sense.”

Drowning in possibilities, Nadworny takes the road most traveled: cognitive studies. Teenagers have developing brains that “are very responsive to emotionally arousing stimuli,” according to Laurence Steinberg, a psychologist from Temple University. Dystopian novels have “all that sadness” that teenagers crave, “plus big, emotional ideas: justice, fairness, loyalty, and mortality.”

At this point—the point where teenagers are accused of being sadness junkies because of their comically miscalibrated brains—somebody has to weigh in and stop the madness. I’ve taught literature to teenagers for over a decade, and I’ve had a chance to observe their reactions to all sorts of fictional worlds (some ending, others not). Here’s the real story.

Teenagers actually aren’t drawn to dystopian novels as surely as we might think. They get interested in dystopian fiction partly because they’re constantly required to read it. A novel like Lois Lowry’s The Giver is a mainstay of elementary education, and later on in school, most students read books like Brave New World, Fahrenheit 451, and 1984, and/or novels with dystopian echoes, such as Lord of the Flies or One Flew Over The Cuckoo’s Nest. Teachers love these novels because they’re easy to mine for social criticism and ethical dilemmas. Students like them for many reasons; for starters, they’re usually among the first works of literature that students can confidently assign to a genre. That gives them newfound power as thinkers: assigning a genre means playing the critic, something teenagers are just beginning to learn how to do.

Of course many dystopian novels, including recent blockbusters like The Hunger Games and the Divergent series, have alienated protagonists who don’t fit in anywhere. Teenagers often identify with those characters. This isn’t unique to dystopian fiction. Holden Caulfield (from The Catcher in the Rye) and Meurseult (from The Stranger) don’t fit in either, and they’re just as beloved. There’s another important demographic, besides teenagers, who also read and enjoy these novels about outsiders: adults, for many of the same reasons. It’s condescending and misleading to characterize the passage from adolescence to adulthood as a journey from alienation to integration. The dilemma of the individual’s place in society never really goes away; the adult ability to make peace, and to do so in bad faith, proves nothing. (When kids do that, however, we accuse them of giving in to peer pressure. They really can’t win.)

But perhaps the most important reason why teenagers like dystopian novels is that they’re old enough to start thinking about the way societies are constructed. They begin to recognize political structures and social norms as contingent entities, subject to change and varying widely. What fascinates them about dystopian novels is the attempt to engineer better societies, and each novel’s judgments about the results of those experiments. They see and judge, for themselves, what Mustapha Mond and O’Brien are doing. They do so on an equal footing with adults, and that’s precious, because the alternative to speculative fiction (including dystopian fiction) is usually the dreaded coming-of-age novel. Those lead inevitably to lectures from adults about what it means to become an adult, a genre that has never been popular with adolescents, and never will be.

Ultimately, teenagers want what everyone else wants. They want to be heard. They want to be taken seriously. They want the chance to form their own opinions about the moral and ethical issues in the literature they read. As a body, they’re not cynical, isolated, or melodramatic. So we have to ask ourselves why, all of a sudden, we should be striving to explain what teenagers like so much about dystopias and the end of the world. The answer isn’t pretty. If we can fence off dystopian novels as so much adolescent melodrama, then we adults are protected from the questions those works of art were designed to ask. “These books offer a safety net,” writes Nadworny, quoting Steinberg to the effect that kids can “flirt with [different identities] without getting into trouble” by reading dystopian novels. Meanwhile the kids are walking a rope suspended above an abyss, thankful for the writers who dispense with the safety net altogether, and let the world burn, or freeze, or change.