The 24-hour competition isn’t just for the birders. 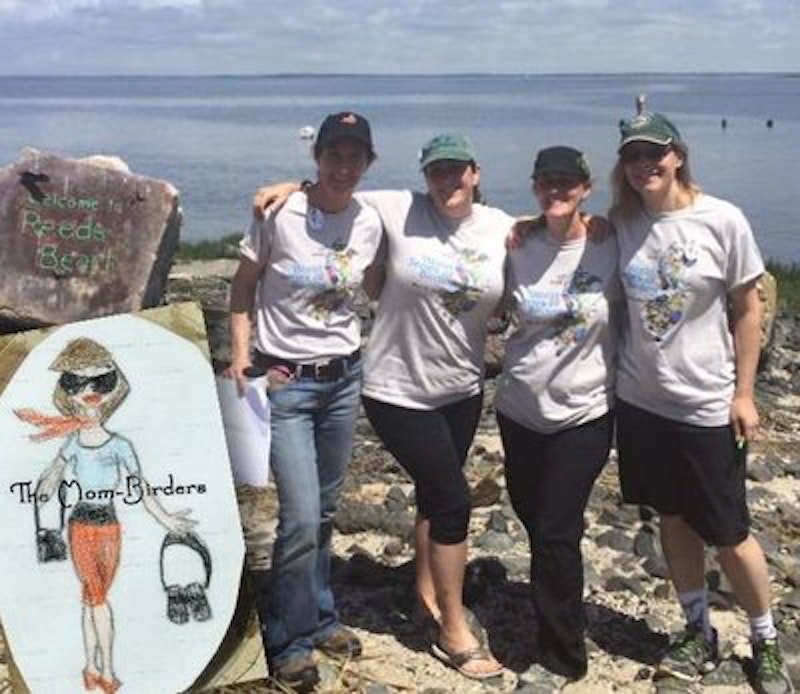 Last weekend I attended the 32nd annual World Series of Birding in Cape May, NJ for my fourth year. My daughter’s youth birding team competes every year in the 24-hour-long competition to identify as many birds as possible on the “Big Day.” To prepare, the kids spend the rest of the year learning bird species and bird-watching around to various habitats, often in very early morning. My girl can identify over 300 varieties and her team has won the youth world title twice. This is a girl who sends her birthday money to the Audobon Society to save endangered birds. Her friend designed great pins (photo inset above- we are never as glamorous as that pin, especially at 3:00 a.m.) to present to us on the ferry.

This year the team entered middle school and aged out of the elementary school division that came with a coach who was also their designated driver. It would be up to us, the moms, to navigate the kids through the pine barren forests, marshy wetlands and sandy, rocky shorelines of Cape May County to find the maximum number of bird species listed on their checklist.

The map used in years past belonged to the elementary school team. We were given a New Jersey map and the coach’s written directions to previously-visited birding spots, consisting of 105 steps. We arrived Wednesday for the Saturday competition, spending three days “scouting,” which means driving around figuring out what birds are where and how to get to the most productive spots. Driving the car while my friend navigated, I was terrified about the Big Day. One missed turn could mean one missed bird and a second place finish, and who wants to take the blame for that? It was game time.

The Saturday competition is from midnight to midnight. When they were on the elementary school team, the kids left around 4 am and returned to the finish line around 8 pm. Because they weren’t out in the dark long enough, the team had never recorded owls in competition. This year, they wanted owls. We read scouting reports posted online by other teams and found a wildlife preserve where we were pretty sure we could pick up an owl or two, plus the other pre-dawn birds like the Chuck-will’s-widow and the Whip-poor-will. But we had to figure out a route, relying on Siri and Google maps to get us where we needed to go even though she wouldn’t understand a “take us to the owls, Siri” command.

We left the hotel at 3 am, stopped at thank-God-it’s-a-24-hour-Wawa for coffee, and headed up the Garden State Parkway from Cape May. We found a lake, parked quickly and turned off the car engine (an act that would be repeated more than a hundred times that day). A fog came off the water as the kids stood, motionless, the binoculars around their necks useless in the dark. And then, all at once, the four kids jumped skyward, doing celebratory dances and high-fiving each other. Not only had they heard their first owl in competition, but it was a Long-Eared Owl, the most rare kind on the list.

The day went on from there, filled with screeching halts, a Great Horned Owl owl (later at 9pm, along with a Barred Owl… and a cat eating a mouse in the street that they thought for a second was an owl), tons of ticks, and many quick snacks eaten between stops. There was a tiny island covered in dead trees that served as a rookery for dozens of Cormorant and Egret nests. There were moments of excitement (an immature Bald Eagle in flight), moments of disappointment (why couldn’t they find the Turkey they’d seen yesterday in scouting?) and moments of beauty (the sunset as the sea mist rolled in).

I stopped and started the car, pulled over, “zipped” down highways without getting caught for speeding (which would disqualify the team), “dipped” on birds we couldn’t find (damn you, Rose-Breasted Grosbeak) and got to see a beautiful bird I’d never seen before. Although you’d think I’d see tons of birds, normally only the kids got out of the car at quick stops, and many birds are identified by call, not sight. Also, I’m too old to adjust the binoculars fast enough and by the time I zoom in correctly, the bird is always gone. But I hope I see another Indigo Bunting. I learned they live in the field right next to my house—I didn’t even need to drive all over Jersey to see one. One of the coolest things about birding is that it teaches you to listen. The suspenseful silence is gorgeous.

The kids crossed the World Series of Birding finish line to much applause at 10 pm, after 19 hours of birding. I know they’ll want to leave earlier and stay later next year. I don't mind. To me, being a mom-birder beats any sports sideline (not including the dugout).

Unbeknownst to us, another youth team in our division had decided to bird the whole state of New Jersey instead of the Cape May County route used in years past by youth birders. As a result, they had 191 birds to our 138, which was a team record number for us. There were a few tears about coming in second place this year. The winning team actually fielded three age-division teams, one of which reported seeing ten more birds than the Cornell Ornithology team that normally wins undisputedly due to their expertise, experience, equipment, and really cool black ops style matching North Face outfits. But birding is an honor system, so everyone has to believe that teams wouldn’t report more birds than they actually encountered.