The groundhog curled the edges of his lips in one of his rare, faint smiles. 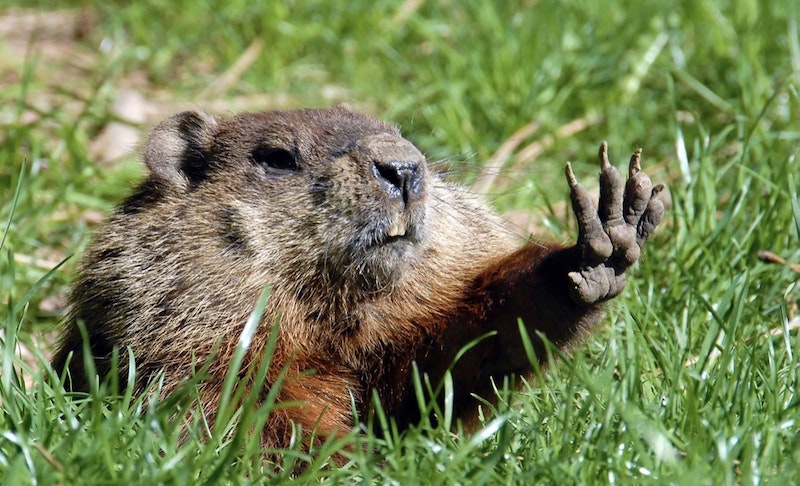 The groundhog and Westsylvania Eddy Nakhoi sat down at a table, still in the Bermuda shorts and Hawaiian shirts they’d worn for filming on the set of the new lotto commercial. They made small talk and barely looked up when Tony Mercui, who owned the pizza shop, brought their pies.

Meme, the groundhog’s assistant, had run out to move the van they’d arrived in, giving them a few minutes to discuss business in the otherwise empty dining area.

The groundhog broke the uneasy silence that had drifted over him and the Senator. “So my friend told me about this game they’re getting people—willing participants, mind you—to play. We’ve already made a pilot. It’s based on all those old-time movies about jailbirds who escape from chain gangs who have to run around shackled together. Viewers pay to watch and take bets on who wins.”

“I would’ve called it Escape Room,” replied the groundhog, “but it turns out that was already taken.”

“Sounds stupid.” Nakhoi tore off a third of a slice with his sturdy, equine teeth. “Is the lotto commission looking to get in on this?”

“We already are. We’re gonna have the criminals from the prisons and the sickos from the mental institutions try it out to see what happens.”

So you just chain them together? What do they have to do?”

“Well, that’s the fun part,” said the groundhog. He blinked his eyes, pausing with them closed, then locked eyes with Eddy. “They don’t know. We tell them they have to figure it out, and then we see how long they can survive.”

The groundhog watched Nakhoi reach for another slice and chomp off a hunk of crust, which he chewed gooily and swallowed.

Fortified, Eddy had an idea. “I’d bet on a team of people with special powers. Like, I’d get a prisoner who can pick locks and a mental patient who can do Rain Man stuff and maybe some guy who’s doing time for serial killing and another who’s good at tax fraud and knows all the loopholes. Like the Amazing Race on a meth binge.”

The groundhog curled the edges of his lips in one of his rare, faint smiles. “Well, Senator,” he said, “part of the fun is that those teams don’t always win. In fact, we once created a team of six angry tough guys and set them loose—chained to each other, of course—in the woods. They were pretty good at catching food, obviously, but it didn’t take long before two of them were fighting over who was the best at it.”

“There was another group in the pilot,” the groundhog continued. “This was hilarious. It was all people who really wanted to help each other. They tried so hard to help each other, to help the most other people, that it turned into people helping people help people. No one actually got helped.”

The Senator snorted as he chewed a third slice and Meme walked back into the door. It was time to change the subject, the groundhog thought. He blinked, frantically.

“I hear that Tom Brady doesn’t eat strawberries,” the groundhog said as Meme approached the table. “Isn’t that wild.”