The stars have secrets yet to reveal and the planets aren’t talking. 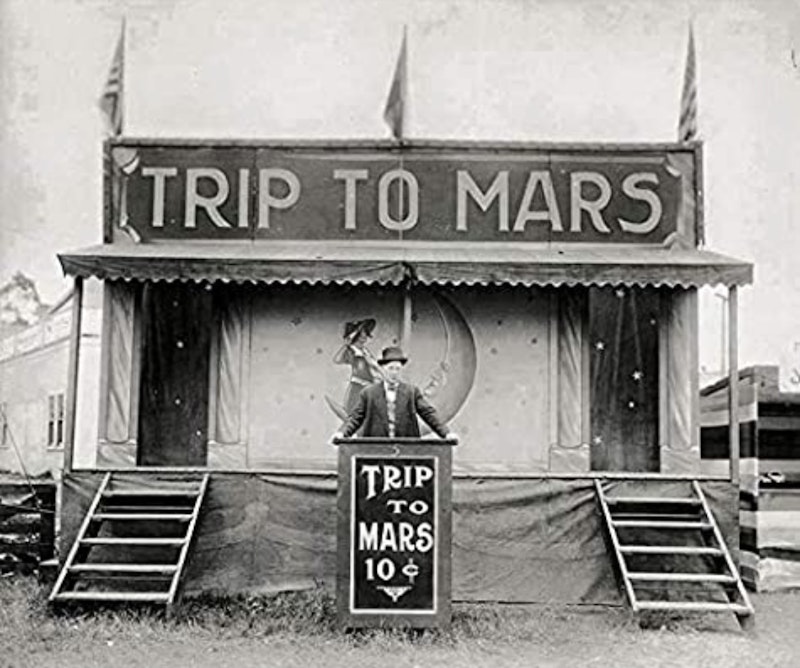 If only we could pick and choose a planet like we pick our noses. There’re approximately 300 million inhabitable planets similar to earth somewhere and we’re stuck on this crappy one. So much for freedom of choice. Some parallel space of prison captives in a multi-verse. Or a variety of locales where you can send people to remote penal colonies. Possibly a self-imposed exile, to be held prisoner of everything and everything in its place. Mars is called the glowing red planet because Martian soil is made up of iron minerals oxidizing to give its reddish glow.

Who needs to know any of this for certain? Named after the God of War it could consist of ages-old blood shed from endless wars. War of the worlds seems legit right about now. Mars is almost the same size as earth and has two moons to earth’s one. It’s confounded scholars for centuries and even the likes of a rock star reinvented as space alien. Is there life on Mars?

To touch the stars or better yet to wander around up there floating around maybe all the questions could be answered. The most powerful space telescope cameras say cheese and click snap shots of little green men materialized in mind’s eye flickers like deteriorating newsreel clips. Theories abound on the subject but there’s no definitive explanation. There’s nothing that can explain why we’re here. Evolution played its bit part in the big show storyline. The stars have secrets yet to reveal and the planets aren’t talking. All the learned men of letters can’t agree on the topic. Even the new age types say we’re golden stardust finding a way back to the celestial garden.

Then there’s the dilemma of all that wet liquid stuff called water. It’s estimated our bodies are made mostly of H20 fluid in the chemical equation. The better part being water, the elixir of life, the rest organic material mixed with waste byproducts. Humans are biologically full of feces in a fleshy container surrounded by water. The planet is covered with water; the rest consists of a dirt globe filled with people who happen to be constantly full of it.

Creation’s courtesy of you favorite god. Searching for gods too far up, too far out there. Inherit the solar wind. Lost souls eclipsed by each shadow. Religion of the flesh is equal to preaching the words of life and love like a door-to-door salesman. Nothing exists on Mars... do you want to buy a bridge? Sell any heavenly body’s orbit to a housewife in neighborhood of the Milky Way. Kids think about space the way they see it, cheesy sci fi movies on TV.

The triple features that 1950s movie houses ran where space creatures from Mars attack to take over the planet. Steal the natural resources while destroying our world or just passing through for a quick fast food meal with us as the main course. Some kids want to be astronauts when they grow up. Instead of the usual fireman, cop, hair stylist or even president. Might as well be from another planet on that last occupation. Creatures stare up at the sky, look at the moon and ponder the constellations. Never knowing they were always there. All they had to do was close their eyes.

NASA and Space X are selling tickets for advanced reserved seats aboard a round trip shuttle rocket. For the reasonable price of half a million dollars plus taxes. You too can fly to Mars, the moon or some lesser destination. There’s even a one-way ticket for the recent dearly departed. Gather at the river in the sky. A stairway to the stars on gossamer wings. The cosmos flows like a river of arteries and veins. Another tributary leading to the deep sky blue sea of space. Floating on a gondola along the canals of Mars. The Spiders From Mars lead the way to another dimension of time/space. Meanwhile Ziggy Stardust is drunk, passed out on the sofa. The angels are tired of flying around in zero gravity. There’s nowhere to land. By the hand of god get yourself a ticket. Bring the whole family.

Take a trip on a carnival spaceship to the furthest reaches on a journey to the center of your mind. Get back to that old time religion.Does the devil have your back? We’re about to take off. Please keep your arms and legs inside the conveyance. Hold firmly on the restraint bar. Do not attempt to exit the ride while it’s moving. Flash photos and selfies aren’t permitted. No standing or moving while the ride’s in motion. There’s no smoking, eating or drinking allowed on the space ride. Keep your head low away from the sheltered ceiling sky and your eyes on the fire exit. Countdown will commence shortly.

Space was always the place. Everywhere you look and see is all space. True, the Milky Way and Mars are mere candy bars here on earth. There is a vastness in the great blue beyond. Way out yonderpast the street signs. There’s no direction there. No right or left. No up or down. Nothing to hold you in place. No special way to arrive. No leaving where you can never get to. A rinky dink ride through a dark room with unspectacular sound effects, spotlit on flimsy sci fi props.

A scene from George Melies’ Trip To The Moon shows a theatrically cartoonish animation of a space rocket hitting the man in the moon’s eye. Boink! Stuck in the moon’s eyeball. Sinatra crooning “Fly Me To The Moon.” Moonshine sipping Moon pies and Moon eyes and green cheese cows jumping over the Moon. A large hairy creep’s fat ass hanging out of the car window. No self-respecting Martian would ever go there. They prefer Mars. The moon is too crowded these days. Would you like to swing on a star?