Woe Is Me, How About You? 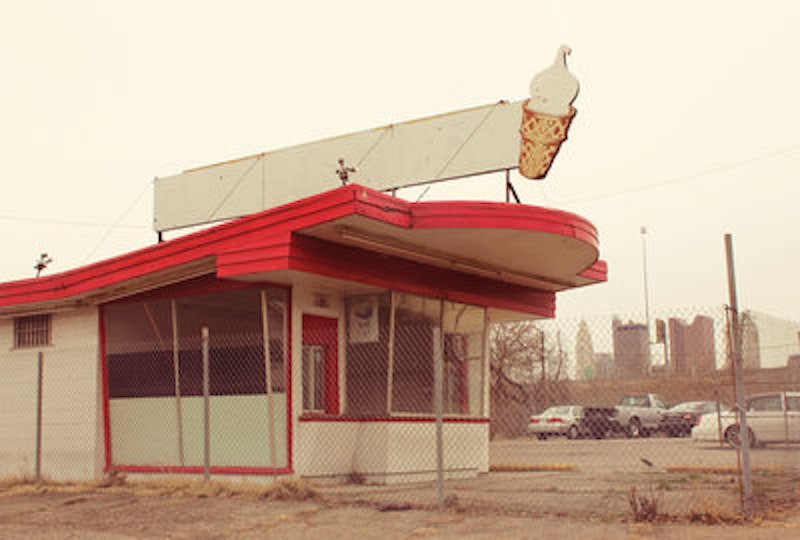 I have a thing for low and lonesome. First clue hit me on pre-school era cloudy day road trips. I’d zone out in the back seat of my parents’ aqua 1957 Chevy wagon, where I’d lean my forehead against the window, hard, so I could feel the bumps in the road. Inexplicably, this move helped me soak up lonely rural New Jersey scenery and feel sorry for empty collapsing houses, abandoned farms, and best of all, vacant failed ice cream stands built to resemble windmills. My social conscience was not keen, but I did feel bad/good about the structures, as if the smashed panes were sad eyes, and sagging hangdog rooflines struck some internal minor chord.

At that point I didn’t know about minor chords. All I knew was that certain music at certain times sounded unhappy, spooky, and fixing’ to thunderstorm. But I knew what I liked. And that was “Ghost Riders in the Sky,” played by my mom on the ukulele.

You might recall the oldie pop cover by Johnny Cash of this still older, bombastically melancholic western standard written in 1948 by Stan Jones. While my mom was no Man in Black, never mind Frankie Lane, Vaughn Monroe or other such older-school big-voiced belter, her plinky-plinky version was rotten with minor chords and just all right with me. Red-eyed cows.  Hooves made of steel. That Devil’s Herd lullaby of the damned put me in dreamland toot sweet.

Terrific memory, huh? My typically evasive mom denies everything. While I’m convinced it’s true, she claims I’m talking through my Stetson. She’ll have none of it. Get this though. The woman does own up to bedtime strumming “The Ballad of Zebra Dunn,” another old cowboy song. Trouble is, no minor chords in that one. So my mom and I remain at loggerheads over those apocryphal steel hooves.

Regardless, of something related I am sure. The summer before kindergarten I asked to be taught the ukulele, though my agenda was transparent. I wanted to learn just one sad chord. Only that. Specifically, I wanted to learn a minor chord for the purpose of striking it over and over and over. At some level, I realized whole tunes, or frankly, even so little as individual measures, were entirely superfluous. A precocious child, I coulda been, if not a contender, at very least John Cage.

What’s more, much as babies instinctually swim like salmon during a behavioral grace period, I was immune to repetition-based boredom. Below a certain age, kids are able to sustain repetition so intensely repetitious, that in the wrong hands it can liquefy solid rock.

I walked to kindergarten, alone, for an astonishing eight residential blocks to Barlow School on Front St. in Plainfield, New Jersey. And I loved it too, especially sad cloudy days. Partly sunny days wouldn’t do. Dark days put me in high spirits. They went down like post-breakfast candy corn. Add heavy rain to the mix and I was giddy in my seriously black and buckled foul weather gear, my regulation ensemble crowned with a stout rain helmet. I left early on rainy days so I’d have enough time to watch gutter water gush down storm sewers at almost every intersection, and cut myself enough slack to cast a dirty dead popsicle stick or two in the maelstroms.

Dark school days remained my favorite throughout primary and secondary school. Dramatic thunderheads, oppressive, pre-blizzard gray, or just everyday full-tilt overcast, so long as classroom lights blazed and I could sustain a fantasy of the world ending before gym class, I was the happy clam.

This was nothing I discussed with anybody at school or home. I saw no percentage in cultivating an odd kid out rep. I claimed a few friends, an after-school crew with whom I could pretend to exchange gunfire. We did not speak much about our feelings at the time. We also drew war pictures and made explosion noises while we drew them. Such play fare was strictly ho-hum tuna casserole main course. Melancholy was dessert and personal.

At the time, it never occurred to me that a taste for melancholy might run in families. Later on, I did read about the pop Victorian malady of Melancholia, but I determined that was something different because feeling fake bad was kinda fun.

So I didn’t blink when my mom put up a print of the sad Charles Burchfield painting “Ice Glare” in our living room. Cool! I soaked up that picture every which way as a child, from the corner of my eye while watching TV, or staring it down head on, waiting for Christmas Eve to be over. I recognized that wan light on the old black car and dreary winter street and somehow it gave me pleasure. That’s crazy! And funny too.

My Great Chain of Melancholy since gained many links. It was no stretch from Charles Burchfield’s oils to the minor diminished 7ths of Roger McGuinn’s 12-string Rickenbacker electric. The Byrds sounded like no band I ever knew, yet were exactly what I needed to hear. In time, rockers Tom Petty, REM and Gin Blossoms added links to the chain, as did painters Edvard Munch, Edward Hopper and George Bellows, writers Lawrence Durrell, T.S. Eliot and H.P. Lovecraft, and cartoonist Ben Katchor.

Melancholy’s often not-so subtextual, self-conscious comedy might be its saving grace. Perhaps pretending to feel sorry, and burlesquing about it, redeems the sentimentality. I dunno, but I know what I like.

Play “Ghost Riders in the Sky.”