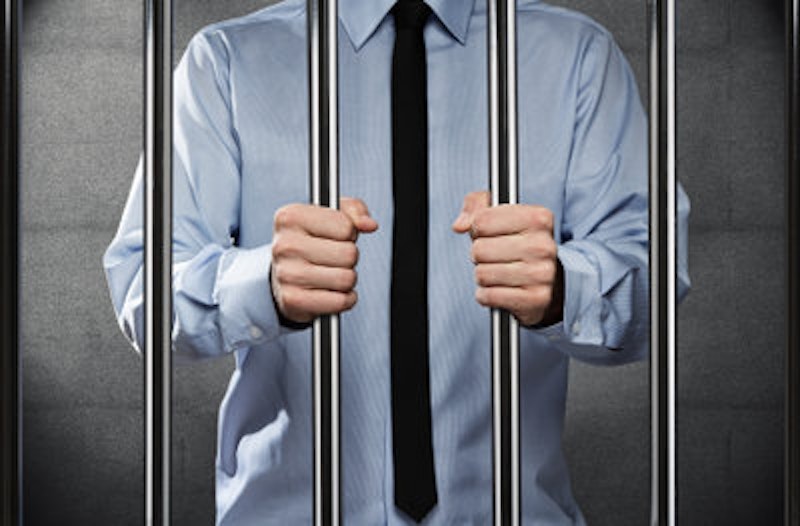 If you're going to be a criminal, white collar is the way to go. It's superior in every way to blue collar, which is strictly a game for suckers. Blue-collar crime is high-risk and low-reward, while white-collar crime is often low-risk and high-reward. Let's say you're the blue-collar criminal type here in Virginia. If you take something worth $5 or more directly from someone, you can be charged with grand larceny. That's right, you won't be able to get the Coke and fries with that Big Mac you've pick-pocketed a fiver and committed a felony for. You'll have to choose one.

Embezzlement is a particularly attractive option for white-collar perps. Learn some bookkeeping and you can get access to piles of cash, at least if you’re overseen by a complacent management. That's what Melissa Morris did at Industrial Machine Manufacturing Inc., right here in the Richmond area—in Chesterfield, Virginia. Cooking the books and writing company checks to herself, she was able to embezzle $464,764, beginning in 2006.

Morris recently got convicted (it made the front page of the local Richmond Times Dispatch) and was sentenced to 50 years in prison. Pretty harsh, right? There's a catch though—45 of those years were suspended, leaving her with five, but judge T.J. Hauler then suspended execution of half of that, so she ended up with a 2.5 year sentence. Morris risked 30 months in a state penitentiary for a gain of nearly half a million dollars. For a criminal, it doesn't get much better than that.

What’s truly puzzling is the fact that Hauler stated in court that he doesn’t believe the 45 year-old-Morris' claims that she's blown all the cash and is too broke to even rent an apartment. If you think she's holding onto some of the money she stole, why do you knock the sentence down from 50 to 2.5 years? Sentencing guidelines are certainly a factor, but to give this brazen criminal the minimum possible sentence is a travesty of justice. Where's the incentive for Morris to fess up and cough up the cash when there's no added punishment for lying?

That must’ve been some apology Morris delivered to the company's employees in court to get the sentence trimmed like that. It must’ve been right up there with former Defense Secretary Robert McNamara's mea culpa for the Vietnam War. Industrial Machine Manufacturing certainly paid dearly for Morris' thieving ways. The 60-year-old firm had to cancel a profit-sharing plan, laid off five employees with 25-30 years of service and gave some of the 13 employees 14 percent haircuts on their salaries. That's a lot of pain. Morris' sentence mandates that she make monthly restitution payments of  $250 to the company she systematically robbed for nearly a decade once she’s released from prison, but that's not going to do much for anyone.

The convicted embezzler and her husband had a collective annual income of about $115,000, with Morris receiving $40,000 as the company’s bookkeeper and her husband earning $75,000 as a fireman. That kind of money will get you a pretty pleasant life in Chesterfield, Virginia. Certainly this should be factored into determining the sentence, as there was no hardship involved. Defendants such as Morris get a break for having no prior convictions, but the law fails here because she had dozens and dozens of prior thefts (each time she wrote a check to herself) that weren't convictions because she hadn't been caught yet. She stole repeatedly over an eight-year period, but the law sees her as a first-time offender. Justice is blind here, just not in the way it's supposed to be.

No system of justice where there’s a random connection between societal damage caused by the crime and the sentence itself can be called fair, but that’s the current situation in the U.S. Kalief Browder can rot in solitary confinement for two years on Rikers Island without being convicted of a crime (allegedly he stole a backpack), while Melissa Morris will get two and a half years for actually stealing about 2000 times the value of what Browder allegedly stole. She messed up people's lives and forced the Industrial Machine Manufacturing's president, who was dying of cancer (he died in March, 2014), to deal with his company going down the tubes as his life slipped away.

The money could be anywhere—the Cayman Islands or in bitcoin perhaps. Morris can get out of prison and enjoy the loot soon. It's hard to believe you can burn through $464,764 in mattresses and vacations (which is all investigators were able to pin to her), especially when you have a full-time job. Maybe, after she's released, she'll eat filet mignon and lobster a few times a week and as she savors a nice bottle of Château Margaux, she’ll reflect that her time in jail wasn’t so bad. And if she drinks enough of that Bordeaux, maybe she'll even pick up the phone and call T.J. Hauler. She owes him a big thank you.