Wilt Chamberlain’s House on the Hill

He was a big man in a big city and sought to build a home worthy of his 7' 1" height. 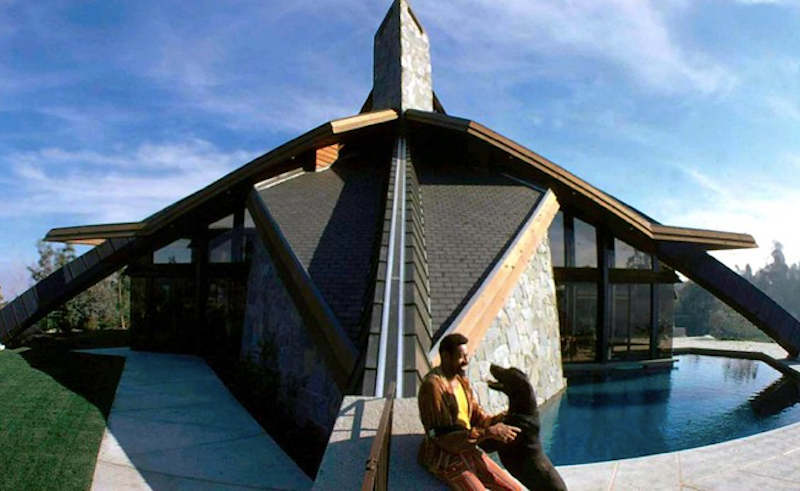 In the early-1970s, Wilt Chamberlain was the king of Los Angeles. He was a basketball star for the Lakers, acted in films and television, drove around town in a classic Bentley, partied at the Playboy Mansion and played weekend volleyball on Santa Monica Beach. He was a big man in a big city and sought to build a home worthy of his 7' 1" height.

Wilt’s house at 15261 Antelo Place in Bel-Air was completed in 1972, christened “Ursa Major,” and is a muscular mass of concrete, steel and stone surrounded by water. Designed by architect David Rich, it was inspired by Brutalist architecture and the spirit of Frank Lloyd Wright. Rich was tasked by Chamberlain to locate a hilltop location worthy of a trophy mansion. The architect scoured the Santa Monica Mountains via helicopter until he found a 2.5 acre lot with views of the ocean, city and surrounding mountains. The spot was a former Cold War-era anti-aircraft missile site.

Rich drove Chamberlain to the lot and drew three shapes in the dirt, a triangle, a circle and a square. “Wilt stood inside each one,” Rich recounts on his website [https://usmodernist.org/rich.htm]. “I said, ‘Wilt, this is your house, which shape feels right for you?’ The triangle was where Wilt felt immediately comfortable.” Wilt’s home would be dictated by triangles. Chamberlain bought the lot for $150,000. Construction cost $1 million.

Wilt’s nickname was “the Big Dipper” since he always had to dip his head to enter a room. His dream home didn’t have this problem. The 2000 pound, five-foot thick front door was 14-feet tall and led into a great room with 40-foot high ceilings. “The volumes, spaces, door heights and such were not designed for the tallness of the man, but rather the sense of self, and a love of openness and great spaces,” Rich said. The house utilized 200 tons of stonework. Chamberlain consulted on the design process. “I have friends of all ranges of sizes,” Wilt said, “and it’s important to me that they feel comfortable in the house.”

Chamberlain wanted the home to feel like a cathedral to nature. It was built with five freight cars of old-growth redwood evoking a forest of trees. Floor-to-ceiling windows allowed ample natural light. A sunken conversation pit in the great room led to a massive fireplace with a chimney built from stone from nearby Bouquet Canyon. A 16-foot Venetian glass chandelier dominated the dining room.

Wilt was a playboy who loved hosting parties and showing off the “kinky details” of his palace. His notorious bedroom (where he slept with some of the 20,000 women he bragged about in his memoir) was carpeted in mink. There was a 72-foot bed with covers sewn from the nose fur of 17,000 wolves. An 18-karat gold Cleopatra-inspired sunken bathtub sat at the foot of the bed. On the ceiling, a triangle-shaped mirror retracted to reveal the open sky. The master bathroom was wallpapered with silhouettes of nude women while the shower was 12 feet high.

Chamberlain loved water elements. Reflecting pools flanked the entry to the home. A massive moat swimming pool surrounded the house and extended below a wall into the great room. This allowed people to swim in and out of the house. (This wouldn’t be allowed under current building codes.)

There was a restaurant-style kitchen, a billiards room, a gym and a redwood sauna. There was also an X-Rated room detailed in a 1972 Lifearticle: “A five-sided room, its ‘floor’ a circular water bed, eight feet in diameter, covered with French black rabbit fur. Custom wedge sofas in purple velvet fill space from bed to walls. Purple velvet covers the wall and the ceiling which is lit with tiny bulbs like stars. A timed light bounces a spectrum of colors around the room giving an outer-space atmosphere to the whole thing.”

Wilt was a fervent Republican who stumped for Richard Nixon in 1968 and 1972. His Bel-Air neighbors included Ronald Reagan, Elizabeth Taylor and Alfred Hitchcock. Wilt yearned for privacy but tourists often showed up requesting a personal tour. He allowed his home to be photographed for media outlets to quell public curiosity.

Wilt’s basketball achievements are legendary. He scored 100 points in a game, had 55 rebounds in a game, averaged 50 points a game for a season, and never fouled out. He currently holds 72 NBA records. Former NBA all-star Johnny Kerr shared a story about Wilt’s power on the court. “Once Wilt got upset with me and dunked the ball so hard that it went through the rim with such force it broke my toe as it hit the floor. I was embarrassed to let everyone know I got a broken toe from one of Wilt’s dunks, so I went to the other end of the court, acted as if I tripped, grabbed my toe and went out of the game.”

In 1973, rumors persisted that Wilt ran out of money paying for his new home. He left the Lakers to play for the San Diego Conquistadors in the fledgling ABA. His new team paid him $600,000 a year as player/coach (his Lakers salary was $250K). The Lakers sued him for breach of contract preventing him from playing in the ABA, though he was allowed to coach.

Chamberlain wrote about his house in his autobiography Wilt: Just Like Any Other 7-Foot Black Millionaire Who Lives Next Door. “It’s nice to let people know you have money. It’s a natural thing to want to have a big car, a nice house, and a nice suit when a lot of times you were deprived of them and you really wanted them. When you can afford them, you may be somewhat flamboyant about it.”

In 1999, Wilt died in his bed of heart failure at 63. The house has had two owners since his passing. The first were the show business couple George and Maria Semple. The second was a Russian investor who had no idea who Chamberlain was. The house has been renovated several times and currently has six bedrooms and eight bathrooms within 9395 square feet. The home went on the market in 2018 for $18 million. Four years later, it’s still available for a reduced price of $11.9 million.